Now, normally my total phobia of robots is enough to keep me from liking any price of media where they’re portrayed as anything other than non-sentient servants or an enemy meant to be crushed. I mean, there’s a reason I’ve never seen Wall-E and have no plans to. So you know that there must be something really special about Blue Delliquanti’s O Human Star to warrant its place here in Drawn to Comics. The scary thing is that O Human Star not only has one flawed but absolutely lovable robot, it has two. 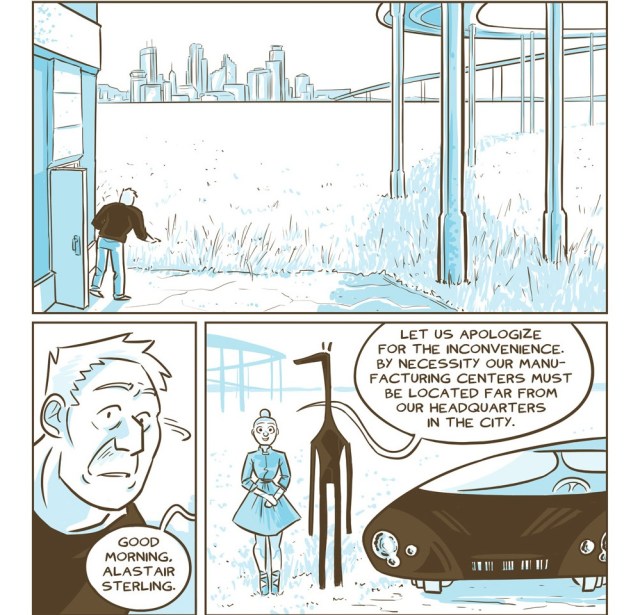 This webcomic starts with its main character, Alastair Sterling, dying. A few pages later, he wakes up in an unfamiliar world with a few familiar touches. Once he finds out that those familiar touches are due to the fact that he has awoken sixteen years into a future based on his designs, he also finds out that he is now a digital copy of his memory and mind living in a robot body. Alastair, or Al, is told that his partner (both in business and romance), Brendan has continued on his work in robotics and artificial intelligence. While the driving story takes place in 2021, there are a lot of flashbacks to the days when Brendan and Al first started working together in robotics and eventually started living together as a couple. These scenes show the nice dynamic between the older, more gruff and closed off Al and the younger, more optimistic Brendan as they push each other to advance in their science and also grow closer to each other as people. 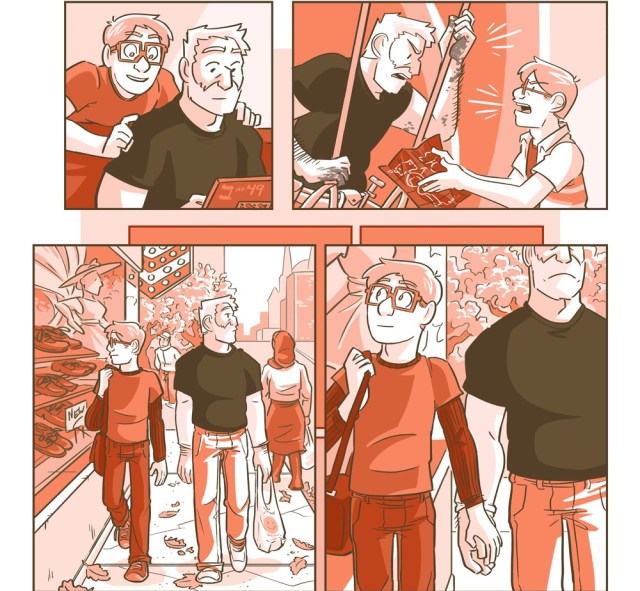 The other robot star of the comic is Sulla. She’s an enthusiastic, joyous, ball-of-energy teenage girl robot who has been adopted by main character’s old partner. But what really causes Al’s world to spin is when he finds out that this teenage girl is essentially a robot clone of himself. In his attempts to bring his lover back to life, Brendan created a robot with his exact personality and mind, just without his memories. Sulla should, in theory, be the same person as Al (although only sixteen years old). However, when she was allowed to grow up as her own person, she came out as transgender when she was about thirteen. While she may be a different gender than Al and is much more affable, she has his same brilliant mind for robotics.

This situation between Sulla and Al brings up a lot of interesting questions. What would it be like to be able to spend time with a younger, differently gendered version of yourself? What is the difference between Al and Sulla that ended up with her being trans? How do robots even have gender?

While Al might be the main character, some of the most touching moments come from the stories that center around Sulla. Not only does she have to deal with being a teenage girl, but she also has to worry about being both trans and a robot. There’s a devastatingly cute moment where Al and Sulla are sharing breakfast and he makes a comment about how he thinks she definitely passes. She is so excited and so happy, but then she realizes that he means that she passes as a human and you can see her face drop. Even though the entire concept of passing is ridiculous and messed up, and telling a trans* person they pass is not really the compliment you might think it is, Sulla’s reaction really rings true to her character as an almost sixteen year-old teenage girl, and resonates with me as a trans woman reading it. This is what makes the characters real, they are flawed and full of quirks. And then there are all of her interactions (or rather, lack of interactions) with the person she has a crush on. When she first sees this androgynous girl at a bus stop, she’s immediately smitten and then adorably makes up an excuse to follow her to the library. The intensity that she throws into every action combined with her earnestness and hopefulness really gives the comic it’s heart. 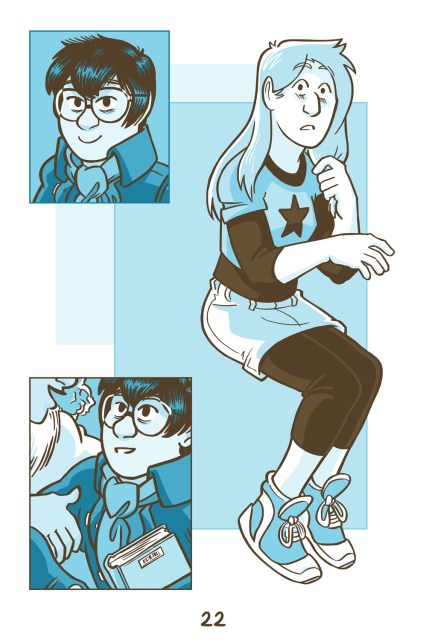 Delliquanti has very creatively used the coloring and line work of the comic to add to the feeling that we are living in a futuristic world. The clean lines and sparse use of only blue, black and white create a very smooth and surgical kind of atmosphere that calls to mind the kind of bright, shiny future that is seen in Star Trek or I, Robot. This is especially contrasted against the reds and grays of the flashbacks that make those times seem absolutely rustic.

Blue Delliquanti is a bisexual artist and writer based in Minneapolis, Minnesota. Other than creating this wonderful webcomic, she also has had comics featured in Womanthology and Smut Peddler and will be featured in the upcoming queer sci fi and fantasy collection Beyond. If you enjoy her comics as much as I do, you can purchase two different graphic novels of O Human Star, buttons and art from her.