It’s been a busy week for anonymous sources in Hollywood, what with all the tongue-wagging and speculation about Kristen Stewart and Alicia Cargile. Although the two confirmed gal pals used to appear in public often, dressed comfortably, sometimes holding hands, boldly showing the world how friendly they were towards one another, it seems that the pair haven’t been snapped by paparazzi in weeks. Because Kristen has made it abundantly clear to the press how much she enjoys having her private life dissected by tabloids, it’s awfully surprising that the pair would suddenly start keeping things so low-key. (Ed note: this is sarcasm.) 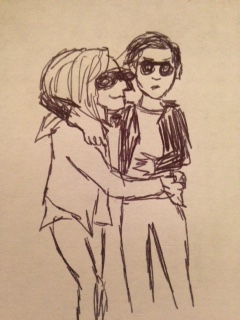 Artist’s rendering of Alicia and Kristen reveling in the spotlight

According to the tasteful reporters at Radar, Kristen and Alicia appear to have amicably ended their relationship, citing Stewart’s busy schedule of sulking, scowling and hanging out with wolves as the main cause of the breakup.

A source tells Radar, “They have a lot of love for each other and they always will, but Alicia does not want to be a part of her jet-setting life anymore. They had come to an understanding that this could simply just be a case of the right person, but wrong time.”

As we all know, there is simply nothing worse than being with a partner who expects you to jet-set all the damn time! “I’m sorry, babe, but I don’t think I can deal with another party on yet another boring yacht. I’m so over all the champagne on the private plane, can’t we just stay home and watch Empire or something?” Come to think of it, they do seem to spend an awful lot of time walking around LAX together…

Other publications go on to speculate that there might be a third party involved, since Kristen Stewart cheated on a person once and it was a whole thing and clearly she can’t be trusted to stay loyal to any partner ever again.

Later, Enstars followed up with yet another anonymous source (a very lucrative field in the greater Los Angeles area), this time with a firm rebuttal.

Phew. We here in the Autostraddle Vapid Fluff department are deeply invested in the continued romance between these two, and we can only pray that their love burns eternal. If there’s any justice in the world, the pair will emerge from their presumably very sexy hideaway, beanies a-slouched, lattes firmly in hand, ready to awkwardly avoid attention from the adoring public. Guys, I’m so sorry we’re like this. Godspeed, you crazy kids.