“Studies in Modern Movement”
by Brittani 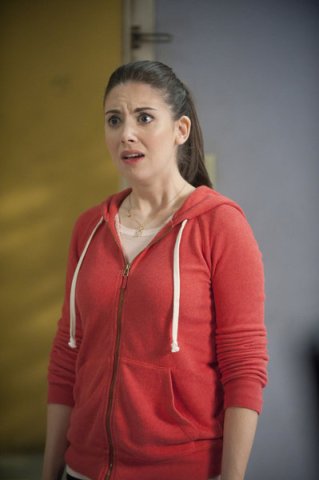 Britta: When you become roommates with friends, the things you love about them become the things that make you want to smother them with a pillow.
Annie: But that’s unacceptable to me.
Britta: Then… I’m lying?

Predictably, everyone shows up except Jeff who runs into Dean Pelton, AKA Craig, at the mall and gets blackmailed into a pseudo date. How long had it been since you heard “Kiss from a Rose?” Doesn’t matter when. The answer is too long. 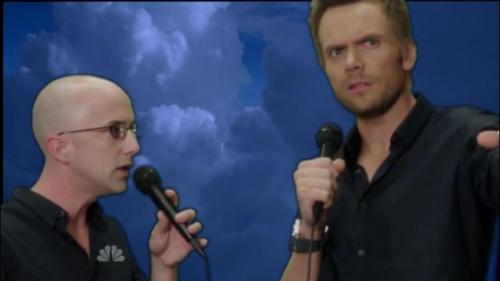 Dean Pelton: You know this one, Jeff. We’ve sung it a thousand times together…in my mind.

Realizing that Troy and Abed’s antics may get annoying, Annie struggles against her nature to go with the flow and not flip out about the move. Loosie Goosie Annie is as good, if not better, than Blowing it off Annie.

While being limp, something gets broken. Pierce offers to fix the outlet cover so Annie won’t get money taken out of her security deposit. He only makes matter worse and when he goes to fix the further repairs, the window slams shut and he inhales the hazardous fumes from the paint. He’s later found by Annie’s slum lord. 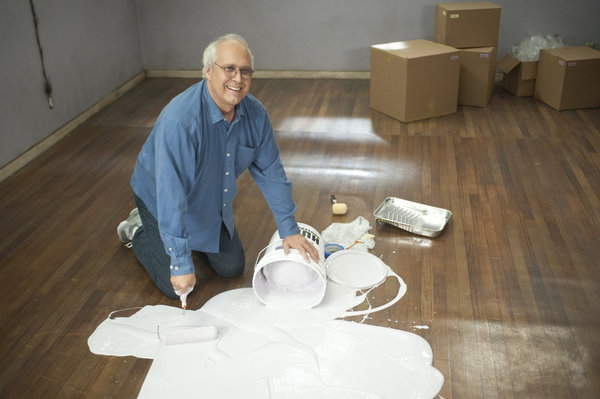 Britta picks up a hitchhiker on the way to drop off boxes to prove secular morality exists. It seems Shirley wins the round when the guy asks if they have found Jesus. That is until he tells them he thinks he is Jesus.

Jesus: Now, with your permission, I’d like to sing a little song about race mixing. This one’s called “Don’t You Do It.” 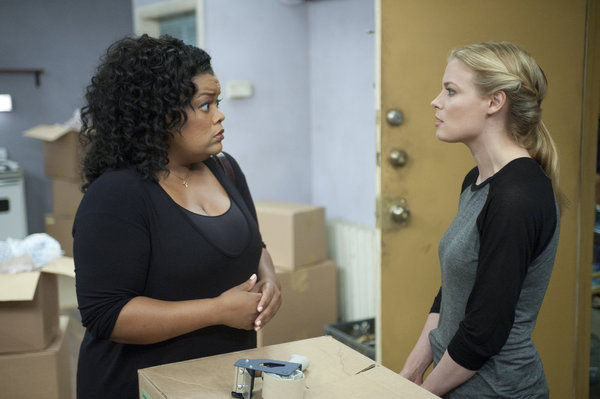 When Annie sees her new bedroom, she is less than pleased. She’s sick of trying to adapt to other people and wonders why Troy and Abed won’t make an effort for her. Initially they pick the Dreamatorium over Annie but they changer their minds and move into the blanket fort in her stead. They realize they need her as much as she needs to get away from Spaghetti. 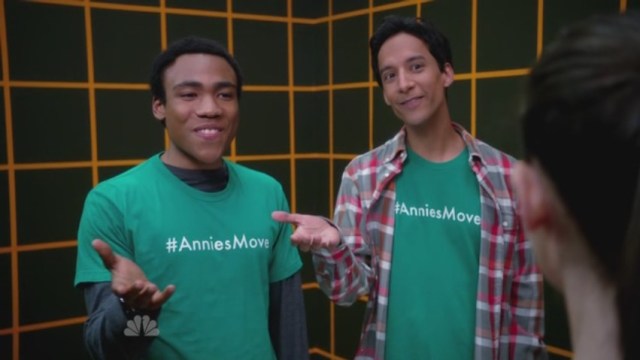 Abed: …And what gets out kool-aid stains?
Troy: We already know that the opposite color kool-aid doesn’t work.

“The Treaty”
by Brittani

Ben: I didn’t really do Model United Nations in high school. Oh wait. I super did!

Ron is trying to rope Tom into taking his old job back. He knows Tommy is struggling but doesn’t want to take his job back because of his pride. Tom takes his job, as we all knew he would have to eventually.

Chris is investigating what went wrong with Jerry’s daughter after four dates. She hasn’t returned his last two calls. When you’re on edge all the time and lose touch with reality like you do sometimes when you get into a new thing, you don’t chalk this up to the other person being busy or pure happenstance. It means the ship is going down and it’s going down fast so he launches a full-fledged investigation.

After things get heated in the UN meeting because of the tension over their unfortunate break-up, Ben takes a stance and says he can’t be friends with Leslie. Naturally this leads to Denmark declaring war on Peru.

Ben: Excuse me Madame Ambassador. Excuse me.
Cassidy: I’m not finished.
Ben: Oh really? Then why do I have the microphone? 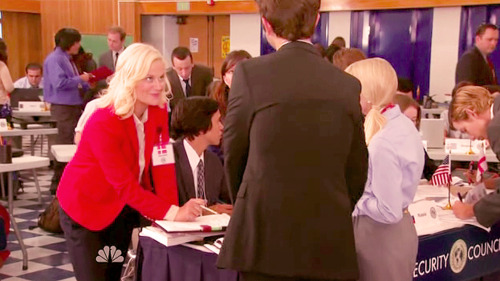 Leslie: Who is ready to join the Coalition of the Willing?
April: The Moon shall join your coalition.
Leslie: Yeah! We got the frickin’ moon. What are you gonna do without tides, Peru?

Ann tells Chris that he imposes his perspective and lifestyle on the people he dates and it might be too much. He should back off if he wants things to work out with Melissa.

Ann: Jogging is the worst, Chris. I mean I know it keeps you healthy but God, at what cost? 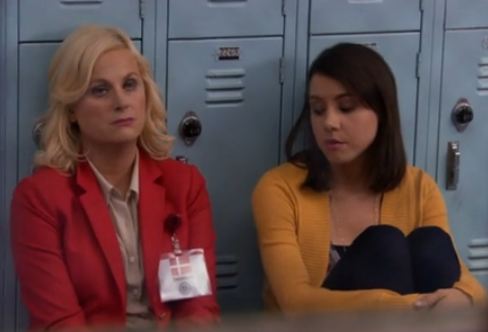 Community also did United Nations this season. Do sitcoms usually have this much overlap and I never noticed before? Have we run out of ideas as a people? Is this the end of TV as we know it?

“The Ornithophobia Diffusion”
by Lizz

Guess what happened on Big Bang Theory this week?! I’ll give you a hint: not plot development. In a bizarre twist of fate this episode seems to have been taken right out of the beginning of last season. Penny asks Leonard to catch a movie as friends, and both of them act as if they haven’t been hanging out as friends for a season and a half. I mean, Leonard has had a full relationship and break-up since he and Penny dated. Either way it’s the usual stab at “can exes/boys-and-girls/neighbors/any-two-people be friends?” with the expected added dose of Leonard being Really Fucking Nerdy (that’s a good thing). The answer is: sort of. 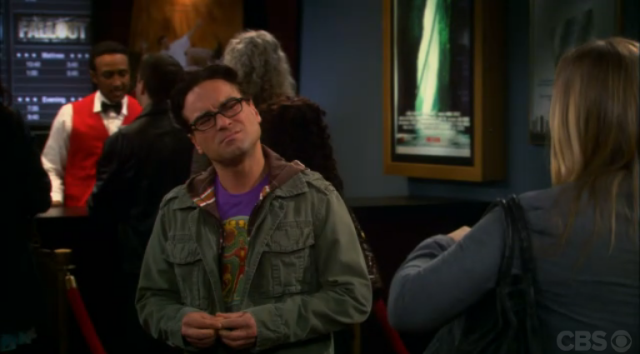 Basically Penny wants to see a Jennifer Aniston movie but Leonard wants to watch “an amazing documentary about building a dam in South Africa.” I would totally go see that documentary.

Leonard: You always picked and it was always the same movie. An hour and a half of beach houses in the rain until the girl turns around and realizes love was here all along!
Penny: Come on! That is a great movie! And it starts in ten minutes.

Over the course of the Not A Date, we learn some amazingly shocking things that Definitely Aren’t Stereotypes about relationships. Boys do things girls want to get sex. Boys only pay for things to get sex. Girls always expect boys to pay. Girls say they don’t want anything to eat and then eat boys’ food! Isn’t gender fun? No, but actually it was funny anyways because Johnny Galecki rocks the 90’s world. Also, this one’s true, no one knows what to wear on a night out that’s Not A Date but, ohmigod, maybe it could be, yannow? 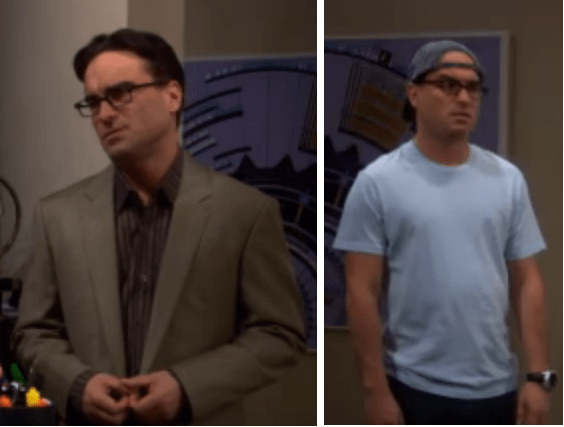 LOOK, THE PAINTING IN THE BACKGROUND ALMOST LINES UP!

Anyways, friend time all goes to hell when Penny flirts with a boy and then Leonard flirts with a girl and everyone says mean things about everyone else. Like, amirite? Totally last season.

Also Sheldon is scared of birds! 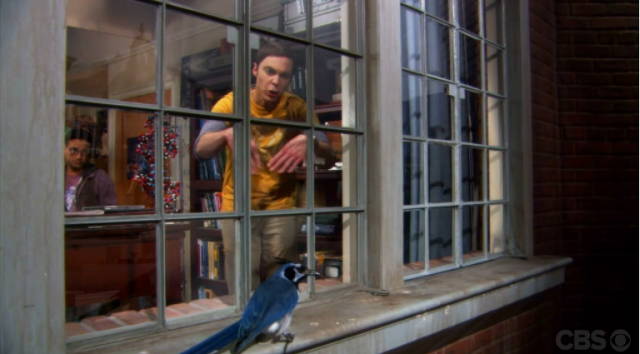 SHOO FLY, DON'T BOTHER ME, 'CAUSE I BELONG TO SOMEBODY

Penny: Really? On top of everything else you’re afriad of birds?
Sheldon: It’s called ornithophobia and someday it will be recognized as a true disability and the landlord will be required by law to put a giant net over the building… Which is unfortunate. Because I have a fear of nets.

But he gets over it. 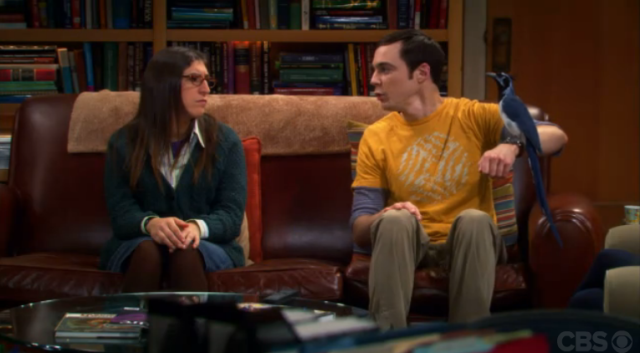 "YOU'RE JUST MY LITTLE LOVEY-DOVEY AREN'T YOU"

Amy: I guess you gotta have hollow bones to get some sugar around here.

Until it runs away. I mean flies away. Same thing. 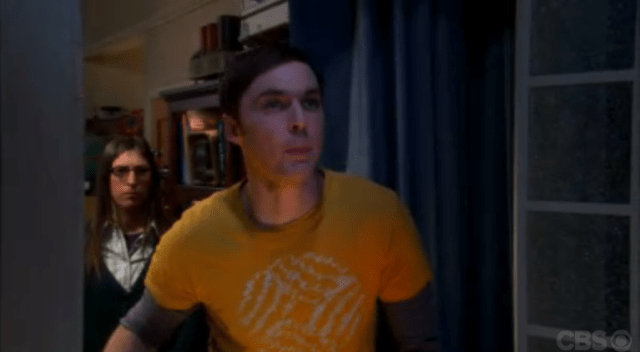 THIS IS THE SADDEST MOMENT OF SITCOM TELEVISION. I MEAN, THIS WEEK.