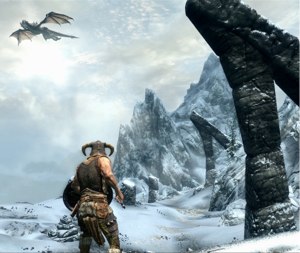 Are you playing Skyrim right now? Approximately 66.7% of the humans I know are, right at this very instant. My copy was delivered at 9:04 am by a UPS employee darting furtively toward my front door. He clearly understood the gravity of the situation. After all, every RPG-minded gamer I’ve met has lost a sum total of three years of their life to previous Elder Scrolls games, and with good reason, I’d like to think.

For the uninitiated, Skyrim (out now for the Xbox 360, PlayStation 3, and PC) is a sprawling role-playing epic that stays the course of its predecessor’s penchant for awe-inspiring vastness and wide open gameplay. While I missed the boat on every-single-other Elder Scrolls game due to being thrust into a gaming dark age of sorts, I’m not missing it this time around — hell or high water.

From the sound of it, and from the early buzz I heard while bopping around E3 in LA earlier this year, Skyrim pushes the bounds of gaming as we know it, peeling back the surface layer to reveal just what gaming can do as a medium for something more.

In Skyrim, this is accomplished through my personal number one gaming feeling: Open world exploration. At their finest, video games can rouse our slumbering imaginations, inspiring a kind of lust for the unknown that’s all too uncommon in our virtual day and age. You don’t merely play an amazing game — you tunnel right into the core of it, stake out a virtual outpost in your own imagination and make camp. 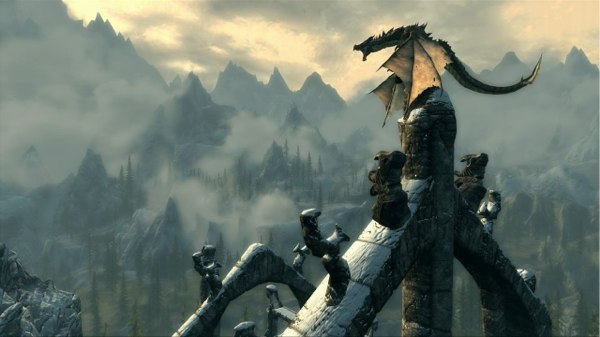 Joystiq really hits the nail on the head about this kind of transcendent gaming purity we’re talking about in their Skyrim review:

“Whether or not you know it, that same wanderlust that whispered into the ears of your ancestors and led them into the forests, into the oceans, still calls out to you. In those moments when all seems at peace, all seems safe, it’s that persistent, ceaseless call of “Yes, but what else?”

This is the deepest, loveliest world ever created for a single player to explore, and one that no one should deny themselves. This is a game about following Emerson’s advice, leaving the trail and finding that the most powerful force on Earth or Tamriel isn’t fire or sword, but the ever-insistent desire to know what lies beyond.”

While I haven’t had a chance to dig into the game myself yet, you may have! (But if so, what are you doing reading this article?!) If you haven’t, or you still don’t know what the fuss is about, check out the goods below.

Are you playing Skyrim? If not, what’s been spinning in your tray this fall, so to speak?