Last week, I attended E3, not better known as the Electronic Entertainment Expo. It was my first time, and while the consensus was that no One Thing stole the spotlight, there were still plenty of games to get all shook up about.

Beyond the retina-punishing garishness and the occasional short short, E3 was kind of like the Labyrinth. The one with the minotaur in Crete or whatever, not the one with David Bowie — but that one certainly has its place and time. In its outer circles you can while away your precious expo hours waiting in lines to play the lastest demo games; in its innermost circles — occupied by persistent, agile, or otherwise respectable members of the press, assorted PR weirdos, and various shiny Important People — you might be treated to exclusive hands-on gameplay, never-before-seen trailers or the ultimate prize: lackluster catering. 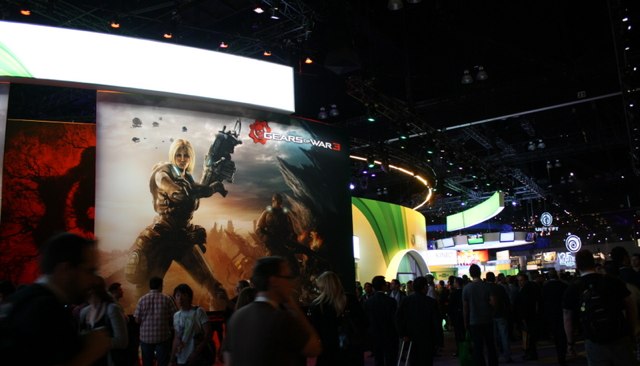 The week of E3 2011 has come and gone, and I lived to tell the tale. Wending my way toward those exclusive inner sanctums, plumbing the depths of the LA convention center’s gaming treasure trove one protein bar at a time, here’s what I liked best. 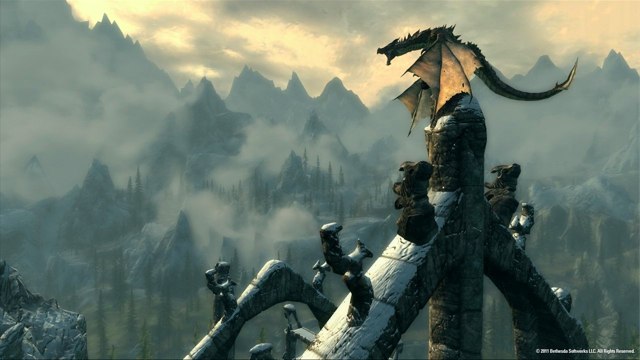 Elder Scrolls IV: Oblivion has been on my infinitely backlogged gaming to-do list since forever, and this year I’ll be able to get on board with a new installment of the expansive role-playing game from the get go. Set in a snowy ambiguously norse world populated by dragons, cat-people, elves and the like, this epic RPG is the one game I know I’m going to play for hours this year. [November 11, 2011] 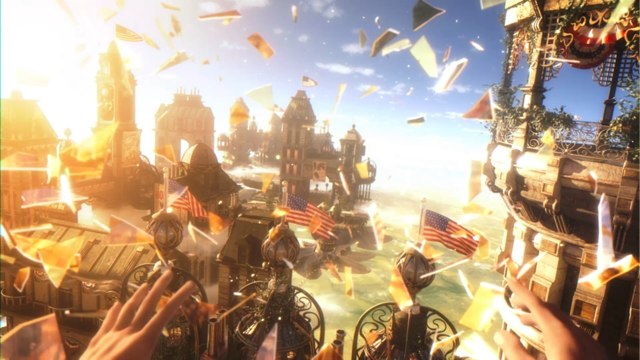 Watching people walk out of the unreleased gameplay demo for Bioshock: Infinite, every single otherwise jaded member of the press in attendance was grinning from ear to ear. Infinite (which may or may not occur in the same world as the hellish underwater Art Deco world of Rapture but probably does) is set above water, in the also hellish aloft air city of Columbia in alt-1912. A commentary on jingoism and American exceptionalism rather than a lesson in Ayn Randness, the world of Infinite looks just as fully-realized and beautifully detailed as the games that preceded it.

If you’re worried that the less aquatic follow-up will lose its unsettling horror edge: um, you don’t need to be. In Infinite, you play as Booker DeWitt, a chatty chap protecting a young woman named Elizabeth (with a knack for disrupting the spacetime continuum) from her former captor, the Songbird. And the Songbird — a hulking metal avian horror that makes Big Daddies look like Little Daddies — isn’t fucking around. This thing is going to haunt my dreams until I can actually process it (via shotguns and actual gameplay, in all likliehood). The demo revealed Elizabeth’s special flavor of super cool strategic interdimensional travel, which reminded me a lot of the YA novel The Subtle Knife, which obviously should be made into its own game. [Earlyish 2012] 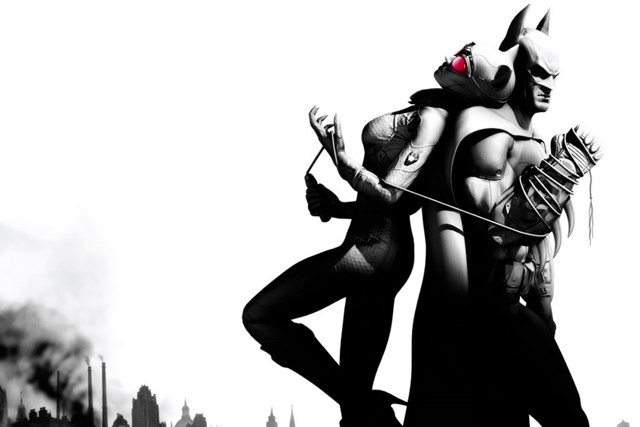 I’ve always been a Marvel girl, but in the right hands, the Batman franchise has an epic ton of potential. The last two movies, directed by the awesome Christopher Nolan, proved Batman’s still got it, and the last game translated that degree of awesome to a living gaming world. I had a ton of playtime with the new game, Arkham City, and it really won me over. Arkham City sets you loose in Gotham, and the entire city is open for exploration. From the combat to gliding your way around Gotham’s eery rooftops, the game looks to capture the essence of a comic book world in a way few games ever have. Also, you can play as Catwoman, who is just as ass-kickingly agile and ruthless as you’d expect. [October 18, 2011] 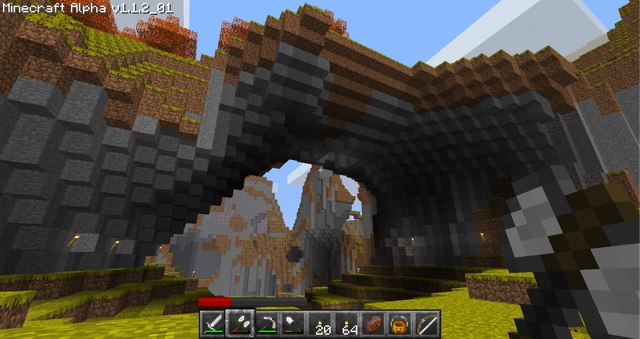 When I heard about this I seriously freaked out for 10 minutes and then maybe has to use my inhaler and do My Breathing. To me, Minecraft represents the infinitely imaginative essence of gaming in its purest, most potent form — but we’ve already heard me rave about that, haven’t we? It’s currently only playable on PC and Mac, but its new incarnations, coming to 360 (with Kinect integration!?) and Android, mean more Minecraft for more people. And that is a very good thing. [Fall 2011] 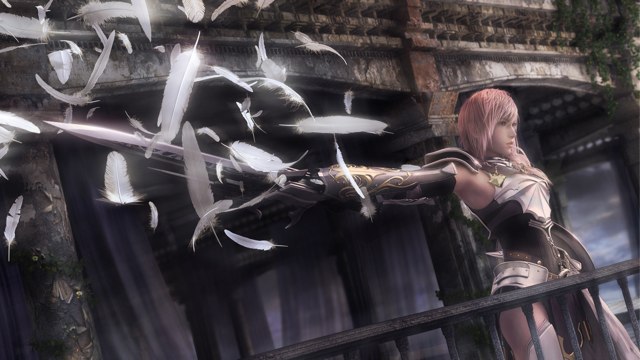 Square Enix, in an effort to make us forget the blasphemy that was FFXIII, is putting out a sequel set in the same world. If you’re familiar with the Final Fantasy series, you know that the games are only loosely connected; they don’t feature the same sets of spiky-haired heroes, the same style (the too-serious FFVIII vs. the classic cartoonish FFIX makes for a good example), or the same worlds. Even though I really enjoyed FFXIII (finally, after holding out hope for a good 10+ hours), I’m not particularly eager to relive its world. Presumably, FFXIII-2 is a do-over, building on the same story and stuffing it with more chocobos and more of the open world exploration that defines the series (for open world junkies like me, at least).

The demo I played maintained the same paradigm shifty combat system that made the predecessor surprisingly enjoyable (kind of like how trigonometry can be surprisingly enjoyable), with a real-time button mashy quicktime sequence here and there. If Square Enix can make good on its promise to fans of the series, we might forget all about FFXIII. But hey, I’ll be playing it either way. [Early 2012]

Rocksmith: Plug in your actual instrument and learn to play guitar. How cool is that? I mean, I’m pretty convinced I don’t have a single musical bone in my body, but this is rad.

Bastion: This colorful, ultra-cute but challenging isometric action RPG will be coming to the XBL Arcade this summer, and it drummed up quite a bit of buzz last week. The story of your tiny, adorable character is narrated by a guy who sounds like John Marston, which is incongruously delightful, from my experience.

Mass Effect 3: I didn’t get a chance to see the new trailer or gameplay demo, but it’s Mass Effect…I mean, obviously it’s going to be gaymazing. And other kinds of ‘mazing.

Assassin’s Creed: Revelations: When Ubisoft revealed this one at their press conference last Tuesday, I was seriously on board — until I saw the gameplay. I’m looking forward to a new setting (Constantinople, among others) the game looks great…but also it looks exactly like Brotherhood. And Brotherhood, multiplayer aside, was the spitting image of Assassin’s Creed 2. I wish it looked more innovative, but why mess with a winning formula? Well, because eventually that gets old.

The women’s restrooms: No really, these were amazing. Depressing implications for the gaming industry aside, the women’s bathrooms were unoccupied, impeccably clean altars to gender imbalance. In a week fueled by protein bars and flickering wifi connections, I think I ascended to a transcendent, meditative plane more times than I’d care to admit, just breathing in the quiet and the vaguely floral, gently fragrant hand soap.