I’ve finally made it back around to Final Fantasy XIII in my semi-epic queue of games to play. As a huge fan of the series, I thought I’d play it straight through, calling out sick and receiving my fluids intravenously as needed. Obviously that was not so, but yesterday I cracked down. Now that I’m through disc 1 (of 3), I thought I’d check in with some impressions, as I’m sure they’ll change radically over the course of the next two discs.

The very beginning of the game was agonizing. It really was. A lot of unexplained jargon (Fal’Cie! L’Cie! Sanctum! Something!) flew around for a boringly linear few hours while I hit things and then they died. Now, at hour 10 or so, there’s still is nary a town or black mage in sight, but somewhere around the 4 or 5 hour mark, I think I started getting it. I found myself enjoying FFXIII, in spite of the heft of my emotional baggage, largely tied to nostalgia of games of yore. I desperately want to love Final Fantasy XIII. And while I don’t know how I’ll feel in the end, I can say that what I’m getting out of the game around the 10 hour mark is very, very different than a series loyalist would expect. But now that my expectations have shifted, I can enjoy it.

COMBAT’S WHERE IT’S AT:

The combat system really is the focus of FFXIII, just like the creators said. Now I get it. It’s a very dynamic, fast paced experience (well, for an RPG– It’s no FPS obviously) where rather than selecting individual spells, attacks and whatnot for each character, you instead select the role you want your team members to fulfill. Want a physical damage dealer and two healers? Check. Oh shit, now three seconds later (literally) you might want a mage, a buffer and a debuffer. Paradigm shift! 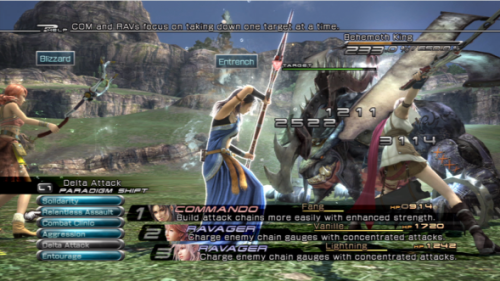 These roles all combine to form some cleverly named team assignments (DOUBLE DOSE! WAR & PEACE! RELENTLESS ASSAULT!), and you’ll shift these roles into team arrangements called paradigms constantly throughout battle. They shift very fluidly, and it does feel more like you’re directing the flow of the fight rather than nitpicking each and every turn based what-have-you. If that sounds easy, and like the game plays itself (it does for the first 2 hours or so), you’ve got the wrong idea.

So, onto Disc 2. Still can’t for the open-world exploration that I think I’ll hit in another 15 (oh my god, 15) hours. Or for Fang to finally join my party (hello alternative lifestyle haircut). But now that I’m enjoying the game, the story of Cocoon, Pulse and all this L’Cie nonsense is starting to make more sense now, after poring over the data logs for a little while. I could do with fewer cut scenes of Snow statutorily raping that irritating Serah girl (and her side ponytail– ew), but we’ll see what happens. If I put it down I may fall into the pits of moogle-less, overworld-less despair, so I’ll try to keep on truckin’. But hey, my characters are headed to a place called “Palumpolum”, so that probably can’t go wrong.