Welcome to the seventh recap of the first season of The L Word: Generation Q, brought to you by the same network that brought you The L Word, an intriguing television program about an aspiring filmmaker who moves in with two “real lesbians,” hangs hidden cameras all over their house without their consent, develops an erotic obsession with one roommate who eventually takes a lot of painkillers and starts a fight with random men on Venice Beach only to be rescued by the filmmaker, who is eventually revealed to have been sitting in his toolshed watching her have sex and engage in Love Confessions for the duration of his residency at their home, at which point he is told to move out, then asked to remain, and then vanishes into the ether, never to be heard from or spoken of again.

It’s official: I’m really into this show now. I’m stoked for its renewal (Marja please hire me to write a Christmas episode) and somehow I have become invested in one specific ‘ship to a degree that I have never before experienced, despite being a grown woman who has written professionally about television for over a decade!!! W h a t  i s  h a p p e n i n g. This recap feels unhinged but also…. so do I.

We open at DaSoMi’s on, once again — bless us, everybody — Sophie’s naked body. She’s soaping up with the vigor and commitment of a woman in a Nivea Body Wash commercial, to the sweet dulcet tones of Victoria Monet’s “Ass Like That.”

Smooth. Like you’ve never felt before. Touch of smoothness body wash. Provides moisture throughout the day with no greasy feel. For skin that’s irresistibly smooth. Lesbians: Touch and Be Touched.

Dani, a Very Busy and Important Interim Campaign Manager because Pierce Really Fucked Us When He Left, enters the lavatory in a flurry of Busy Importance while her very hot very naked girlfriend yearns for attention or even just a tiny nod to her very hot very nakedness. Sophie peers out, asks for a razor, presents a very kissable face. Dani doesn’t bite, which bites.

But you know who’s also living at DaSoMi’s right now and is VERY ready to acknowledge the incredible display of hotness happening so early in our XL Morning?

A full bush! I see it. And I respect it.

“So is this like a pilates situation?” Finley asks while power-squatting.

“Get out of here!” Sophie laughs more.

Meanwhile at The Thruple Towers; Alice, Nat and Gigi are basking in the resplendent glow of their ideal relationship scenario, one which enables the children to get packed lunches and Nat doing her makeup at home and Alice wearing cute little pajamas.

Noooo you drink the poison first! 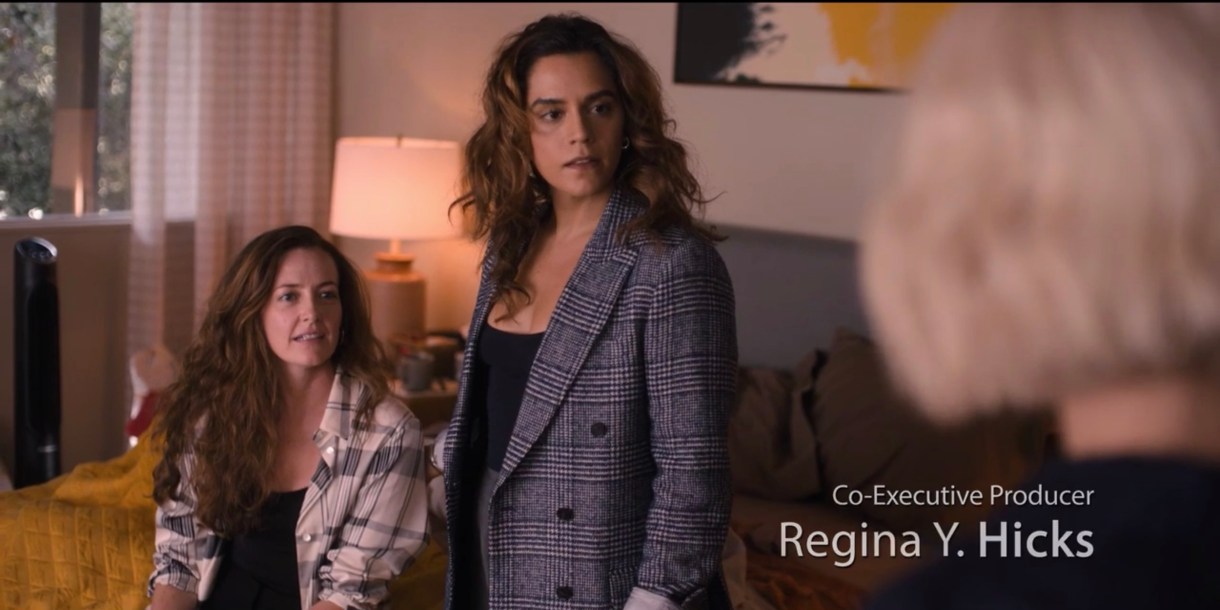 Wait — didn’t you have a arm tattoo before?

Our XL Morning keeps on chugging over at DaSoMi’s, where Sophie’s preparing a brunch spread to remember, Dani’s worried she double-booked Bette’s pancake breakfast with the first responders, and Micah’s Mom is in town and has already bought 34 gummies at the dispensary. 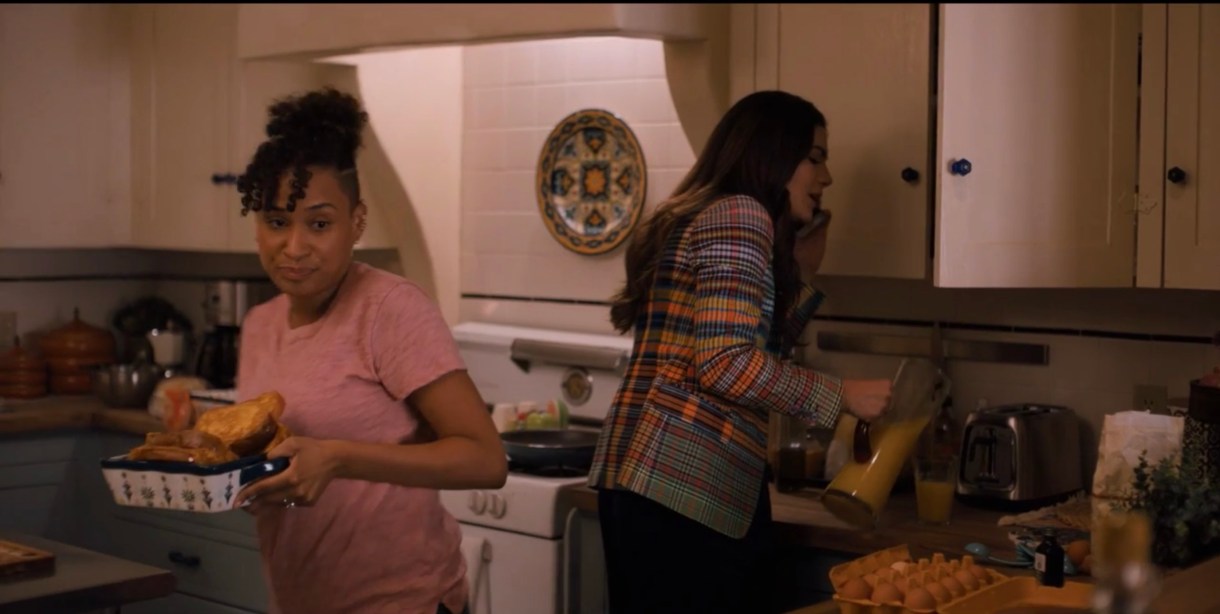 Gonna go bring this bucket of french toast to the only girl who noticed my ass this morning, I left some raw eggs out for you, bye

Finley The Traditional Lesbian When It Comes to Tools trots downstairs, registering a complaint about the water pressure and an offer to fix it if they have a wrench, just as Sophie gets a phone call from her Mom that shifts her mood real fast.

Finley and Micah and Dani look on as Sophie gets the news — her grandma fell and she’s in the hospital. What happened, says Micah. Is she okay, Dani asks. Are you okay, Finley asks. Dani offers to cancel her morning and accompany Sophie but Sophie says no, no, no. She’ll call if she needs anything. Before this difficult conversation can progress, Sophie opens the door and look who’s here it’s Micah’s stoner Mom!

I just got my aura photographed ON WEED

We then swoop on over to Kit + Denny’s Lesbian Roadhouse for a mid-morning meal with Tiny Tina. It appears Bette’s Farewell vice grip of sorrow successfully convinced her Terrific Tina to remain in Los Angeles for another episode.

Remember when the B-52’s played at The Planet and I missed it to spend the day on set “in Canada” with Fucking Josh Becker?

Just — I’m sorry, here, but!!! Just as a point of order, if I may? Although Bette did attend early ultrasounds for the baby Tina eventually miscarried, Tina likely heard Angie’s heartbeat for the first time alone, as Bette was unaware of Tina’s pregnancy for its first 3-4 months (there’s no time on The L Word and Laurel started the season pretty much ready to pop, so it’s hard to say specifically) — despite Tina being, you know, very visibly pregnant and actively cavorting around West Hollywood wearing Twin XL blankets as shirts to cover the human lifeform beating away in her belly — fetal heartbeat is detectable by vaginal ultrasound usually by the seventh week of pregnancy, and Tina probs had her first ultrasound around that time, because earlier ultrasounds are recommended for women who miscarry. We saw her at the OB/GYN, alone, discussing her pregnancy in Episode 201, which was probably when that was initially done. Bette’s first screening of “Angie: The Prequel” didn’t happen until episode 209 (Tina invites her to “her next sonogram” in episode 208), and, although as previously established, Bette was not present to hear Angie’s first heartbeat, she was also not sobbing at the first doctor’s appointment she did attend with preggers Tina, as illustrated in the below screencap: 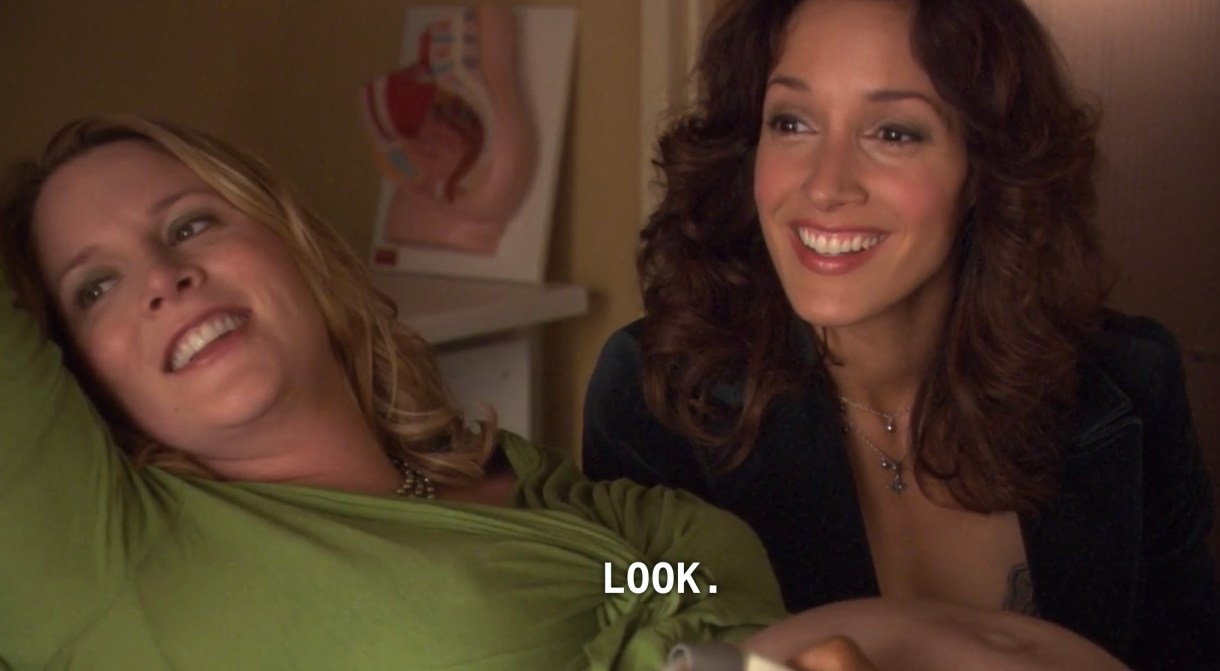 Not a wet eye in the house

Nevertheless, Shane buys this ENTIRE LIE and is now visibly nervous about her potential reaction to the heartbeat she’s scheduled to hear later that day. Thrilling material for Shane here. Tina asks Bette to have dinner with her that night, and Bette says she’ll cook, and Shane looks at them like “here we go again!” It’s also established that Tina’s taking Angie to a museum and then to Jordi’s, where they might scissor and might not but don’t talk to Bette about it, she’s not ready to explain scissoring to anybody, let alone her own spawn.

She follows everyone, doesn’t she

Carrie calls and Tina dips out. “You look a little flushed,” Shane notices re: Bette’s face. It’s not Tina, it’s menopause! But I think we all understand the confusion.

Cut to the hospital, where Sophie’s holding it down for her very emotional Mom and sister, relaying cold hard medical facts, determined hope, and an offer to get them some food and coffee.

Sophie steps out and immediately collapses into long-held tears. But guess who’s here?!!?!

Earlier that XL Morning when Sophie told Dani not to come she told Finley not to come, too, but Finley came, ’cause she knew better. Finley sees her sadness, puts down the snack-pack she put together for her best bud, and brings her in for a hug — giving Sophie, essentially, the exact method and delivery of emotional and physical support she presently requires. Sophie cries and Finley says “it’s okay, it’s okay” and then Sophie just folds right into her.

At the cafe, Dani relays a hot tip from her buddy at CBS: Milner’s priming some attack ads to launch upon Bette Porter for Mayor 2020, and maybe just maybe Bette should consider returning his bloodlust with a little rough play of her own? Nope, Bette wants to stick to her playbook: being hot, giving good speeches when angry, having nice hair, yelling choice words at men, loving art and “voter outreach.”

Just, consider asking this butch barista if she’s interested in a recurring role in Season 2. Just consider it!

“As your acting campaign manager,” Dani begins, continuing to beg Bette to let her make an attack ad! I hope they found out that Jeff Milner’s horse was actually named Ann Coulter. Dani needs Bette to let her do her job! Bette says no again, which probably is making Dani wonder, am I a bottom after all?

Ah, at the Building of Medical Procedures, Shane’s playing with a plastic model of a vagina / uterus / et al and Quiara’s prepping for a look at her little lima bean!

I think THIS is the part where I put my tongue first…. but I’m not positive…

As expected, Quiara feels immediate maternal emotion upon hearing the heartbeat. Shane, meanwhile, is so concerned about having the wrong emotional response that she’s just shut down for business altogether. Instead, Shane repeats ye olde adage, “it sounds like horses stampeeding through the mud.”

He just said our baby is an alien from outer space sent to earth to destroy mankind, are you SURE you wanna keep it?

Cut to The Aloce Show where the mid-morning meeting Alice has to miss dinner for is revving up — don’t worry, Drew’s totally there, he wouldn’t miss it! Alice explains how proud she is of her Morning/Night Coffee Talk Show and their unconventional guest choices and how maybe, going forward, it’d be cool to have less voices in the room?

Thruple. It’s a couple plus one?

But the network isn’t interested in kicking Drew out of the writers room because they’re not sure there’ll be a show and a writer’s room to kick Drew out of! Alice is on The Bubble. Ratings are low, despite the fact that she got Megan Rapinoe to disclose hot lesbian sports makeouts in the locker room on live television??!?!

How else can I put this? There are three of us. Together. Three women. One relationship.

To save Alice’s show, the network just needs a few viral videos — shortform, catchy content — which luckily is Drew’s specialty! Alice dies inside.