Hello and welcome to another edition of Autostraddle’s College Lesbianage: a glimpse of college life through the wide eyes of six freshly fallen snowflake first-year queers. This month’s update will be given individually! Today we’ve got Bryn Mawr’s Kelsey with some thoughts on her summer internship.

I never imagined it would be so easy to get lost at the UN. I’ve been interning at the Unitarian Universalist United Nations Office (UU-UNO) for over a month and, to date, I’ve asked a security guard where the North Lawn Building is while standing right in front of it, used the visitor’s entrance to the visitor center instead of the staff entrance, and wandered around the basement of the Conference Building desperately hoping to find a doorway to the outside world. One amazing benefit of interning at an NGO affiliated with the UN is that I get a pass to UN headquarters, allowing me to attend meetings and wander around without a tour guide. The only downside is that hanging my pass around my neck makes people assume I know where I’m going and what I’m doing. 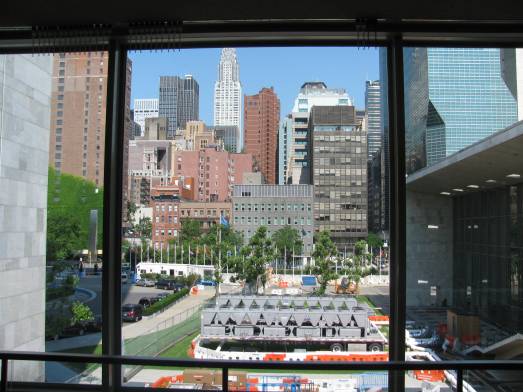 A view of NYC from inside the UN. The UU-UNO is located on the 7th floor of the brown building toward the right.

While I attend meetings at the UN at least once a week to take notes and represent the UU-UNO, most of my internship takes place in a small, two-room office across the street. The UU-UNO, which has its headquarters in the UN Church Center, is an NGO representing the Unitarian Universalist faith at the United Nations. My work there is divided between helping with office tasks — making phone calls, posting on social media, writing and editing office publications — and working on my own project within the office’s LGBTQ initiative. I am currently doing research about gender confirmation surgery in Iran, in hopes of organizing a film screening and panel discussion about it. The UU-UNO has played a major role in advocating for LGBTQ issues at the UN and it’s exciting to be a part of that, even in a small way. It’s also great to get a glimpse of what my life could be if, as I’m currently planning, I go into social justice/activism work after graduation.

When I started at Bryn Mawr, I thought that I wanted to major in English/creative writing or physics and go to graduate school, but I had no idea what to do with my life after I finished formal education. I can’t pinpoint the exact time when I changed my mind but, gradually, in the months of feminist discussions and learning about neoliberalism, I did. I’ve decided to major in sociology and probably go to graduate school at some point; I’ll do social justice work after graduation instead. I believe in education for the sake of education, not just for getting a job and making money and following the expected trajectory of life, but at Bryn Mawr, for the first time, I developed a vision of my life beyond accumulating knowledge. So I chose to spend my summer in a two-room office, trying to see how people change the world once their degrees are done. It’s not particularly glamorous — a lot of time is spent answering e-mails and waiting for people to respond — and it’s hard to see change happening when you’re one of the people trying to create it. But hindsight is a powerful tool and I can look back on all the UU-UNO has done and believe that I’m doing a little bit to keep that progress going. 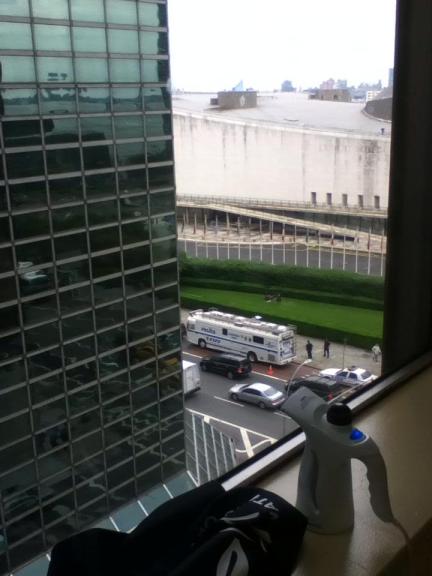 The view of the UN from my office. I tried to iron a flag for an event on that windowsill — it didn’t work so well.

When I’m not at work, my summer is nice but pretty low-key. I hang out with high school friends, Skype with college friends, enjoy time with my family that I value more now that I don’t get as much of it. I’m teaching myself “Mr. Jones” on the ukulele, reading some Neil Gaiman books, watching Switched at Birth and The Fosters because they bring up issues that my sociologically-oriented mind finds fascinating. I’m also trying to take advantage of the time I have in NYC because, even though I’ve lived 90 minutes away for 16 years of my life and have been to the city many times, there’s still a lot I haven’t seen. My parents and I went to a taping of The Daily Show, I wandered around the Schwarzman Building of the New York Public Library and I’m planning to check out the Morgan Museum. I can’t wait to go back to Bryn Mawr, but I’m trying to make the most of these months away and, so far, I think I’m doing pretty well. 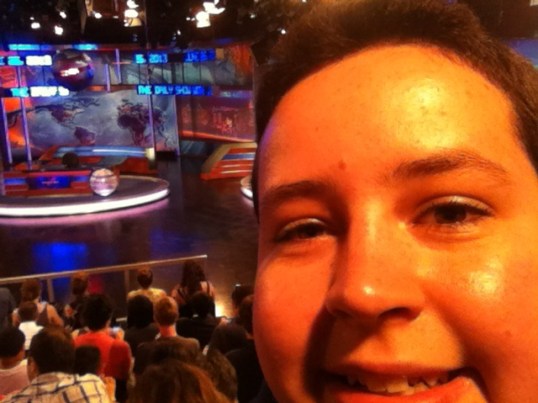 Me at The Daily Show taping. It’s hard to take a good selfie when you’re not allowed to stand up.

Kelsey has written 2 articles for us.