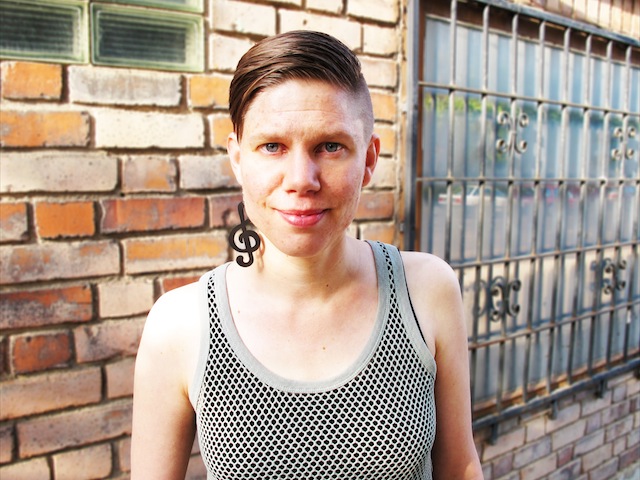 Karin Agatonne is a Swedish solo artist who, after spending years playing the guitar, basson, Indian sitar and dabbling in various genres of music, decided that guitar-based, folk-inspired songwriting would be her main jam.

Karin’s been active on the Stockholm music scene these past few years, first as the guitarist for the indie folk rock band The Goner, which released two singles in early 2012. She then took her solo songs to the stage, playing a string of live shows with singer-songwriter Astor Wolfe including the opening ceremony of the Norrköping Pride Festival. Just recently, Karin released a solo EP called All the Girls. You can hear and download the title track via the player below.

I like to think of myself pretty much as a classic folk singer/singer-songwriter with a guitar and some sort of story to tell.

The title track of my new EP, “All the Girls.” It’s also free to download.

On of my favorite things to do is to watch roller derby. Here in Stockholm we have Stockholm Roller Derby which is one of the top teams in Europe, so it’s always a pleasure to see them play. I really like the culture that comes with the sport as well.

I remember me and my brother getting the 7″ vinyl single with Twisted Sister’s “We’re Not Gonna Take It”, back in 1984. I loved it! The last record I bought was Mary Gauthier’s Live at Blue Rock. I picked it up when she played in Stockholm in April 2013 so it’s a lovely signed copy.

I really love meeting a lot of new people and to play for different audiences in different environments. To me it’s all pretty new and exciting so far and I don’t really have anything negative to say about it yet. I have only been playing live for about half a year so I guess I’m still in the honeymoon phase.

You know, I decided a long time ago that I wouldn’t have anything like that. Music is very important to me so I don’t want to put any boundaries on it. If I feel like listening to the world’s most corny pop song – then I’ll do it. To me music is about feeling, so any music that you feel like listening to is the right music for that time, I guess.

Piece of cake: Mary Gauthier as well as Karen Mould (Bitch), who has a new project called BEACH.

Where do you write your songs?

I usually write my songs in the comfort of my own home. I think the best time to write is around midnight, but, I never pick up my guitar with the intention to write a song. That creative moment is something that just happens for me, it can’t be planned or forced.

What’s the best piece of advice you’ve ever received?

Well, it’s not so much a piece of advice as a change in attitude. I learned, from my musician friends, to go out and do my thing without being completely terrified of how the audience might react. A little bit like “well, if they don’t like it that’s not my problem. I sing because I want to and they can listen if they want to.”

Keep an eye out for Karin at various Swedish Pride festivals over spring and summer. You can keep up to date with her latest news via her website, Facebook and Twitter, and listen to more tracks via Soundcloud.