Sapphic.  \’sa-fik\.  A lovely, aching word, half sigh and half cry. Describes a certain type of poetic meter, a four-line strophe made of trochees (start out strong, get hesitant – “benediction” is a pair of trochees) and dactyls (“heart attack” is a dactyl if you say it right).  Or describes a certain type of woman, the kind who reads Sappho and relates enough to blush.  Sappho left behind only four complete or near-complete poems (plus a sky’s worth of starry, evocative fragments), but she lent her name, and the name of her hometown, Lesbos, to an entire group of people, a group that didn’t really come into its own until several millennia after her death.  She certainly didn’t mean to name us; arguments as to whether or not the terms make any sense are persuasive on both sides.  But that’s how language works a lot of the time – something seems to fit, and it sticks, and later evidence doesn’t necessarily budge it. “Sapphic” stuck for important reasons, even if they’re not the obvious ones.

I first met Sappho in Latin class my junior year of high school.  At that point I didn’t know what the heck I was, and certainly had no word for it.  You couldn’t even call me closeted, as that implies four distinct walls to lean or to hammer on, and some awareness of relative darkness by way of a crack of light under the door.  No, I was way down under the house, getting ready to follow the banging of the pipes up through a trap door and then into the closet.  Meanwhile, I was wearing the exact same track jacket every day, staying out of potentially dicey cafeteria conversations, and writing a whole lot of poems about my best friend, especially in Latin class.

A fragment of Sappho’s on mummified papyrus.

My desk in that class was stage right, three rows from the front.  A few times per class I’d get a stack of papers, take one, pass the rest backwards over my shoulder, and set to translating.  This time, though, there was no Latin.  Only squat Greek letters, English lines paired up with them, and a little bio-in-a-box about Sappho, which I skimmed – 7th century, Plato’s “tenth muse,” wrote wedding music.  Influential female poet, cool.  I dove right into the English translation, and woah.  Sometimes it feels like I still haven’t come up for air.

It was Poem 31, the oft-translated, always beautiful Poem of Jealousy.  My thought process while reading was something like this: “He seems to me to be equal to the gods, that man/who is able to sit beside you . . . hang on, this is a woman?  A woman writing about being jealous of a man who is hanging out near a different woman?  Listening to your sweet voice and gentle laughter . . . Boy, did it just get oddly warm in here?  Does my teacher know or something?  She must know.”  But most of the fear was quickly leached out in favor of the thrill of discovery.  Here, finally, was a woman from long ago and far away who felt like me, who wrote about what I wanted to write about without apologizing or changing pronouns, but still managed to convey wistfulness, and terrible passion, and an anger at being somehow positioned wrong.  “I am paler than grass.”  Not only can I still hear Poem 31 in my head, I can still feel it in my fingers, which scratched the last, half-lost lines into all kinds of margins over and over again, whenever I felt frustrated: “But all this must be endured, since . . .” 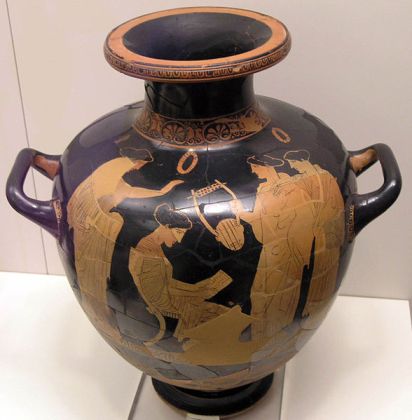 Sappho reads to her friends, on a vase.

So that’s my own personal Legend of Sappho: all my high school feelings projected onto a boxed biography and a photocopied image, but I was pretty late to the symposium. In fact, Sappho is one of those world-changers who’s now more figure than fact; an outline casting a large, flickering shadow. Throughout history, people have written and rewritten her story to suit the times and their own needs; she’s been a muse, an archetype, a pariah, and a role model, this despite the fact that no one really knows anything about her.

The little we do know for sure comes from the Suda or Suidas, a massive Byzantine Greek encyclopedia and lexicon from around the end of the tenth century.  It tells us that Sappho was born in the 7th century B.C., on the island of Lesbos, to an upper-class couple named Scamandronymus and Cleis (Sappho and her hometown, of course, also indirectly brought us the word “lesbian,” but that’s an article for another day). She lived there with her parents and three brothers, wrote poetry, and was briefly exiled to Sicily because of political strife. When she got back, she married a wealthy man named Cercylas, and had a daughter, who she named Cleis, after her mother. Her day job was running a thiasos, an academy where unmarried young women would go to learn social graces, composition, singing, and poetry recitation. 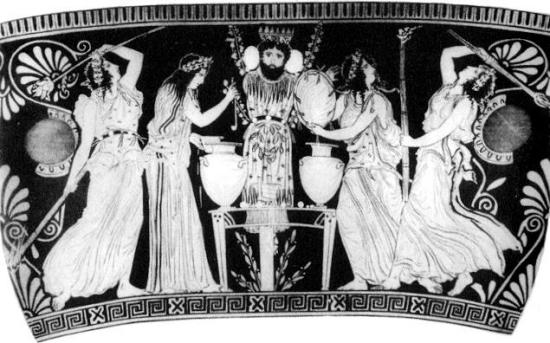 She was a very good poet and a very good thiasos-runner, and during her time, this brought her a lot of respect (“everybody honors the wise . . . and the Mytilineans honored Sappho although she was a woman,” explains Aristotle). Afterwards, though, when times and social mores changed, it garnered her a different kind of reputation. Athenian playwrights and satirists around 400-300 B.C. began “using Sappho as an easy target for jokes about lesbianism and promiscuity.”  As H.T. Wharton put it in his 19th century biography of Sappho, “she became a sort of stock character of . . . licentious drama.” In 380 A.D.E., Archbishop Gregory Nazienzen of Constantinople ordered her works burned; Pope Gregory VII did the same in 1073. Books were hard to come by anyway in those days, and these two purges effectively got rid of any copies of Sappho’s complete works. As with so much of history once considered deviant, we were left only with fragments. 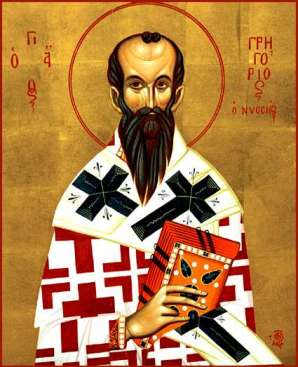 The first of these fragments were rediscovered during the Renaissance, hiding in ancient Greek textbooks as examples of great poetry of the age and of Sappho’s particular regional dialect.  Renaissance-era scholars and writers, with their insatiable appetite for truth and beauty, ate Sappho up.  Women in particular were glad to have discovered her – she was, according to historian Harriette Andreadis, “the sole ancient model to whom early-modern women writers might compare themselves and to whom they might be compared.”  Madeline de Scudéry, a 17th-century French bluestocking who owned a feminist salon, “presented herself as a second Sappho,” used her heroine’s name as a pseudonym, and even wrote the first biography of Sappho.  British writer Katherine Philips, who often poetically exalted female friendship, was also held up next to Sappho, “often with a disclaimer about her sexuality.” After she broke the ice, many other English women writers began trading the compliment, increasingly disclaimer-free.

Meanwhile, an entirely different group of people had happened upon Sappho’s many-layered reputation and found parts of it useful. Sixteenth and 17th-century European biologists were starting to seriously try to understand the female sexual anatomy and everything it was capable of. Thomas Bartholin, in an English translation of his father Caspar Bartholin’s anatomy book, pretty much credits Sappho for inventing scissoring, which the Brits called “tribadism.” After that, she was the go-to reference for this “lascivious Practice.” 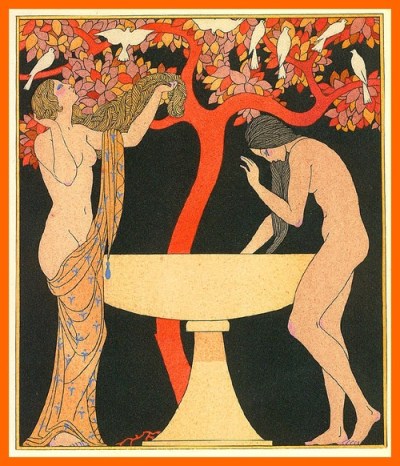 In the late 19th century, archaeologists southwest of Cairo discovered some lost manuscripts of Sappho “written on papyrus rolls and used as lining in mummies and wadded into the carcasses of crocodiles and other sacred animals.” This sparked a resurgence of interest in her poetry and her persona, which was particularly attractive to a French literary community that was currently embracing envelope-pushers like Charles Baudelaire and Paul-Marie Vermaine.  Pierre Louys, erotic poet and nude photographer extraordinaire, capitalized on this new popularity with a book called Songs of Bitilis, which contained “passionate love poems between two women, supposedly written by a contemporary of Sappho” — he added all the explicitness he thought Sappho’s poems were missing and bolstered his trick with a fake bibliography, and it sold like hotcakes. As historian Neil Miller puts it, “Soon, women who shared Sappho’s sexuality discovered her as well, and, like the model for contemporary male homosexuality that British gay pioneers . . . sought in classical Greece, Sappho became a focus for a new, affirming sense of lesbian identity.” Sappho was a celebrity again, and the word “sapphic,” in its contemporary sense, was finally born.

I say contemporary, but no one really uses the word “sapphic” anymore. I understand why – it has an air of exoticization about it, and its roots, which seem at first glance so straightforward, are pretty twisted when you trace them back. The best-known legend about Sappho has her pining so hard for a man she throws herself off a cliff, which tangles the common modern connotation of “sapphic” to mean “lesbian” and not more broadly women’s attraction to other women. Honestly, though, I like how gnarled the word is, that its meaning isn’t stable. I like that it, like the rest of our history, traveled through ridicule, censorship, misrepresentation, medicalization, sensationalism, and crocodile carcasses, and still, through the purity of the poetry itself and the ideas behind it, remains literary, unsullied, and achingly relatable. Sappho’s most famous couplet goes like this:

you may forget but let me tell you this: someone in some future time will think of us.

The world has forgotten Sappho countless times, and remembered her again in whatever way it sees fit. And if we, here in some future time, think of her, and need her to be something, I like to believe she wouldn’t mind. Call it poetic license, but maybe we can finish up her fragments for her.