Why hello there Technoreaders! How are you doing on this fine day? How would you like if I put Techno as a prefix before everything I technosaid? I’m not sure if you would likestraddle it at all.

Today is a special day. Because I know you’ve been dying of curiosity. You may not have even known it! But I assure you- you were curious. And dying of it- I could just tell. Today I’ve come here to to set the facts straight about us. And by us I mean Technostraddle. Or maybe geeks. Or maybe just me? Anyway, here’s a little something I’d like to call the Geekender! Think of it as a kind of Technostraddle ‘dear diary’ entry– just envision the swirling cursive and the tiny doodles in the margin of the pages! It’s just like that! Or like a blog- it’s like a blog too.

In today’s Geekender I’d like to quell any persisting rumors about my high-profile and certainly glitzy life. As your trusty geek in residence, I live a life of glamour, to be sure: I may not own a Bedazzler, but that doesn’t mean I haven’t thought about buying one.

In fact, my oh-so-decadent geek lifestyle is pretty much identical to that of your usual celezbian or otherwise downward-spiraling pop-culture icon. Sure, there are a few key differences. I may not throw lust-ridden parties with hot tubs and casual sex, but I do throw LAN parties. And while the papparazzi has yet to properly take note of my high-profile superglamimportance, I try to fill in the gaps in publicity with Photobooth coverage. Beyond that, we geeks inhale our drugs off the covers of neon green Xbox 360 cases rather than mirrors. All of this is minutiae, really. 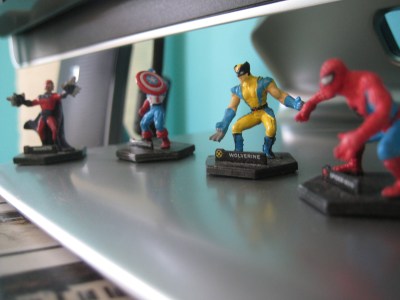 accoutrements of the geek and famous

So here’s the inside scoop- where you’ll get a tiny and lazily photoblogged look into what I’ve been up to! When I’m not doing super amazing totally classified really glamorous stuff, I’m usually being a nerd. Most of my free time is (surprise!) spent doing some pretty geeky stuff. I’m not frontin’. I’m not even cool enough to really know what that means.

So here I’ll let you now what I’ve been up to…what games I’ve been playing, what I’ve been reading (hint: the books usually have pictures) and probably lots more entirely fascinating Technostraddly things that neither of us can even conceive of! Because they haven’t happened yet and my current superpower repertoire does not feature clairvoyance. Though it does feature “drinking beers.” Maybe these fascinations will be photoblogged! Maybe they’ll be cartoons I draw! You decide! Make demands! Be heard!

And now to recap my Geekend! Which is like a weekend in most ways. All ways, really. Last weekend was my birthday, a perfectly shameless time of the year for me to dive head-long into a deeply satisfying materialistic phase. But more importantly my birthday meant I could do whatever I wanted without anyone telling me I was a loser. Which is really all a girl can ask for. Right? So, with these powers combined, I went to buy some comics, naturally!

Here’s a sneak-peek into a little adventure to my favorite local comic book store! This place is pretty new, and while it lacks the kind of musty, sexist ambiance of your usually comics hole in the wall, it replaces those questionable retail qualities with positive ones! 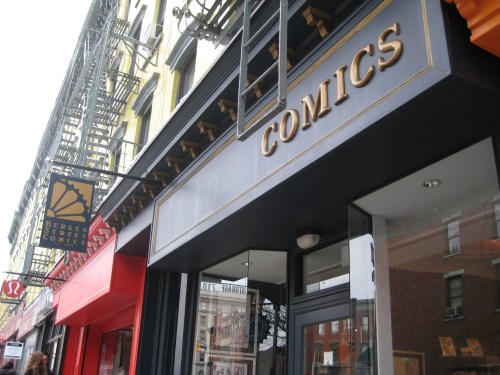 This store is absolutely lovely. The building is cute, even elegant, the interior boasts exposed brick and beautiful wood and the quaint little sign hanging ever-so-invitingly above the door makes me feel like this is some kind of immediately cozy and familiar setting, when in fact it’s not at all familiar (though it is cozy) because it’s truly the first of its kind that I’ve had the pleasure of running across.

That’s because Bergen Street Comics reflects the newfound maturity of the art form. As comics and graphic novels creep their way into mainstream culture, increasingly cropping up on best-of lists (like when Alison Bechdel’s Fun Home found itself named the 2006 best book of the year by Time Magazine!) and garnering positive critical reception, it’s only fitting that comic shops should evolve as well.

Perhaps this evolution heralds the dissolution of geek stigma altogether! Rejoice! Maybe soon we will all look back on the early days of the comic book with gentle reproach, as the line between the comic and the novel blurs on into obscurity. Much like our nation already looks back on the struggle for marriage equality and asks itself what were we thinking?Maybe I’m getting ahead of myself. 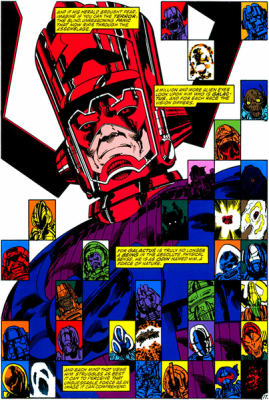 It’s great to have a shopping environment that reflects my own respect for comics as an art form. Or rather where the legitimacy of the art form just plain isn’t called into question. If I go to a chain store, I get dirty looks from people pretending to browse the Historical Non-Fiction section. If I go to a small run-of-the-mill retailer, I get weird looks from kids scooping up Hulk action figures with their parents.

Granted, it’s nice that I can find an increasing selection of comics at large retailers like Barnes and Noble. Sometimes they surprise me- the other day I even came across Jaime Hernandez’s Locas on the shelf and I wondered why I paid for the Amazon shipping a few years ago (it weighs about 10 lbs and has plagued me every time I’ve moved apartments).

And I’ll still pop into my shabby little go-to comics stores when need be. One in particular because I inexplicably like to see this crazy ex-con guy who sports not only a Green Lantern tattoo but also a Galactus tattoo (who gets a Galactus tattoo?!). There’s a certain unrefined charm in these kind of stores too, certainly.

Granted, some aspects of my love for comics will never cease to be guilty pleasures. I know that I can only expect to find so much artistry in a whatever crossover issue features Wolverine this week. But hey, I like Wolverine. And I’ll just slip it between two Alan Moore books when I’m checking out. No one has to know.

But a grown up comics store where I can feel at home and not as though I’m indulging in some kind of guilty pleasure? I’m sold. So thank you Bergen Street Comics, for epitomizing the very bright future of the comic book. I wish everyone had a lovely little place like this in their town. Maybe y’all should just come visit?

And without further ado, Here’s a rundown of what I bought! I‘ll let you know how I liked it…

I’ve needed to catch up on the Gay Batwoman Phenom for some time now, so I picked up issues #855-860. Also got Rucka’s Whiteout. I love Greg Rucka- he can do no wrong (I hope!). I’ve wanted the trades of Morrison and Quitely’s brilliant All Star Superman for a while, so I grabbed those too. And after finding myself really intrigued by Issue #1 of King City, I picked up the rest of it that I could find. Beyond that I bought issue #1 of Joe the Barbarian, which I know nothing about, but I’ll usually buy most anything Grant Morrison writes. Now to finish reading everything! 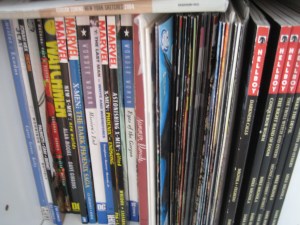 a tiny glimpse at my comics bookshelf! 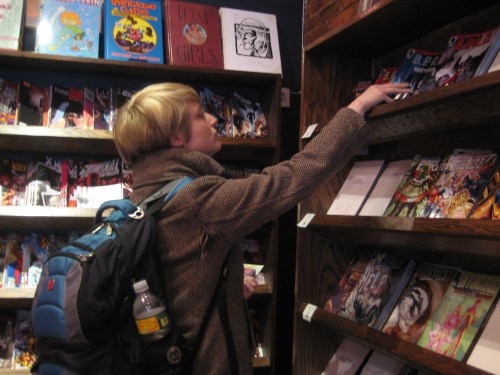 While losers may wear backpacks, winners buy comics! So I broke even. 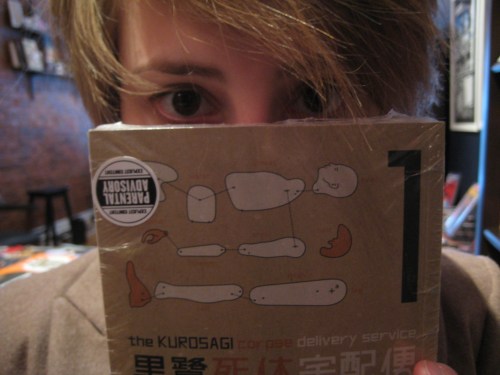 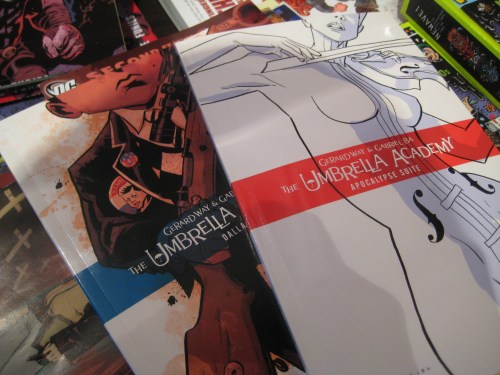 I still need to read this! It looks really interesting.

PRIOR TO THEIR IMPENDING CEASE & DESIST ORDER! 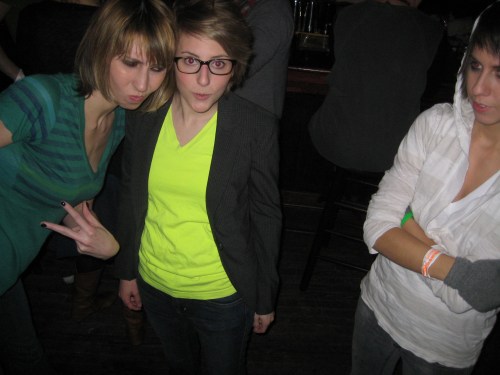 Riese reps her obscure gang affiliation! Kelsey seems unconcerned. Alex is too cool and has to go to a better party now. 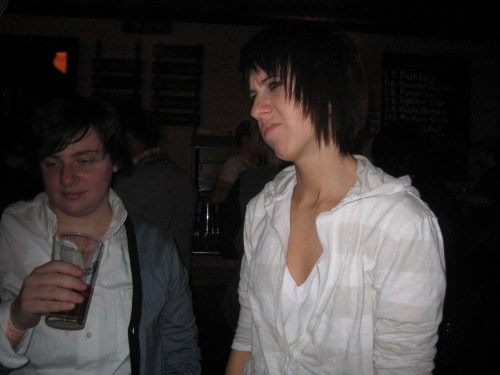 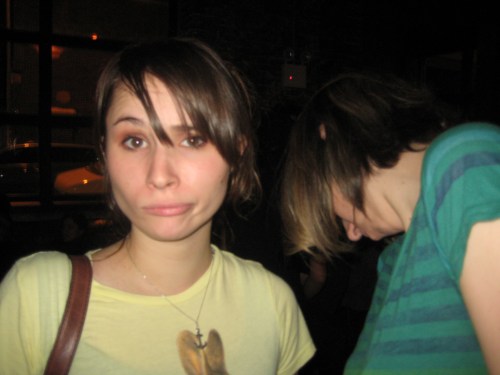 Miss Feb makes a scrunchy face too! Riese makes the absence of a face. 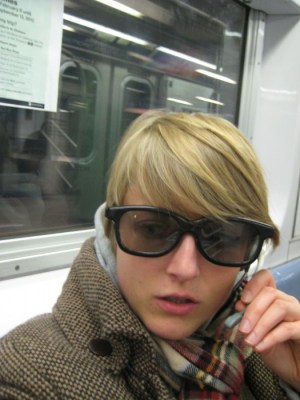 As if there was any doubt in your mind that I still wear my Avatar glasses in public. Please don't stop reading Technostraddle. 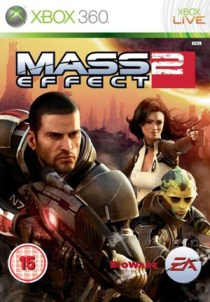 This weekend, I started Mass Effect 2 after happily graduating from Bioshock 2 last week. And by “started Mass Effect 2,” I mean I made a hot female Shepard and can’t stop compulsively making sexual innuendoes so that I can get in her virtual pants. I think I may be missing the point of Mass Effect 2 so far. But hell, noone told me that while you may not be able to lesbo-bed Kelly as a female Shepard (the stoic protagonist), you can a) hit on her relentlessly b) invite her to your quarters and c) get her to perform a strip tease! And actually you can bed her in the sense that she and Shepard, after enjoying a fine dinner and a fine strip tease, will LIE ON THE BED TOUCHING EACH OTHER. WHAT!

I’m so glad I looked this up so I can obsessively make all of the right dialogue choices to lead to this, the utmost of Mass Effect 2 events. It’s like choose your own gayventure! Of course, as my thorough seduction of every female human, alien and vaguely sentient thing in this game continues, I’ll keep you updated about what I think. And if my Shepard gets laid (cross your fingers)!