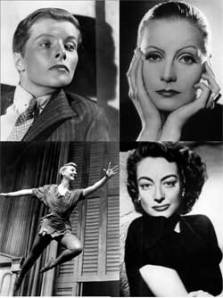 CELESBIANS:
In Hollywood Celesbians: Then and Now, Winnie McCroy at The Edge traces the storied history of Hollywood’s homosexuals, from the era of Lavender Marriages to now, when “the proliferation of blind items, crotch shots, and anything-goes catfights among alleged Hollywood lesbians found on Internet gossip sites may leave some longing for the Golden Age of Hollywood-a simpler time when stars kept their dirty laundry hidden, and only studio insiders knew who was gay and who wasn’t.”

Furthermore, pre-Stonewall, coming out wasn’t a viable option for ANYONE, let alone famous people. The so-called Sapphic “Sewing Circle” of early Hollywood included big names like Tallulah Bankhead, Joan Crawford, Greta Garbo, Barbara Stanwyck, Isadora Duncan, Mercedes de Acosta and Marlene Dietrich, many of whom maintained serious lesbian lives away from the public  eye. (Recommended reading on this topic: The Sewing Circle: Hollywood’s Greatest Secret – Female Stars Who Loved Other Women — it’s not the best-written book ever but the information in it is seriously FASCINATING). 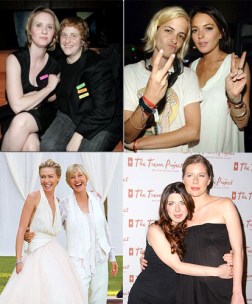 “While these women operated under the radar due to their exotic demeanor and a generally sultry image, others did so with the help of studio executives. Some, like Jean Arthur, managed to keep their female lovers secret by dating unknown women and living on the California coast, outside of the Hollywood scene and pursuant gossip. Other lesbian couples managed to skirt media scrutiny by being seen publicly with male couples, and letting the public come to their own conclusions about who was with who.”

In addition to increased media scrutiny, gay stars today are now encouraged to come out to make a social statement:

“… while there may be more stars today offering more access to their lives, one thing has not changed over the years; the fact that Americans look to their favorite celebrities to lead the charge on important social issues. Although it is generally accepted that rising celebrities may keep their orientation secret until they make it, many in the gay community heap scorn on established celebrities who are consistently linked with same-sex partners, yet refuse to make a public declaration of their orientation in a time when we are stridently seeking civil rights.”

Yet the article points out that despite this, many lesbian stars still prefer to stay in the closet. They quote Gawker’s Brian Moylan, speaking of Queen Latifah, who says, “Some of it is good old-fashioned cowardice, some of it is stars saying they won’t have a career if they come out, and some people just want to keep their private life private. This is ridiculous! You are famous! People talk about you! Sorry Queen Latifah, we’re going to keep talking about you fucking your trainer, and if you don’t like it, then don’t be famous!”

McCroy fingerpoints Jodie Foster and Tom Cruise as well as Queen Latifah. But that’s just the tip of the iceberg — there are heaps of other confirmed homos who will likely remain closeted for the duration of their careers. And even today, it’s really not that difficult to do. 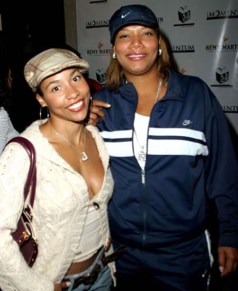 Recently at dinner with my girlfriend and a bunch of older straight people, the name of a popular male actor came up and we remarked off-handedly that he’s gay, ’cause I think it’s funny to yell “HOMO” in a deep voice the middle of a dinner conversation. See, we live in a bubble where this man’s homosexuality is more or less common knowledge & an accepted truth — similarly to how we spoke of Lance Bass, Clay Aiken and Lindsay Lohan before they “officially” came out. Much to our surprise, that offhand comment was met with intense resistance rather than blithe agreement: How do you know that? Why do you think everyone is gay? Do you have proof? Just rumors? Where do rumors come from? It’s just gossip? Who told you?

And there’s the rub, kids: although it can be known within the Pink Mafia and their extended circle of friends, the rest of the world really doesn’t believe us. Why is it so easy for celebs to stay in the closet? Because as much weight as gossip mags are rumored to have, those outside of gay circles are resistant to believing their favorite actors & actresses are gay without “proof,” and homo-sources are discredited for “thinking everyone is gay.” We listen to straights give us the litany of reasons why not — “but he’s married!” “but they have kids!” — and it’s clear that all the closeting techniques employed by these queer superstars are, without a doubt, working.

The gay press in-the-know is encouraged to participate in the closeting game, ’cause outing celebs is:

1) A huge faus-paux, a la Perez Hilton, unless said closeted person is actively crusading against gay rights. And this is totally fair, because it is rude to out people.

2) Outing makes those-in-the-know sound like bitchy cooler-than-thou asshats, “Oh we know all this stuff because we KNOW people who KNOW people, you know, ’cause we’re the COOL KIDS.”

3) At the highest level, you risk major lawsuits, espesh from stars who are using the lawsuit-happy Church of Scientology to protect them.

But we have this theory that most rumors turn out to be true. Do you think celebs have a responsibility to come out? And is it really social justice that inspires fans to clamor for their female crush object reveal her homosexuality? 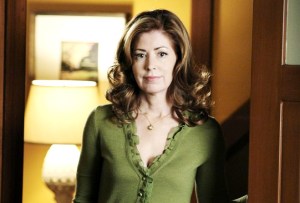 Desperate Houswives’ lesbian sub-plot debuted last night starring the Senator from The L Word (Dana Delany) as straight-so-far Katherine and Julie Benz as ex-exotic dancer lesbian “Robin.” The best part of the show was not actually the lesbian kiss, which was lame and passionless, but knowing the whole time that “Robin” (gayest name EVER) was a lesbo and no one else suspected it. Though last night was the first time we watched Housewives, our educated gaydars ensured an hour of suspenseful entertainent. Like when Lois from Lois & Clark: The New Adventures of Superman thought Robin was trying to steal her boyfriend, and you could be like, “she’s a lesbian, fool!”

Here’s the lesbian part, lest you be subjected to an entire hour of soapy melodrama when Ice Dancing is on:

Apparently Katherine has just been released from the mental hospital, which’s perfect ’cause lesbians love crazy girls! Although speaking from personal experience, I hope Katherine doesn’t land back in the hospital, ’cause those nurses hover like flies during visiting hours and it’s very hard to maintain a solid girl-on-girl action schedule under such conditions. 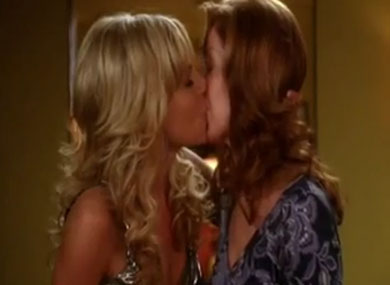 TILA TEQULA:
Tila Tequila had a “show” in Australia and she sang “Like a Virgin.” She posted the video on her website along with another crazypants blog, which she signs “Ms (soon to be Mrs) Tequila.” That’s right, her and Rum Punch are shacking up.

LINDSAY LOHAN:
Lohan speaks to The Sun about her “booze & drugs hell,” her arrests for drunk driving and cocaine, and how she knows her limits now:

“There are certain situations where I have obligations. There’s no reason to (drink) because I don’t want to feel like s*** in the morning… The thing is, at the times I was going out a lot and being seen everywhere, I would have been in college. My brother, who is 18, and his friends go out to bars and stuff till whatever time. That’s what you do in college. Mine was all in the public eye so it was magnified that much more. I’ve now learned my boundaries and I’ve been very good with cleaning house with people who I know didn’t have my best intentions at heart. A lot of people in LA are very self destructive.”

TAYLOR SWIFT:
Inspired by Autostraddle’s article on Taylor Swift, YouTube user madinthemoon recorded her own version of Fifteen and it’s totally amazing. Mostly the part where she can’t go to the dance because she wears glasses.

Stef: does riese know about this?
Alex: OMG we JUST watched it!
Stef: OMG
Alex: omg.
Stef: taylor swift is going to write a song about how riese was mean to her
Alex: Riese is SO SCARED cause she’s gonna get yelled at all over again.
Stef: oh yeah she’s doomed.