Life Is Strange, an Apocalyptic Teenage Feelings Adventure Video Game, released its first of five episodes in January of 2015, and I have been yelling at everybody I know to play it ever since then. The problem, though, is that most of the people I know are professional adults who don’t have video game consoles and whose computers are Macs, and Life Is Strange was available on every platform except Mac, and it was all a giant mess. But on June 16th, Life Is Strange finally landed in the Apple app store, so: time to keep yelling!

The basic premise is: You are Max Caulfield, an 18-year-old photography nerd of a girl who has just moved back from Seattle to your hometown, Arcadia Bay, Oregon, for your senior year of high school. The game begins with you waking up from a nightmare in class. For some reason you deal with that by taking a picture of a butterfly on a bucket, then a fight breaks out, and then you gain time-control powers. And also the world is maybe ending, and also your childhood best friend Chloe got super dreamy while you were away. Tale as old as time.

That’s all I can say without getting into the story, and the story is really the whole point. So here’s what I can tell you, and ten reasons you should absolutely play it if you haven’t yet.

1. This is a great entry-level game. 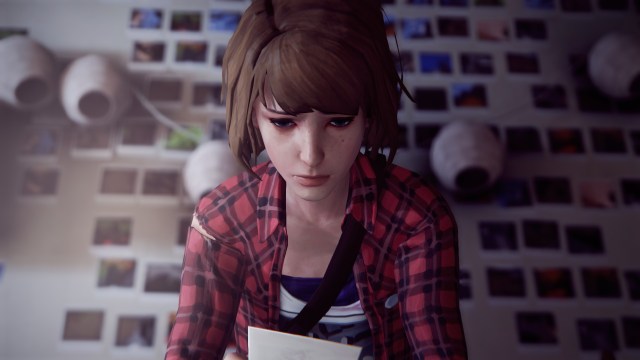 Even if you never play video games, or if you haven’t played since Super Nintendo or whatever was the thing when you were in 6th grade, there’s almost no learning curve here. It lets you play at your own pace, and the time-control mechanic means that if anything does catch you off guard, you can usually get a do-over if you want one. There are no zombies to shoot. The game world is easier to navigate than most websites, and it usually tells you where to go and what to do. At its heart, Life Is Strange is really an interactive story more than a game. All you really need to know is: click on everything and talk to everybody. And be nice to Kate Marsh, please.

2. It starts out video game-y and honestly a little silly, but it will wreck you. 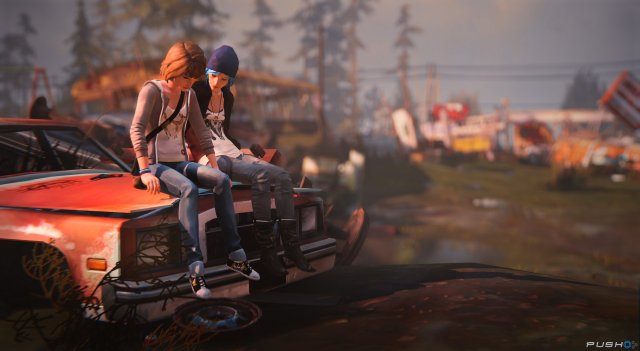 This is probably the right place to mention that this game really does get dark. It’s never gratuitous, but there’s a lot of content that could be triggering for a number of reasons, so you might want to do a little research before playing if that’s a concern. (And it’s also just really sad a lot of the time.) Having said that, the big moments are real big, but the quiet ones sneak up on you, and ultimately those are what have lingered for me. This game is FEELINGS. It’s secrets and sleepovers and nightswimming and it’s awkward and stupid and young. There are moments that are so perfectly teenage I could almost smell my old bedroom at my parents’ house, for better or worse. 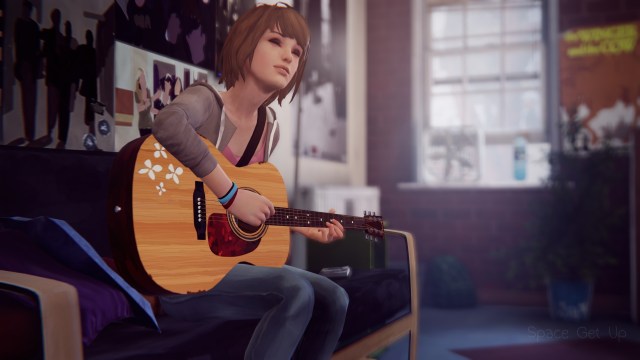 Graphically it’s not exactly cutting edge, but the color palette and the clutter is just so beautifully put together. It’s cohesive and atmospheric, and it has the perfect mopey indie rock soundtrack to ground you in it. I had the soundtrack playlist going on Spotify pretty much constantly from May to October last year. The worldbuilding is so complete and successful that you might, say, forget to progress the game for a few minutes because you’re too busy listening to “Bright Eyes” and watching the light stream in the windows.

4. Here’s a controversial thing: The language. It is very slang-heavy. 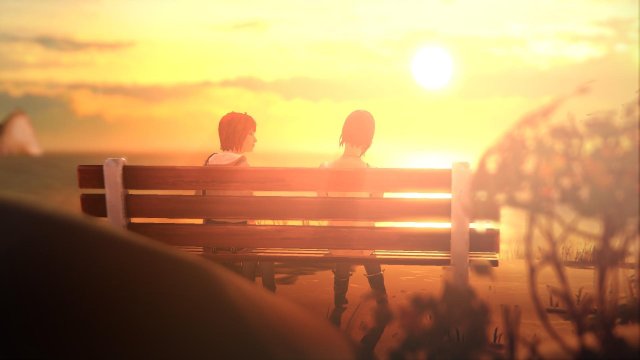 5. Sometimes you kind of need to be an asshole to get things done. 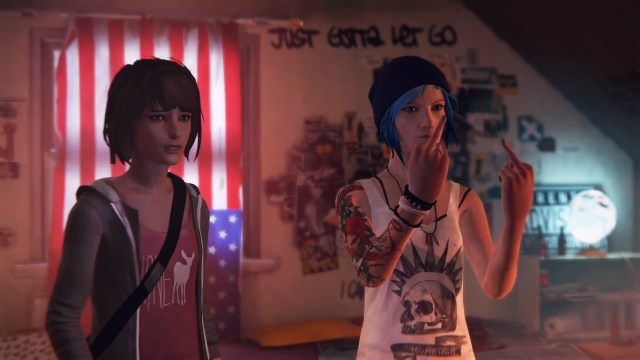 And sometimes it takes a lot of tries to figure out exactly how to do that, and sometimes that winds up being really funny to watch. But also, because you’re rewinding time, I always wonder, like, are there now five alternate timelines where Frank is covered in beans? I think there are. The game doesn’t confirm or deny it; the time stuff is vague. But there’s a lot of room for theorizing, and whether or not you think you’re creating branching timelines colors the morality of basically everything. Like, dropping paint on Victoria once is probably necessary, and rewinding it to watch it a couple times is understandable, but what if you’ve created three pointless timelines of sad Victorias with ruined cashmere just because it was funny? That’s just cruel, Max. 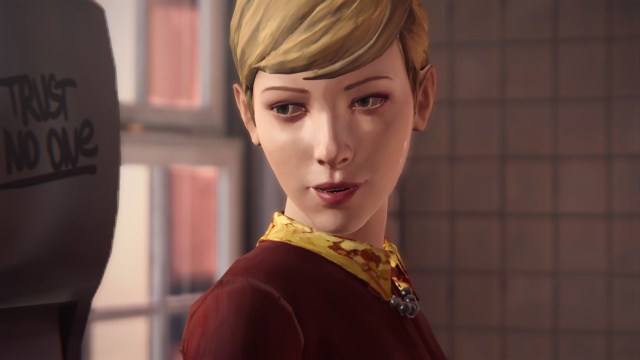 Okay this one is probably just me. She’s a horrible awful bully so naturally she is my favorite. Her dorm room is right across the hall from Max’s, which is something I have given very little thought to. She wears PEARLS. 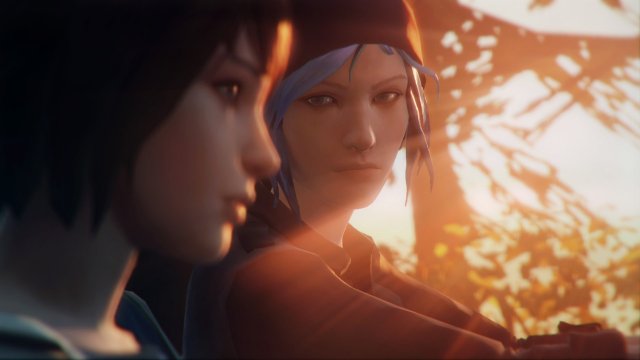 She’s the dream. She’s like a girl version of Jordan Catalano except she’s not the worst. She’s tall and broody and makes really bad decisions every single day, and she is precious. I can’t really talk about Chloe. I love Chloe. Maybe she’s not Jordan Catalano; maybe she’s Tim Riggins. She does drive a pickup truck.

8. You will be faced with important decisions 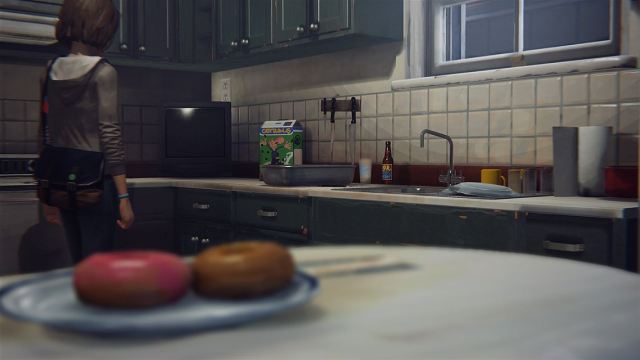 Such as: Breakfast: sweet or savory?

9. The feelings are really everything. 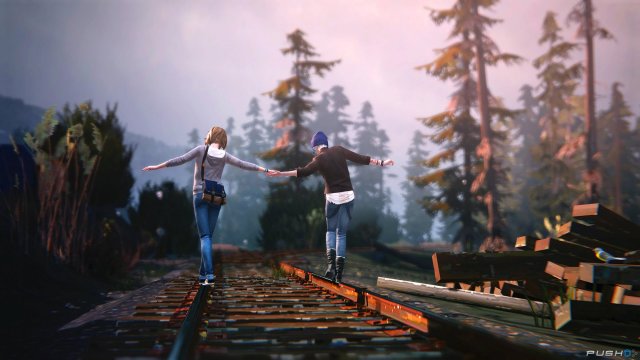 The main thing, though, which is hard to fully talk about without getting into spoilers, is that the game treats the feelings of these characters with a kind of respect that’s very rare. You get super powers, but there are no monsters to kill. A comparison I like to make is to Buffy, which was all “high school is hell” but then the plot was always there to remind you that actually there are more important things to worry about. Life Is Strange tells you the world is ending before it tells you what the world even is, and then it just puts you in it to live for a while and leaves it up to you to decide what the real story is. What is your life, what is your world, what would you save, what even can you save? Is it really your business to be saving anybody or anything? But the game is so immersive that you’ll forget all about it all for long stretches until suddenly you really can’t forget. I finished this game in October and I still think about it almost daily. 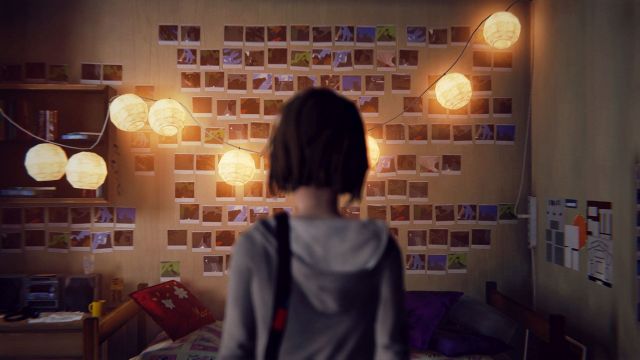 All five episodes were released for Mac simultaneously (and all five are also available on every other supported platform). You’ll never have to know how it felt to wait almost three months after Episode 4 to find out how the story ends. Although it might actually be a good move to space them out a bit. But you have the power: it’s up to you! (I would have rushed right through them, I just know it.)

Life Is Strange is available on PC, Mac, Ps3, Ps4, XBox 360 and XBox One. It will run you about $20 for the whole game (five episodes), and each episode takes about three to four hours to play through depending on how much you explore/how much time you spend sitting on a tree stump watching the world go by/how many times you rewind to see Alyssa get hit with a football. It was my favorite piece of media of 2015, and it’s possibly my favorite video game I’ve ever played. And if you play it, you can yell at me about time travel theory and the morality of superpowers. Actually you can yell at me about those things regardless, but if that’s the kind of stuff you like to yell about you really just ought to play this game.

(Developed by Dontnod Entertainment and published by Square Enix. Ported to Mac by Feral Interactive Ltd.)