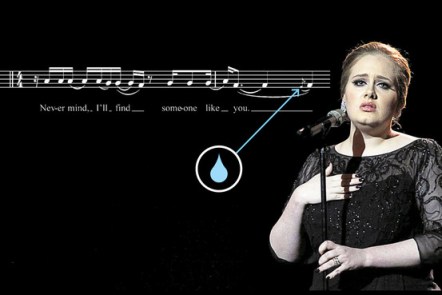 Via: The Wall Street Journal

You know those songs you listen to when you need a good cry? Or the ones that sneak up on you and make your eyes start leaking at inopportune moments? As it turns out, there’s some pretty rad science behind all those tears.

This week, the week of Adele’s Grammy sweep, the Wall Street Journal ran a story on what exactly it is about “Someone Like You” that pulls at everyone who listens to it.

“Twenty years ago, the British psychologist John Sloboda conducted a simple experiment. He asked music lovers to identify passages of songs that reliably set off a physical reaction, such as tears or goose bumps. Participants identified 20 tear-triggering passages, and when Dr. Sloboda analyzed their properties, a trend emerged: 18 contained a musical device called an ‘appoggiatura.’

An appoggiatura is a type of ornamental note that clashes with the melody just enough to create a dissonant sound. ‘This generates tension in the listener,’ said Martin Guhn, a psychologist at the University of British Columbia who co-wrote a 2007 study on the subject. ‘When the notes return to the anticipated melody, the tension resolves, and it feels good.‘”

Music theory and I broke up after a rocky relationship that lasted from 1998 to 2002, and from what I understand it was with good reason: music can be a manipulative bastard. But like most loves, it can also be a beautiful, heart-wrenching thing that makes you feel altogether human. The more you think about it, the more it makes sense: songs are more than just words set to music. There’s a reason that Sophie B. Hawkins song made me cry when I was 7, even though I’d never lost anyone I loved before.

Everyone likes the occasional cry, but songs don’t get to #1 by making people sad. So what’s up? Are we really just a bunch of masochists in love with our sadness?

“If ‘Someone Like You’ produces such intense sadness in listeners, why is it so popular? Last year, Robert Zatorre and his team of neuroscientists at McGill University reported that emotionally intense music releases dopamine in the pleasure and reward centers of the brain, similar to the effects of food, sex and drugs. This makes us feel good and motivates us to repeat the behavior.“

In the interest of your brains’s dopamine output, we’ve compiled a list of some of our favorite devastatingly beautiful songs.

Appoggiaturi from Autostraddle on 8tracks.

What are your favorite heart-bending songs?