According to Mary E. Galvin, who wrote a book about Modernist queer writers which I used for my essay about Gertrude Stein and Mina Loy, who was not queer, Gertrude Stein is the most famous lesbian ever aside from Sappho (she wrote this before Ellen & Portia took over the world).

But Gertrude, who I affectionately refer to in my head as “Gerty Steinberg” (why??), was more than just a lesbian, obviously. She was a lesbian writer. She wrote lesbian fiction and lesbian plays and also lesbian poetry which is relevant to us because it’s pure poetry week and we’re gay, or something. Wikipedia says that Gerty was a Republican and in 1934 thought Hitler should be awarded the Nobel Peace Prize, but, like, I dunno, it’s Wikipedia and I haven’t read that anywhere else. 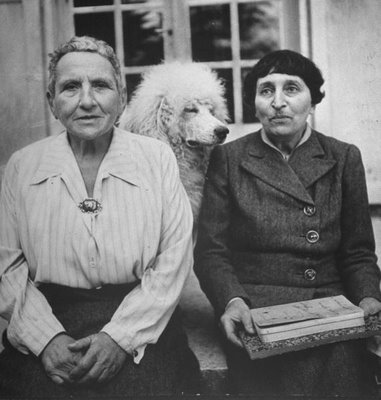 To be honest, the essay I wrote was not about Gerty’s life, so I don’t really know much about it. I hear she was a lesbian, and can’t really talk about anything else. But I do want to talk about her poetry.

Gerty only published one book of poetry in her lifetime, called Tender Buttons. It’s a fascinatingly weird thing, divided into three parts called Objects, Food, and Rooms. Gerty experimented with “verbal” cubism and prose poetry, and the result is a bunch of poems that look like absolute nonsense words relating to objects, food, and rooms, repeating themselves leaving you very confused.

For example, A Box:

Out of kindness comes redness and out of rudeness comes rapid same question, out of an eye comes research, out of selection comes painful cattle. So then the order is that a white way of being round is something suggesting a pin and is it disappointing, it is not, it is so rudimentary to be analysed and see a fine substance strangely, it is so earnest to have a green point not to red but to point again.

But a lot of Tender Buttons is about domestic space, and when you consider Gerty’s domestic space, it’s with another woman, so she’s writing from a female perspective about a home with no husband. Pretty cool for her time, huh?

(When I was doing research about this, someone suggested that ‘Ada’ was Alice’s nickname (Gerty’s partner), and ‘Aider’ is a play on ‘Ada’, as in, aid her, like, help her orgasm.)

I wish that I could find an online version of A Book Concluding With As A Wife Has A Cow: A Love Story because also according to someone whom I read while doing research, ‘cow’ really means ‘orgasm’. Fun times.

Anyways, the point is that you should read Tender Buttons. Also, “tender buttons”? FEMALE EROGENOUS ZONES. 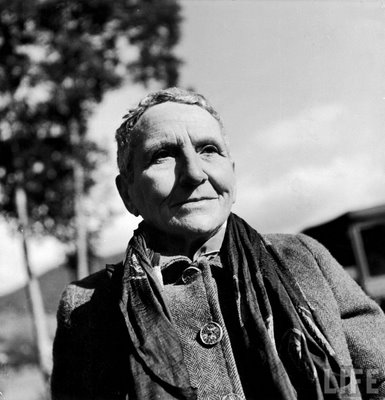 Now, moving on to Mina Loy. You might be wondering a) who is Mina Loy and b) why did I decide to stick her in a post with Gerty. Well, Mina Loy was also a Modernist poet (like Gertrude, though she was born later and lived longer), and she and Gerty were friends. Cool right?

In her time, Mina Loy was well known in North America and Europe, and now she is known nowhere. But you guys, Mina Loy was an awesome feminist single mother criticizer of the Patriarchy! She was popular with a lot of people, including one Ezra Pound who thought her work was so intelligent he invented the term ‘logopoeia’ to describe it.

Mina Loy claimed that she was “not a poet” despite writing over 300 poems. Unfortunately, most of them are not online. She also wrote a poem about Gertrude Stein, added in after her essay about Gerty:

She also wrote a poem about giving birth, which was a big Thing back in 1923. From Parturition:

Read all of Lunar Baedecker here, and if you have the chance, read some books with Mina Loy’s poetry in them! It’s kind of tricky since most of her stuff has been out of print since forever. The Lost Lunar Baedecker is a good place to start since it’s a compilation of a lot of her work. 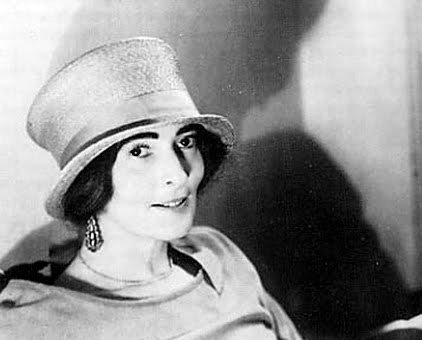 Mina Loy was a feisty woman and I feel very affectionate towards her. I feel like if she were alive today she would be a super woman who kicks Maggie Gallagher in the face. Also, poetry!