I liked Pablo Neruda from the moment I heard that he wrote a book called “20 Love Poems and a Desperate Song.” It was a while before I actually read any of his poems, but he was worth the wait.

Because the thing is, not all the good poetry is in English. People have said all kinds of beautiful things in thousands of languages. The good news is that we have translations. The bad news is that there are some things that don’t travel well from one language to another.  For me, that means learning other languages, even if it’s just a little bit. Por ejemplo: 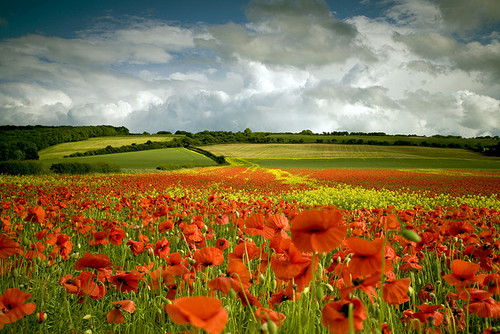 I know what poppies and jackals are, but I wouldn’t have any idea what he was doing with the words if I didn’t look at them in Spanish. Just because I like this poem, let’s look at my favorite section.

Can’t you just see the bicycle flying down the road? Other things you might want to know about Pablo Neruda are that he named himself that, he only wrote in green ink, he wrote odes to lots of things (his socks, the artichoke, big tunas), and he supported the Republican side during the Spanish Civil War. Spanish Republicans are not like American Republicans, they were the ones against Franco, who was about as oppressively right-oriented as you can get.

If you like what you see, don’t stop with Mr. Neruda. I would recommend Gustavo Adolfo Bécquer and Wislawa Szymborska. The limits of your language don’t have to mean the limits of your world. 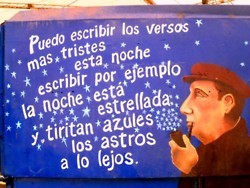