These days, Wikileaks is synonymous with Julian Assange. The ongoing court case against Assange for two counts of rape has almost subsumed the initial controversy of Wikileaks’ actual content; the Pentagon and federal government can both breathe a sigh of relief now that national attention is turned away from their indiscretions made public and towards pundits and internet personalities duking it out over whether an ideal of transparency trumps an individual’s crimes against women. Least important of all, it seems, is Wikileaks’ previous bad boy: Pfc. Bradley Manning, the soldier who turned over the diplomatic and military files that Wikileaks went on to publish. Manning was arrested in May and charged with “aiding the enemy,” and detained in a military jail in Kuwait.

Julian Assange is living in a mansion outside of London. Bradley Manning is forced to sleep naked in his cell in Quantico every night.

The justification is that it’s necessary as a “precautionary measure” against self-harm, which is plausible given that he’s previously been placed on suicide watch. Of course, those conditions were pretty shocking as well:

[Manning’s lawyer], writing on his office website, said that on Wednesday, against the recommendation of two forensic psychiatrists, the commander of the Quantico jail, James Averhart, listed Manning as a suicide risk, which meant he was confined to his cell 24 hours a day. “He was stripped of all clothing with the exception of his underwear. His prescription eyeglasses were taken away from him. He was forced to sit in essential blindness with the exception of the times that he was reading or given limited television privileges. During those times, his glasses were returned to him,” 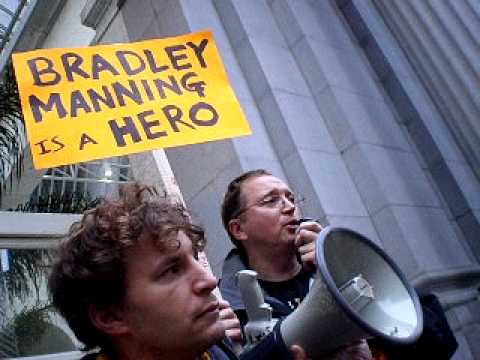 The details of why Manning has been ordered to maintain these precautionary measures are unknown; the brig commander says that he can’t disclose them “because to discuss the details would be a violation of Manning’s privacy.” No longer technically on suicide watch, Manning is still stripped completely naked each night, and then has to leave his cell to stand in the hallway for morning inspection each day, still completely naked in front of all other prisoners and guards. His clothing cannot be returned to him until after the inspection, say his guards, because that would require waking him up early.

First Lieutenant Scott Villiard, a spokesman for Quantico, told the Washington Post: “The most important thing is that we’re not treating Private Manning any differently from anyone else that would be in the same classification. Whether it’s maximum custody or prevention of injury, he’s being treated the same as anybody else.”

Manning is also monitored by guards’ observation and video recording at all times. Including when he’s locked in his cell naked each night.

Julian Assange was released on bail nine days after his arrest.

It’s hard to find an argument to be made here. As with everything else the military does, there are no hard facts, no clues or policies in place to protect anyone that the government has decided it needs protection from. Probably this regulation is in place for all prisoners; there is no way to know whether Manning really is being treated “any differently from anyone else that would be in the same classification.” The classification of aiding the enemy, of being regarded a traitor to your country at 23 for leaking (among other things) a video of an American helicopter in Iraq firing on a Reuters photographer and his driver, and then also on a van that stopped to help the wounded men. 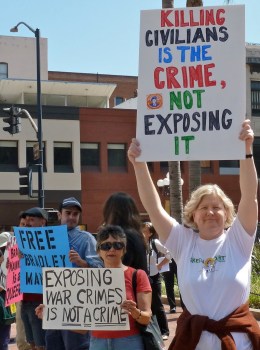 There is no way of determining the facts in those cases, and there may never be. The facts we do know are these: Assange is championed by many (though not all) major liberal voices, perhaps most notably Michael Moore, on the basis that the truths he is bringing to light are more important than any errors in judgment he may have made as an individual, while Bradley Manning is naked and forgotten in Quantico, his only comfort in the world the privilege of being allowed two blankets instead of one in his cell. (Although Anonymous has also indicated that they plan to come to his aid.) Assange is credited with Wikileaks’ potential to take the power of information away from the ruling bodies of the world, while Bradley Manning is vilified, despite the fact that his actions are almost identical to those of Daniel Ellberg’s leak forty years ago, and Ellberg is generally regarded by Democrats as an American hero. The facts are that Manning has not been convicted of a single charge, but has been in confinement for ten months straight.

Ironically (or maybe fittingly), one of Manning’s only supporters left seems to be Assange himself. “For him to now be in prison for 10 months in solitary confinement, without trial, is an abuse,” he said. “He is, whether the charges are true or not, America’s foremost political prisoner,” Assange added. “If these allegations are true, he’s an unparalleled hero.”