Did I ever walk the morning streets at twenty,
my limbs streaming with a purer joy?

I don’t remember when or how I started reading Adrienne Rich, but I’ll fill in the gaps because they’re just as true. I know it was my first year of college, might as well have been on a crisp blue fall day walking across Washington Square Park. Everything was across the park since I lived on the West side, and the fountain was a stone bowl collecting leaves.

I carried this worn little 1978 copy of The Dream of a Common Language that I’d scooped up at the used book store near Union Square and taken home to nurse. The book was well-worn before it came to me, emanating an odd, potent kind of energy from the minute I picked it up. The copy had been handled by a stranger for so long it had become a trapdoor to someone else’s interior experience altogether. I carried it with me, adding dog-ears to dog-ears, pencil to what was written in pen. 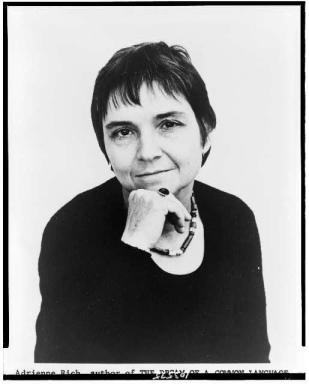 A year or two later, I met Rich at a reading in New York. She was a tiny woman with a body that folded into itself with age, but her eyes were sharp and bright. I hate meeting anyone I have even a fleeting reverence for, for fear of rupturing the solipsistic uniquely yours quality that makes you wear their work on your sleeve, like a heart you didn’t write. I downed a few cups of too-thick syrah, clasped her tiny hand and said very little.

I continued to take the train from Canal Street to 96th Street three times a week, employing all of strategies at my disposal to angle for a seat so I could enjoy the same poems for 34 minutes each way. Last year I moved to California with about five books, my first copy of The Dream of a Common Language among them, dog-eared and stuffed with the detritus of a different time.

My favorite poem is in a different collection of Rich entirely, another one, of course, very much worth owning:

“Diving Into the Wreck”

First having read the book of myths,
and loaded the camera,
and checked the edge of the knife-blade,
I put on
the body-armor of black rubber
the absurd flippers
the grave and awkward mask.
I am having to do this
not like Cousteau with his
assiduous team
aboard the sun-flooded schooner
but here alone.

There is a ladder.
The ladder is always there
hanging innocently
close to the side of the schooner.
We know what it is for,
we who have used it.
Otherwise
it is a piece of maritime floss
some sundry equipment.

I go down.
Rung after rung and still
the oxygen immerses me
the blue light
the clear atoms
of our human air.
I go down.
My flippers cripple me,
I crawl like an insect down the ladder
and there is no one
to tell me when the ocean
will begin.

First the air is blue and then
it is bluer and then green and then
black I am blacking out and yet
my mask is powerful
it pumps my blood with power
the sea is another story
the sea is not a question of power
I have to learn alone
to turn my body without force
in the deep element.

And now: it is easy to forget
what I came for
among so many who have always
lived here
swaying their crenellated fans
between the reefs
and besides
you breathe differently down here.

I came to explore the wreck.
The words are purposes.
The words are maps.
I came to see the damage that was done
and the treasures that prevail.
I stroke the beam of my lamp
slowly along the flank
of something more permanent
than fish or weed

the thing I came for:
the wreck and not the story of the wreck
the thing itself and not the myth
the drowned face always staring
toward the sun
the evidence of damage
worn by salt and away into this threadbare beauty
the ribs of the disaster
curving their assertion
among the tentative haunters.

This is the place.
And I am here, the mermaid whose dark hair
streams black, the merman in his armored body.
We circle silently
about the wreck
we dive into the hold.
I am she: I am he

whose drowned face sleeps with open eyes
whose breasts still bear the stress
whose silver, copper, vermeil cargo lies
obscurely inside barrels
half-wedged and left to rot
we are the half-destroyed instruments
that once held to a course
the water-eaten log
the fouled compass

We are, I am, you are
by cowardice or courage
the one who find our way
back to this scene
carrying a knife, a camera
a book of myths
in which
our names do not appear.