You guys! Did you enjoy Lemon’s comment awards last week? We missed her, but she did a stellar job while we were away at camp. Speaking of camp, let’s talk about all the things you did alone but also with us. Like read Riese’s writer’s edition of TIRTIL, Carmen’s instructions for pressing flowers and Alex’s graphic designer kit. Crystal counted down the top 10 fictional bands, Gabby shared her poem Kiss Kiss Bang Bang, and Carolyn interviewed the author of our book club book, Andrea Askowitz. Laneia and I made DIY facial scrub, Sarah “Sexual” Croce talked about 10 childhood “sports” she still likes to play, Carmen and Whitney wrote poetry, and Brittani, Whitney, Katrina, Gabby and Carmen discussed being a queer person of color. Finally, don’t forget to talk about the bundle of joy that was A Camp. But ours was not the only camp; Maeve went to the very first Rock Camp For Girls and lived (thrived, actually) to tell the tale. We rolled out our 2013 Miss May, Jade, and incidentally, Robin is having a Calendar Girl exhibition in the Long Island City Arts Open next week. Sarah talked about the importance of nutrition when you’re getting fit, we heard from the girls of western Massachusetts about Amherst and Northampton and Gabby told us all the crazy things white parents have said to her. Carolyn made a playlist for moving from somewhere old to somewhere new and Carmen made a weed rap playlist. The GLAAD media awards were this week and Brittani covered them, the teaser trailer for The Real L Word season 3 debuted (God help us), and Hannah Hart made quesadillas in her drunk kitchen. Riese somehow managed to recap a particularly bad episode of Glee, we watched some more No Man’s Land and Scribegrrrl recapped episode 2 of Lip Service. That’s all folks, but don’t forget to vote for your 10 favorite hot queer women for this years hot 100 list.

The How High Are You? Award to Carmen SanDiego: 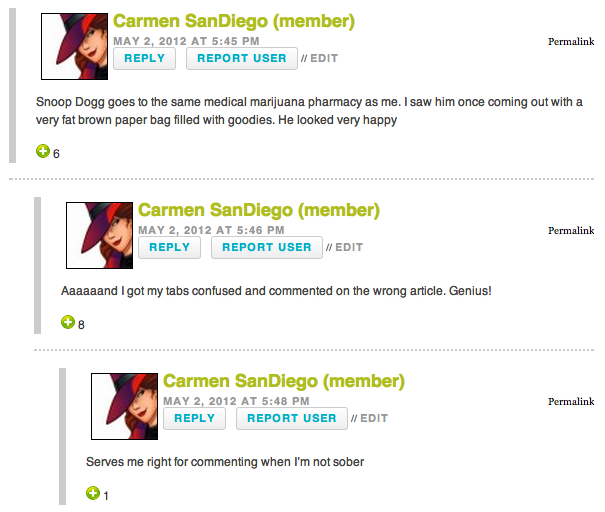 The chi-square Award to postscript : “there’s a strong positive correlation between the We Know You’re Gay scale and the Maddow scale. r-squared=.99999999
#nerd”

On Chester French’s “Black Girls” Video Might Make You Angry or Turn You On:

The Matter over Mind Award to Lone Wolf: “My brain is telling me to get all Foucault and Fanon on this but my body says otherwise…”

On OPEN THREAD: Let’s Talk About How Awesome A-Camp Was:

The That’s What Riese Said Award to Becca: “Riese really liked thanking us all for coming on the last night. Riese loves it when autostraddles come. She wants us all to come again. (A-camp is really just about coming).”

The Adorable Strangers Award to Ranger: “One afternoon I saw this random guy walking around. He seemed to be associated with the camp, like making a delivery or something. And he said, “Why are all these people here? Like, who are you?” and I answered, “We’re, um, all friends from this online community and we’ve come from all over the world and we all happen to be gay.” He had this look of wonder on his face and said, “That’s awesome, I’m so glad you guys have this. Have a great weekend.””

The BETH! is the new CAMP! Award to Vanessa: “Wait you guys, I already told some people this story but just get ready:
True life, on the last night, I got pretty teary eyed (read: also drunk) and Beth noticed me being sad. She offered me some ice cream and chocolate chips and I happily took her up on the offer. I then thanked her for having us, and she said, “We’ve loved having you, you’re such a strong wonderful group, I hope you’ll come back,” and then another camper said something like, “Well you know, not every campsite would be so welcoming to a group of queers, so we really appreciate it,” AND THEN BETH GOT EMOTIONAL and was like, “WELL THAT IS JUST HORRIBLE, THAT IS A SORRY STATE OF AFFAIRS, I HOPE THINGS CHANGE, EVERYONE SHOULD BE ALLOWED TO CAMP.”
So basically, if you’re not already in love with Beth…I’d say now would be the time to hop on that love train?
Also I miss camp.”

The Accentuate the Positive Award to Dina: “Yesterday I was buying something at a antique shop in Santa Barbara when this dude said something like “I have to listen to her because she’s my boss. Normally I don’t listen to women.” Normally I would have just seethed but instead I smiled and said, “You know, we’ve got some really good things to say!” Which felt a hell of a lot better.”

On Freelance Graphic Designer: The Kit:

The Graphic Nightmare Award to Libby: “Awesome resources. This Graphic Design student thanks you! On a related note, I just got a part-time cleaning job for a kindergarten and it’s horrifying… Comic Sans… Comic Sans everywhere!”

On Make Sweet Poetry With Us:

The Gayyyyyyyy (And Wonderful) Award to krf1117: “tonight i sent a girl love notes across the table at a birthday party for someone i didn’t know and got her to take me to her house. we made suggestive blackout poetry from a car review article then went to her room and cuddled. it was probably one of the best nights of my life.”

The I See What You Did There Award to Carrie: “Lemme put my Log in your Cabin.”

The Jesus Christ, Superstar Award to Cassandra : “You can find some examples in Matthew 7:3-12, commonly known as the Parable of What the Fuck is Wrong With You?”