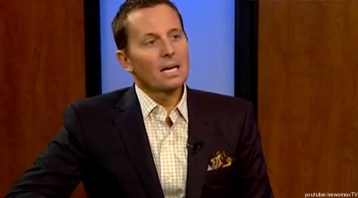 Well, that was “fun” while it lasted!

Some were surprised when Mitt Romney’s campaign hired an openly gay Republican foreign policy spokesman named Richard Grenell last month. Those surprised people will probably feel less surprised to hear that Grenell “abruptly resigned on Tuesday after antigay elements in the party criticized his appointment and some Republican advisers said Mr. Grenell had been sidelined by the campaign during a busy foreign policy week.”

In a statement, the Romney campaign claimed it had tried to stop Grenell from quitting. The Times reports, in a somewhat confusing phrase, that “while Mr. Grenell’s sexual orientation was not an issue for the campaign, the Romney team had cut Mr. Grenell out of the loop on some issues after feeling a surprising pressure from some social conservatives.”

Before we go any further, let’s get this out of the way: Richard Grenell is an asshole. Read his twitter feed for more than five minutes and you’ll lose any compassion you had for the guy or any sense of being members of the same minority group. Not only does he childishly argue constantly with journalists and celebrities — he’s particularly obsessed with Buzzfeed and Rosie O’Donnell — but he also doles out generous doses of disgusting misogyny on the reg. He notes that Hillary Clinton “is starting to look liek [sic] Madeline Albright,” is inspired by a naked & pregnant Jessica Simpson to lament “if only air-brushing was permanent” and even suggests that Our Lady Rachel Maddow “needs to take a breath [sic] and put on a necklace.” Furthermore, he complains, while “forced to watch #msnbc on gym TV,” that “the Rachel Maddow commercials can’t possibly attract any viewers, aside from Bieber fans. #DeadRinger.”

But regardless of the fact that his misogyny shoots straight along party lines, his departure still makes a pretty strong statement about how, exactly, the anti-gay agenda is threatening to destroy the Unit Cohesion of the Republican party.

Grenell’s statement to the press is pretty choice:

I have decided to resign from the Romney campaign as the Foreign Policy and National Security Spokesman. While I welcomed the challenge to confront President Obama’s foreign policy failures and weak leadership on the world stage, my ability to speak clearly and forcefully on the issues has been greatly diminished by the hyper-partisan discussion of personal issues that sometimes comes from a presidential campaign. I want to thank Governor Romney for his belief in me and my abilities and his clear message to me that being openly gay was a non-issue for him and his team.

Many of the more right-wing extremists in Romney’s base, such as the American Family Association, were quite clearly troubled by Grenell’s appointment when it happened. Bryan Fischer of the AFA said that Romney’s selection of an “out & loud gay” was a “message to the pro-family community: drop dead.” (Ever notice how gay people are always hyperbolically “out & loud” or “out & proud” when conservatives talk about them?)

Matthew J. Franck of The National Review had expressed concern regarding Grenell’s feelings about same-sex marriage, saying that “Grenell has made a particular crusade of the marriage issue, with a kind of unhinged devotion that suggests a man with questionable judgment.” Furthermore, Franck fretted:

And when the Obama State Department is already moving to elevate the gay-rights agenda to a higher plane than religious freedom in the foreign policy of the United States, it is reasonable to wonder whether Grenell, after taking such a prominent place in the Romney campaign’s foreign-policy shop, would be in line for an influential State posting where he could pursue his passion for that same agenda. 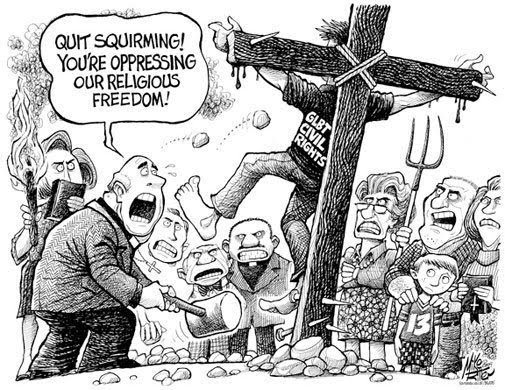 We reported last July that although Republican supporters are a long way from supporting same-sex marriage, many are also generally tired of anti-gay issues occupying such a prominent role in the Republican platform. Furthermore, the Obama administration has made some strides towards equality over the last four years and promised more to come in a second term. So, now that the anti-gays can no longer depend absolutely on the majority of their base supporting the ongoing elevation of anti-gay issues, they’re essentially freaking out.

The tone of the anti-gay rhetoric surrounding this campaign is distinctly extreme and surprisingly elevated, even compared to last time around  — like the last dying wail of a miserable, desperate beast. Whereas in 2008 the appointment of an openly gay spokesman might have seemed more innocuous despite the party’s stronger anti-gay consensus at that time, it’s now seen as a genuine risk or a sign of end-times for the bigotry platform. 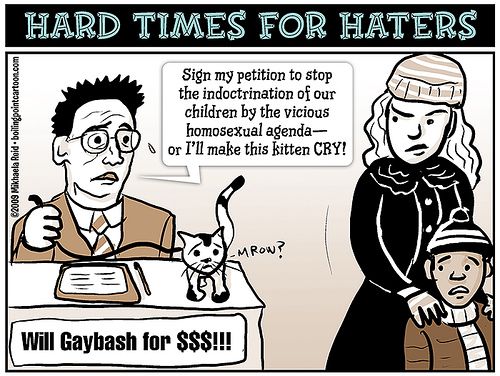 R.Clarke Cooper of the Log Cabin Republicans (that’s the Gay Republican club) said it was “unfortunate that while the Romney campaign made it clear that Grenell being an openly gay man was a non-issue for the governor and his team, the hyper-partisan discussion of issues unrelated to Ric’s national security qualifications threatened to compromise his effectiveness on the campaign trail.”

Short of actually condemning their own party and going a long way towards finding a way to vilify the left, the Log Cabin Republicans claim that “Ric was essentially hounded by the far right and far left.”

The Romney campaign says they’re disappointed somebody with such esteemed professional qualifications left their team for “personal reasons.” Because you know — G-d forbid someone should take personal offense to political invasions of their personal business.