Long Beach Gay & Lesbian Pride Festival just announced that Queen Latifah has signed on to be their headliner.  She’ll be performing on their mainstage Saturday, May 19th, 2012 and this is kind of a big deal, ya’ll. Queen Latifah has never publicly endorsed/performed at a gay pride event. This is not to say she’s never been to one or participated in gay stuff privately. This is only a note to highlight her first for real homo show. Pat Crosby, Co- President of Long Beach Pride, states:

“…For her to make her worldwide Pride debut here in Long Beach is a tremendous testament to the popularity of our celebration and to the strength of our community.”

I’m kinda wondering why New Jersey pride didn’t scoop the Queen, considering that’s where she’s from, but life isn’t perfect. I’m dealing. Anywhoos, in her own way Queen Latifah has given the gay & lesbian community mega props. The Queen has played a lesbian in a few acting roles — and not just any kind of lesbian, like the super awesome tough kinda lesbian. Her most famous lesbi-part being ‘Cleo’ in Set It Off (1996). 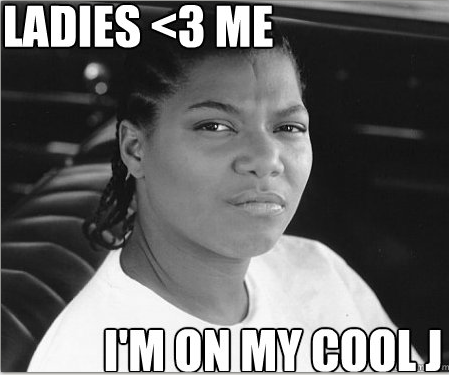 This role keeps the gay rumors about Queen Latifah – government name : Dana Owens – ever circulating. (Cuz obvs only an actual lesbian could play one in the movies, right?) Oh and these adorable pics of her and then alleged girlfriend, aka. personal trainer, Jeanette Jenkins, totally help. I’ve always wondered if Queen Latifah was actually a lesbian and if her and Missy Elliot threw wild lesbian sex parties. (Which could like totally be true. Thanks for fueling my fantasies HuffPo!) But there’s never been any solid evidence to support these daydreams, only out of context quotes from eager bloggers jumping on tidbits of interviews from Sister 2 Sister magazine and gossip from ladies night parties in all major metropolitan areas. Queen Latifah has constantly stated that her private life is just that: private and hers.

Latifah is a Grammy-winning, Oscar-nominated, multi-talented powerhouse of awesome, not to mention a Cover Girl and a badass. She doesn’t need to say or be anything other than the person she’s always shared with us. Long Beach Pride 2012 is going to be the shit with her as their headlining act.

Note to the Queen: If you’re reading this, know you’ll always be the reason I learned never to let anyone call me a bitch.

Go to Longbeachpride.com for more information on their pride festivities.

Also, am I the only one who ever really fantasized about those QueenLa/MissyEll lesbo sex parties?? Share thoughts on this. Share stories if you’ve been to one!