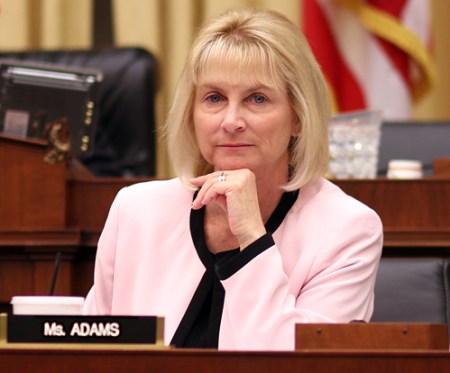 Earlier in the year, the Republican Party raised any eyebrows that weren’t already raised at its apparent total disregard for the needs of women when it was reluctant to renew the Violence Against Women Act because it included new protections for gay people and undocumented immigrants. VAWA provides federal funding to investigate and prosecute domestic and intimate partner violence, and upon finding out that it might benefit people whom the GOP has actively tried to restrict from equal access to rights, health, and safety, they hesitated to continue supporting it.

While the Senate has approved the re-authorization of VAWA, with LGBT protections included, the Republican-controlled House has introduced its own version of the bill, which is of course stripped of provisions for queer people. In her statement about the bill, Republican Rep. Sandy Adams (who has a personal history of work in law enforcement as well as experience of domestic violence) said pointedly that “It is my hope that my colleagues in both the House and Senate can put politics aside and support this lifesaving legislation. Too many lives are at stake for us to give anything less.”

During the initial discussion of the bill, some wondered whether the Democratic legislators who had added in the new provisions were, in fact, playing politics — whether they wanted to maneuver Republicans into rejecting legislation that seemed objectively necessary, and make them out to be the “bad guys” for both women and queers (and queer women). Others thought that Democrats were, in fact, genuinely motivated to support queer (and immigrant) communities, and were recognizing the fact that same-sex couples experience roughly equal levels of intimate partner violence as straight ones, but have significantly less access to support or resources and significantly fewer resources of their own (economic, familial, or communal) to call upon. It’s possible that the real answer is both, or somewhere in between. Regardless of Democrats’ intentions in altering the bill, however, the fact is that the Republican House actually is rejecting legislation that’s objectively necessary, or at least only agreeing to it in the case that it helps those they’ve deemed worthy of safety and security, and leaves in the cold those whom it doesn’t. And the blame for that falls on no one’s heads but theirs.

Sandy Adams’ stripped-down version of VAWA is described as “likely to pass,” at least in the House. Adams has said that she thinks the new provisions are “unnecessary,” and that there’s no evidence anyone is being turned away from resources because of their identity. This is despite the fact that according to ThinkProgress, 44% of LGBT domestic violence victims who asked for help or support were turned away last year — and that’s only out of those who felt comfortable seeking help. Even if that weren’t true, there’s still no excuse for a legislative body meant to represent and protect the people — all of them — to refuse protections to a specific group that are explicitly granted to the majority simply because it doesn’t want to deal with them. The only way that an argument that LGBT provisions are “unnecessary” makes sense is if domestic violence doesn’t exist in LGBT communities, and it’s well documented that it does. There’s a fine line between not knowing and not caring, and the House Republicans who are pushing the weakened version of VAWA are close to it. It’s possible that the House will succeed in cutting out the new, necessary protections afforded by the updated version of VAWA, and add another milestone to their campaign against women and queers. And in doing so, they’ll go down in history not just as people who didn’t work to help marginalized communities, but as people who actively reached out to throw them under the bus.