You were probably planning on living out the rest of your day not thinking about how terrible it would be to have someone film your life, then edit it to tiny unrecognizable bits, then sew those bits back together and package them as reality and then sell that stitched up reality to Showtime for what must be an ungodly amount of money, otherwise why would it keep happening??? Weren’t you?

Well strap on (GET IT) your disappointment hats because today’s the day you get to watch the very first teaser for Showtime’s Most Poorly Edited and Brain Numbingly Boring Epicenter of Lesbian *Reality, The Real L Word! 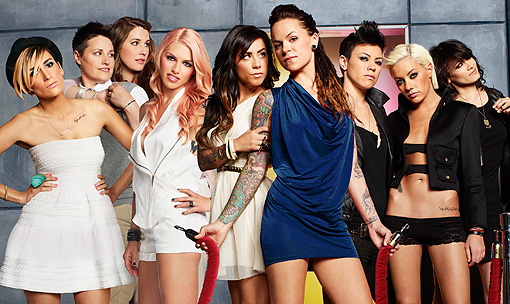 Don’t even ask me how you’re ever supposed to listen to “Rebel Girl” again without thinking of this moment, because I have no idea.

Whitney, Romi, Sara, Kacy and Cori will be returning for a third round of what-the-fuck-ever and this season will also see the show expand to both coasts, with an LA cast and a New York City cast. From Entertainment Weekly, these are the bios of the new cast members (which includes members of the band Hunter Valentine, who are smokin’ hot):

Lauren (CEO of jewelry company) – LA
Claiming L.A. as the hub of the lesbian scene in America, Lauren and her friends are having a great time in the middle of it all. A committed bachelor, Lauren is anxiously awaiting the move from NYC of her best friend with benefits, Amanda. But when Amanda arrives in Lauren’s home, it’s hard to keep her emotions at bay as this non-couple navigate their relationship.

Kiyomi (rock band front woman) – NYC
Kiyomi is the ultra-cool, heartbreaking rock star at the center of Hunter Valentine. A natural leader, Kiyomi is extremely stubborn and fiercely committed to the band that she believes is on the brink of making it big. Along with band mates Laura, Vero, and Somer, Kiyomi is trying to balance a relationship at home with the demands of a rock star lifestyle.

Somer (rock band rhythm guitarist) – NYC
Somer is having trouble trying to live a “normal” life, including domestication, babies and, property with her new wife, yet still stay on the adrenaline-and-whiskey-infused rock star train that is her all-lesbian punk band. Since angsty Somer was voted by friends as “most likely to break a bottle at a bar,” it’s easy to see her conundrum. The newest member of Hunter Valentine is still struggling to figure out where she fits in this band of alpha females, but insists on having fun while she’s doing it.

Amanda (PR/real estate/socialite) – NYC/LA
Amanda’s making the move to the West Coast to reunite with her BFF and partner in crime, Lauren. At home in high society, Amanda won’t hesitate to call out anyone who doesn’t make the grade. A true New Yorker at heart and known as a high-energy jetsetter, Amanda finds it difficult to jibe with the relaxed SoCal attitude.

Also, I just want to say one thing. We held an Ask-Us-Anything panel at our A-Camp event last weekend and it was a blasty blast; I couldn’t have enjoyed myself more if Rachel had been naked and covered in strawberry pancake syrup. An audience member, Kate (hi Kate!), asked Riese if she’d be recapping the third season of The Real L Word, and of course Riese said yes because, of course, Riese likes traffic. But then! We polled the audience to see how many of them only read the recaps and NEVER watch the show and do you know what we learned?? Hardly a single damn one of you watch the actual show! You’re only in it for the recaps.

I just think that’s important to remember, when you’re thinking about how your day was going to be just fine and then this post happened.

Before you go! It takes funding to keep this publication by and for queer women and trans people of all genders running every day. And A+ members keep the majority of our site free for everyone. Still, 99.9% of our readers are not members. A+ membership starts at just $4/month. If you're able to, will you join A+ and keep Autostraddle here and working for everyone?
Join A+
Related:Daily Fixilene chaikenKiyomi McCloskey - The Real L Word / Musicianreal l word season threethe real l wordwhitney mixter