For those who lived in Massachusetts during Mitt Romney’s term as governor, his rise to the national stage can feel a little like watching your ex with someone new — you want to tell everyone about the side of them you know before they get into trouble. In Romney’s case, this means being hyperaware that while Romney is courting voters on every part of the conservatism spectrum from “doesn’t like Cartoon Network’s Adult Swim” to “doesn’t think women should vote,” he has a very specific history with gay marriage and gay rights in MA that his conservative base may not approve of. 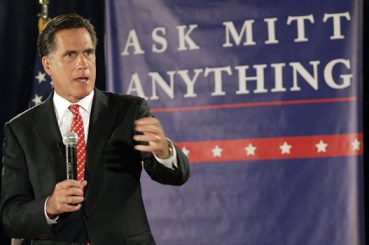 "what do i do if my girlfriend and i accidentally wear the same shirt and it's too late to change?"

As the LA Times points out, while Romney’s anti-marriage equality stance is common knowledge as part of his platform for the GOP candidacy, back when he was governor of MA, his opinion on the matter wasn’t quite as clear-cut. While Romney has always opposed same-sex marriage, he also “vowed while running [for governor] in Massachusetts to defend and expand the rights of gays and lesbians.” Perhaps most importantly, when marriage equality was made law in 2004 in Massachusetts, Romney initially promised to honor the decision, despite the agitation of conservative groups in-state. Of course, Romney later went on to attempt to block the ruling and, in the process, invoked a law dating back virtually to Massachusetts’ colonial days that barred out-of-state couples from getting married in MA. But his reversal came off as calculated (especially in light of his 2008 presidential run), and may illustrate something important about Romney as a candidate: whatever his actual personal or political values might be, they come second to what Romney thinks voters want from him.

Of course, all politicians edit and evolve their beliefs in order to get into or stay in office; one could make an argument that that is in fact what politics (or campaigning) is. But for a politician who’s attempting to become president in one of the most polarized political environments in history, it could be significant. Right now, Romney is trying to appeal to the conservative vote, but the tide is shifting on gay marriage — it seems likely that in the near future, supporting gay marriage will be the more politically expedient move than opposing it. Of course, a more ideal situation might be not having a Republican in the White House at all. But if Romney is that Republican, having a conservative in office with a history of changing his mind to be more popular might be a game-changer.