It seems unlikely that history will remember 2012 as the year that gay marriage was legalized nationally. But it seems like it might be remembered as the year that we knew beyond a shadow of a doubt that marriage equality was in our future.

2011 was a banner year for marriage equality in a lot of ways. For instance, a Gallup poll showed that the majority of Americans support marriage equality for the first time in American history. But in 2012, we’ve seen a variety of steps forward, in the arenas of culture and entertainment and politics. How much progress do we have to make before we can use the word “inevitable?” 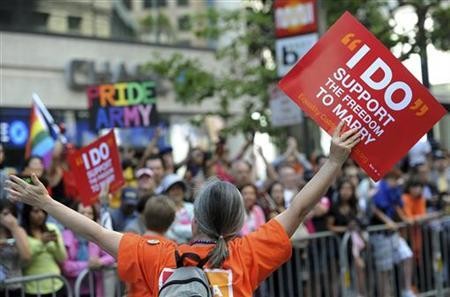 The signs that the day might be here are all over. For instance, even though ballot measures and popular votes don’t tend to play out well for marriage equality, the numbers may be beginning to shift in our favor. A new poll shows that California, where voters passed Proposition 8 and ended marriage equality in California, there’s now a 59% majority in favor of gay marriage. Jeff Prang, the mayor of West Hollywood, describes this as “a tremendous amount of incremental change” — something that maybe very aptly describes the nation’s journey with marriage equality in general.

Some attribute marriage equality’s popularity with its resignification as a “family values” issue — recent state campaigns have centered not around ideas of equality so much as the personal experience of gay families, and how since they have the same feelings of love and commitment as straight ones, they deserve the same rights. As Chris Gregoire said:

“We need to ask ourselves: How would it feel to be a child of a gay couple?” asked Washington’s Democratic governor, Chris Gregoire, who signed the state’s legislation Feb. 13 after having announced her support for it a month earlier. “How can we tell these children that their parents’ love is seen as unequal under Washington law?”

And if our newfound groundswell of support isn’t convincing that marriage equality may be in everyone’s future relatively soon, there’s the fact that our opponents think so, too. Almost a year ago, Focus on the Family admitted that they knew they would lose the battle for marriage equality. Now, columnist Tim Stanley, whose other writing credits tellingly include a biography of Pat Buchanan, says that “despite consistent public opposition, there is a growing sense of inevitability about gay marriage.” Granted, he also thinks that this will lead to polygamy, “redefinition of marriage,” and obviously incest. But even the guy who thinks that “if American law decides that marriage is about anything other than one man, one woman for the (at least hypothetical) purpose of procreation, then it becomes sheer bigotry to deny the right of any other combination of people to enjoy it” thinks that this is in our future; granted, he problematically attributes it to Hollywood as opposed to the blood, sweat and tears of generations of activists, but he can’t argue that it’s not our reality. It seems fair to call that something to celebrate.

There’s more to full equality than same-sex marriage, and our status as second-class citizens is more complicated than being allowed to go down to city hall and get a marriage license. But our country’s opinions on whether or not we should be allowed to love each other are connected to their ideas of whether we’re real people and worthy of happiness, and any move in that direction is a good thing. What we’re seeing here isn’t just a move in that direction but several, from a lot of different places. Which means there’s no turning back now; the moral arc of a nation’s history is long, but it’s finally bending towards us.