As we mentioned yesterday in light of the sad news in Minnesota, Focus on the Family’s president has recently admitted in interviews that he sees his organization losing the fight on gay marriage.

We’re losing on that one, especially among the 20- and 30-somethings: 65 to 70 percent of them favor same-sex marriage. I don’t know if that’s going to change with a little more age—demographers would say probably not. We’ve probably lost that. I don’t want to be extremist here, but I think we need to start calculating where we are in the culture. 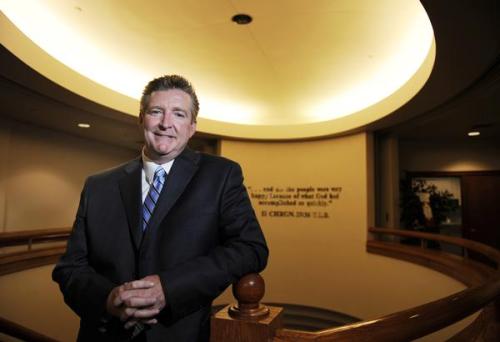 JIM DALY OF FOCUS ON THE FAMILY

This seems like big news, no? Focus on the Family is only one organization fighting against marriage equality – it’s possible that the American Family Association and NOM would vehemently deny this statement – but they’re not a minor one, either. So what does his announcement mean? Well, here’s the rest of his organizations’ take on it:

“Jim was asked a question in an interview and honestly acknowledged what the cultural trend is in polling on same-sex marriage, especially among younger Americans. Some commentators have treated his answer as big news, but it’s really just another expression of what he’s been saying for years: Christians can’t expect the culture to be the church. As followers of Christ, and believers in God’s Word, we are called to speak the truth in love, and advocate for it respectfully in public policy, regardless of opinion polls or shifting political winds.

“America’s changing attitudes on same-sex marriage, as Jim also told World, should not discourage Christians. Through our sister organization, CitizenLink, we will continue to advance marriage-protection amendments and legislation, encouraged by the fact that voters in 31 states have defended marriage at the ballot box. Beyond the realm of policy, though, we hope this moment in time will be embraced by Christians as an opportunity to do a better job modeling the beauty and permanence of one-man, one-woman marriage. By strengthening our own marriages, and those in our faith communities, we offer strength to the culture.”

It doesn’t seem like overstating the issue to say that there are some contradictory statements here. Clearly, the overriding theme is of faith and witnessing in the political realm; the idea of working for a political aim that you feel your faith calls you to, even if you don’t know that it will be achieved, is plainly stated, and not unrelatable.

I guess it’s understandable that, even given their president’s reservations, they plan to continue with this fight – belief in the face of unreliable odds is, of course, what faith is. But questions remain.

Perhaps the first and most obvious thing: “Christians can’t expect the culture to be the church?” Of course there are millions of Christians in America who fully understand and respect the separation of church and state, but none of those seem to be the Christians in charge of any of the organizations leading the fight against marriage equality. One of the only defendant witnesses in the Prop 8 trial – whose job was to provide legally sound testimony as to why the government sanction of gay unions would be detrimental to the country – was William Hak-shing Tam, head of the America Return To God Prayer Movement. The campaign that he worked on along with Protect Marriage, was funded in large part by the Mormon church. That seems like more than an expectation of national church culture – it seems like it’s been made a reality.

And then there’s the “calling to speak the truth in love,” which is a genuinely admirable and courageous task to undertake, one that we should commend anyone of any faith or background for pursuing. Except that hasn’t been done in this case, ever. William Tam told members of his church that homosexuals were twelve times more likely to molest children than straight people, and then admitted in court that he had no basis for believing it. Blatantly untrue information was disseminated as fact by anti-gay organizations, telling parents that their children would be required to “learn gay marriage in school” if laws like Prop 8 weren’t upheld. In actuality, there was never any language on the ballots at the time at all about public school curriculum. (Although sidenote, there is now!) But looking at ads like this, you would never have known it.

There is one part of Focus on the Family’s statement, though, that rings true, and that I hope their followers are genuinely committed to. “Beyond the realm of policy, though, we hope this moment in time will be embraced by Christians as an opportunity to do a better job modeling the beauty and permanence of one-man, one-woman marriage. By strengthening our own marriages, and those in our faith communities, we offer strength to the culture.” To be honest, that’s something I think many of us have wondered over the years – who are these people who are so committed to making sure we can’t enjoy the same security of family life that they do? Don’t they have families? Aren’t there children they should be watching grow up instead of spending their time making sure other children feel ashamed and confused about their families? For all of our sake, let’s hope that committed heterosexual Christian couples do try to do a better job modeling the beauty and permanence that marriage can convey on a relationship; let’s hope that they do resolve to strengthen marriage, and offer strength to the community. Maybe in doing so, they’ll realize that when one marriage and one family are stronger and safer, it makes all of us stronger and safer. And that goes for our queer families, too.