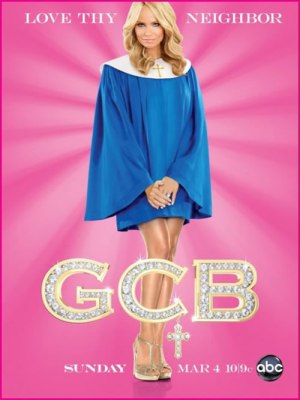 Kristin Chenoweth is a pretty lady that you probably know from Wicked and/or Glee, but really, she’s a great person/performer who you should probably know from other things too. For example, once upon a time, Newsweek said some nasty, homophobic things about her Promises, Promises co-star Sean Hayes, so she submitted a response to them, and then she won a award from GLAAD, and then she talked to us and is basically our bff.

Before Glee was a fetus-thought in Ryan Murphy’s mind, Kristin Chenoweth was scraping by doing musicals like A New Brain and Steel Pier. Fast forward 14 years, and she’s starring in ABC’s new comedy GCB (formally Good Christian Bitches). It premiered last night, and I haven’t watched it yet, but Television Without Pity said it was pretty good.

Here are eight performances by Kristin Chenoweth in the order that I thought of them!

I know people have a lot of feelings about their favorite Cunégonde (i.e. everyone loves Barbra Cook, I guess), but as far as I’m concerned, Kristin is definitive. She has the perfect kind of innocence and goofiness and self-awareness, and you seriously cannot argue with her high note at the end of of “Glitter and Be Gay.” Cunégonde is admittedly similar to Glinda, but come on. This is perfect.

Also, you should watch Forbidden Broadway’s “Glitter and Be Glib.”

I used to hate Marian and her big song, “My White Knight,” and then I realized it’s probably the best number in the show. Chenoweth’s phrasing is excellent in this song, and I am a little obsessed with how she pronounces “ashamed” differently each time she says it, like she sings it through her nose the second time. I should go outside more. Anyway, she did a good job in this movie. Matthew Broderick makes a strange Harold Hill, but it’s got a few noteworthy performances.

Aka, “Cheno Gets Real For Two Seasons.” Annabeth was the shit.

This is the best TV show of all time, full stop. The writing was great, the characters were funny and well-developed, and they weren’t afraid to be ridiculous, which is why Kristin Chenoweth and Ellen Green sang every once in a while. Ugh, it was so good.

A lot of people think she won her Tony for Wicked, but it was for this gem. It was not a strong year for featured actresses in musicals, so it might actually be an overrated performance. I will quote this show at you all day if you let me. One time, she told Seth Rudetsky that the reason she goes into full head voice in the middle of “My New Philosophy” is because that’s Sally’s grown-up voice. I feel like it was because she wanted to show off, but it’s a good moment regardless. I think it’s interesting, anyway. Whatever, your judgmental eyes can’t sting me through the internet.

Sometime between winning a Tony and starring in a musical normal people care about, Kristin’s solo album “Let Yourself Go” happened, and trust me, it is 16 tracks of amazing. She has so much vocal control, you guys! I especially recommend the title track, “How Long Has This Been Going On,” “If You Hadn’t But You Did,” and “Daddy.”  Also, “Taylor the Latte Boy” is not on this CD, but you should listen to that one too. Sidenote, this album was released around the same time as NSYNC’s “No Strings Attached.” Guess which one I owned!

(spoilers in the video)

This movie is weird and kind of depressing, but it features Kristin Chenoweth with a lesbian moment and comes with an Evan-Rachel-Wood-Bisexual bonus. It’s worth Netflixing.