During a breakfast event meant to celebrate the mayor of Manchester’s endorsement of Romney, Romney was schmoozing his way through tables full of attendees and began chatting with Garon, who asked Romney whether he supports the proposed repeal of New Hampshire’s marriage equality law. Romney responded that he did want it repealed, and when pressed, went on to say that he would oppose any legislation that “would change the law so that gay servicemen would get the same benefits as heterosexual couples.” The conversation that followed was one of the more straightforward things you might ever hear a politician say. 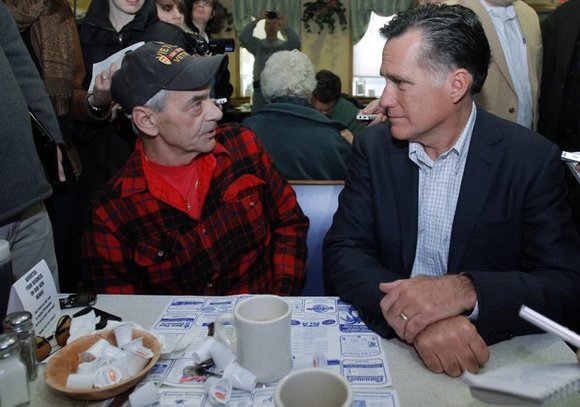 “I believe marriage is a relationship between a man and a woman,” Romney said. “We apparently disagree on that.”

“It’s good to know how you feel, that you do not believe everyone is entitled to their constitutional rights,” the 63-year-old New Hampshire resident responded.

“No, actually I think at the time the Constitution was written it was pretty clear marriage was between a man and a woman,” Romney said, just as one of his campaign aides chimed in that they had “to get going” to another Fox interview.

“Oh, I guess the question was too hot,” Garon quipped to Romney and his aide.

“You did and I appreciate your answer. And I learned something, New Hampshire is right, you have to look a man in the eye to get a good answer and you know what governor?” Garon said, pausing. “Good luck. You’re going to need it.”

Garon was in fact sitting at the booth with his husband, and when asked about his investment in the issue by the press, said:

“Because I’m gay, all right?” he said. “And I happen to love a man just like you probably love your wife… I went and fought for my country and I think my spouse should be entitled to the same [benefits as they would] if I were married to a woman,” he said. “What the hell is the difference?”

Given the most important values of Republican rhetoric, and the fact that military service is prized above virtually anything else by most conservative candidates, there’s almost no way for Romney to openly deny Garon his rights without looking like both a hypocrite and an asshole. Garon fought in Vietnam, the war in which American soldiers returned home to find themselves without support or understanding on top of their own personal aftermath. And then Garon, and other soldiers like him, had to spend the next 50 years without even the basic economic benefits that their comrades received. Mitt Romney has no military service to his name. While the Republican political machine doesn’t necessarily shy away from paradox or contradiction (advocating for a small government that simultaneously interferes with the personal lives of its citizens by regulating marriage and reproductive health, for instance), denying soldiers who have served their country is pretty indefensible.

The repeal of DADT was in many ways specific to the community of queer military servicemembers; it didn’t concretely benefit the larger community, and didn’t even give gay servicemembers a lot of tangible benefits or allow for their partners to be recognized, as Garon’s story demonstrates. But it was hugely meaningful in that the structure of power admitted openly that gay citizens exist, that we are part of what makes our nation what it is, and that it doesn’t make sense to treat us differently. And more and more often, when politicans continue to treat us as second-class citizens, it comes off as a gaffe. It’s the most dramatic with someone like Bob Garon, a gay veteran, because veterans inspire reverence and respect in a lot of people, and conservatives especially. But it’s not unique to people with military service — the more out we are, and the more able to be out we are, the more evident it will become that politicians aren’t denying rights to gays, but to schoolteachers and firefighters and volunteers in soup kitchens and parents and religious leaders. Because that’s who we are. And like Bob Garon says, what the hell is the difference?