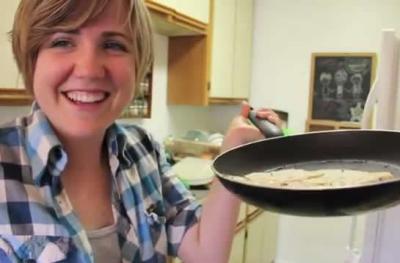 Hello again! If you felt cheated because your favorite inebriated internet lesbian chef Hannah Hart didn’t dedicate enough time to the elaborate art of making a quesadilla in her last video, you’re in luck because she’s back for another round. In her latest escapade that has indeed been out for several days, Harto seeks the answer to one of life’s greatest questions: What kind of tortilla is the best kind of tortilla? In order to approach this scientifically, Hannah is experimenting with all different kinds of tortillas, except for the low-carb kind because that’s inherently gross.

Her plaid is unbuttoned the whole time on this one, sidenote: