I was never a kid who went to camp. My parents were broke, and I wasn’t a fan of having to wake up early in the summertime anyway. But when my dad read about a brand new day camp, he clipped the article out of the local alternative weekly for me. Rock ‘n’ Roll Camp for Girls cost only $20 for the week, and he hoped it would inspire me to learn to play the used drums he had bought me a few weeks before to celebrate my eighth grade graduation.

I filled out the application, got my acceptance letter, and wrote the dates of the camp on my calendar in marker. At 14, I was a painfully shy and very insecure kid. I had few friends, thought I was hideous, and spent most of my time reading books, watching Buffy and listening to music. I wanted this camp to turn me into a rock star.

Now there are Rock ‘n’ Roll Camps for Girls all over the world, but the first one happened in the summer of 2001 in Portland, Oregon. I didn’t know that the camp would eventually have its own building, that the idea would spread all over, that there would be a documentary and all sorts of press for years to come. I just really hoped I would fit in and also learn to play the drums.

I quickly figured out this wasn’t a place where I had to worry about fitting in — everyone accepted each other. There were girls who were dressed punk, and girls who looked like they were the popular girls at their schools, in Gap and Abercrombie, and girls who looked like they didn’t care about clothes at all. Weirdly enough, clothes didn’t end up defining who hung out with whom. It wasn’t like anything I had ever experienced. I had discussions with counselors — all volunteers, mostly in their twenties — about feminist issues and they talked to me like I was smart and what I had to say was interesting. Most of the girls were learning new things and taking risks and we were all working together because at the end of the week we would be on stage at the showcase. We were also all working together to figure out what room we were supposed to be in — the first year of camp took place on a huge college campus and everyone was constantly getting lost. There was no time to tear each other down. 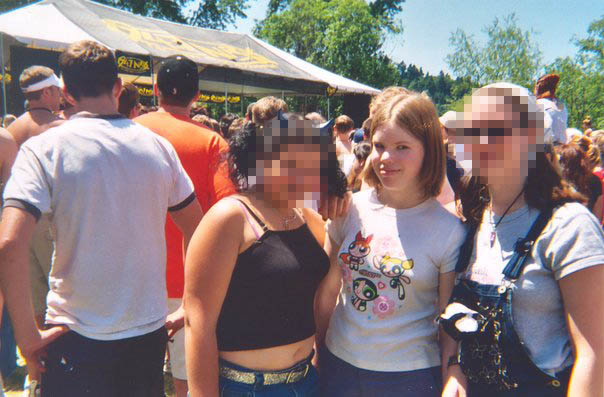 I learned about zines from Nicole Georges, I learned about fat-positivity from Nomy Lamm, I discovered riot grrl music years after it happened but at the exact time I really needed it in my life. There was a self-defense class that made me feel like I could be physically powerful, which was not a feeling I had experienced before. We stood in a circle and took turns screaming and I discovered how loud my voice could be. I got to know adult women — musicians and camp volunteers — who were awesome because of who they were and what they did, not because of how skinny they were or because boys liked them. For the first time in my life, I had actual role models. 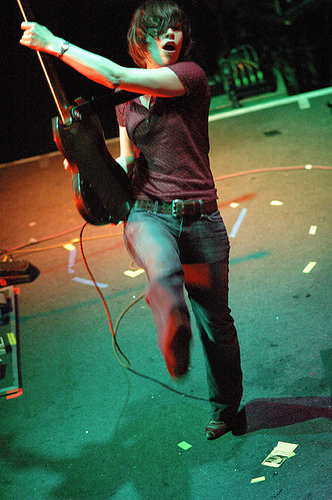 In the fall I started high school. I was still shy, but I was excited about playing my drums. I listened to Sleater-Kinney CDs in my bedroom nonstop. I spent a lot of time thinking about Carrie Brownstein. A lot of time.

The next summer, I went back to camp. It was even better than the last year. It was held in a small building they rented, instead of in random rooms all over a college campus. It felt organized, like a real summer camp instead of a class project. Everyone being in such close quarters inspired more socializing and spontaneity, like impromptu lunchtime dance parties in the yard to Le Tigre songs. As Rock ‘n’ Roll Camp for Girls grew up, I was doing some growing too. My shyness was slowly fading. I was excited instead of terrified about the showcase, and it was easier to make new friends.

This was the year when I started to realize a lot of the camp volunteers were probably not straight. It was also the year I started thinking more and more about how I might not be either. It didn’t seem as scary anymore. Near the end of the week, I was chatting with a friend I had gotten close to the year before, who was also learning drums. She was older and wiser than me and I was amazed that she wanted to be my friend.

“Umm I really like Rachel, she’s so nice. But I think Jordan is the cutest,” I said, feeling like it was a very daring thing to say. Jordan looked like a tiny butch elf. I had listened to her band’s music and it just sounded like noise to me but there was something about her that I liked.

“Jordan is really cute,” she said.

“Yeah,” I said, feeling more confident. “I have a crush on her. I’m bisexual.”

That was the first time I came out to anyone, and it was pretty amazing to do it in an environment where I knew no one would judge me. Not that I made a general camp announcement or anything, but I could have, and it would have been fine. I felt lighter. The whole world just seemed less frightening.

That week Sleater-Kinney played a benefit show for the camp and I was invited to dance on stage along with some other girls. OK, so I was too shy to actually dance on stage. I just stood there. But it was still amazing. 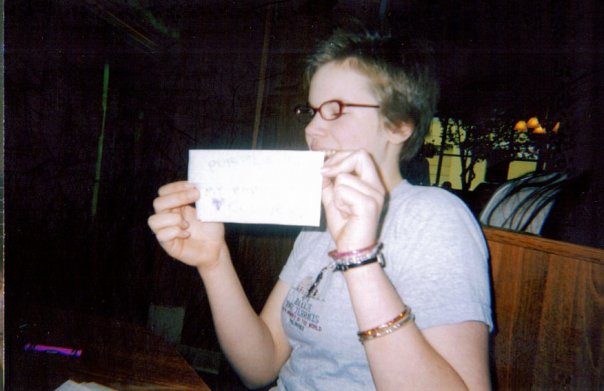 brave enough for a dykey haircut at 15

The third year I went to camp, I was about to turn 16. Rock ‘n’ Roll Camp for Girls finally had its very own building instead of a borrowed space. I had survived two years of high school. I was still shy, but I had an inner confidence that I didn’t have before. I was starting to accept my body for what it was, with the help of so many talks about body image at camp. I was beginning to suspect that maybe, in a post-high school world, being queer would actually make me cooler instead of making me feel like more of an outsider. I got to have a conversation with Carrie Brownstein and I tried to be chill about it even though all I was thinking was, I want a girl like this to be my girlfriend. (Carrie, if you’re reading this, I’m 24 now so it’s not creepy if you want to hang out sometime.) I decided to branch out from the drums—I had been taking lessons for a while anyway—and learned to DJ instead.

I really want to live in a reality where every girl has the opportunity to go to a Rock ‘n’ Roll Camp for Girls, or at least has an experience where she feels completely accepted, has positive role models and gets to meet Carrie Brownstein. Sometimes I try to imagine an alternate reality where I never went to camp, and I see a life full of crash diets, being afraid to leave my apartment and hating my queer self. Maybe that’s an exaggeration, and I could have figured things out on my own eventually, but I know Rock ‘n’ Roll Camp for Girls had a huge impact on who I am today. As an adult I’ve volunteered and given money, and I tell every girl I meet she should go. I figure it’s an investment in the future, because of course I want a future where all women are strong and confident and know how to rock out, or at least scream really loud.

this post is part of our extended coverage of rock n' roll camp for girls!

Alanna Maeve has written 3 articles for us.