This is our second post about the Willie Mae Rock Camp for Girls. To read all our “On Camp” posts, click this image:

I went to college thinking I’d be an environmental scientist, but by the spring I’d switched majors to communications and was quietly revisiting old dreams of being artist and working with musicians. I’d been running off to New York on the weekends, going to shows and just walking around, taking pictures, when a tuition refund of $3,000 turned my life around. It was more money than I’d ever had or even thought I’d have, and the possibilities seemed endless! Suddenly, this city I’d been pining for — that life — could actually be mine. In the span of a few days I found a sublet in a collective in New York City and filled out a form online for my one planned responsibility for the summer: Willie Mae Rock Camp for Girls. I’d kept WMRC in my heart since stumbling across it when I was 17, and now I was going, for real. 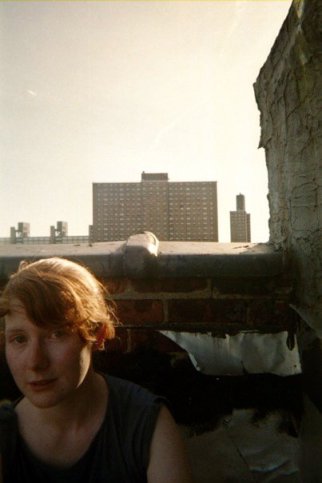 A couple months later, I was navigating New York like a pro — reading in the park, finding odd jobs on CL and going to bars that served free food. But I didn’t really have many friends, thanks to a shyness that I couldn’t seem to shake, despite the young confidence I had backpacks full of at the time. I didn’t know where all the people like me were, or how I would even talk to them if I saw one in the wild.

All of that changed during the training session for first-time Rock Camp volunteers. We stuffed into a small high school cafeteria and started learning what camp meant. It was more progressive, more in-tune and more supportive than I thought possible. Everyone, myself included, was so enthusiastic, and it felt so much easier to interact in that air. There was direction. I was quiet, but instead of ignoring me, the people around me made an effort to include me and ask me what I thought. These were my people — these women with books in their purses, smiling queers and confident ones who raised their hands to clarify the meaning of “people first language.” We talked about intentional safe space, and what it meant to build that with bare hands. It was a day that crackled and buzzed with revelations and language and feelings. It was a primer for the shock of rock camp.

My life was so changed by Willie Mae Rock Camp for Girls that in memory, I exist “before camp” and “after camp.” I’d been in spaces labeled “safe” before, but nothing compared to WMRC. The environment of camp gave me the most effective model for forging affirming and supportive spaces within my own life.

One of the most mindblowing facts about the Rock Camps across the world is that their summer programs are staffed almost entirely by unpaid volunteers. (Just kidding, we’re actually paid in burritos, Luna bars and happiness.) We do almost every job at camp — from working the kitchen to wrangling kids — and even though the camps are music based, no music experience is required to volunteer. From the first year I was there, I realized that Rock Camp was like a secret world where suddenly everyone I interacted with had good taste in music and a cool bookshelf at home, also probably a pet with a funny name. Their ‘day jobs’ were just as awesome as they were: social workers, badass zinesters, incredible nannies, award-winning writers and journalists, groundbreaking artists and of course, musicians. I mean, these are the people who change the world.

Here’s a list of bands with members who volunteer at Willie Mae Rock Camp in NYC!

Slothrust is a NYC-based blues-influenced grunge band made up of WMRC volunteer Leah Wellbaum and bandmates Kyle Bann and Will Gorin. The three graduated from Sarah Lawrence with Jazz and Blues degrees. With their irresistible punchy momentum and undeniable technical precision, Slothrust updates grunge to a new territory without giving up any lo-fi ground. They’re currently booking a national tour so keep on the look out for a show in your area! For those in NYC, they play Glasslands on May 10. 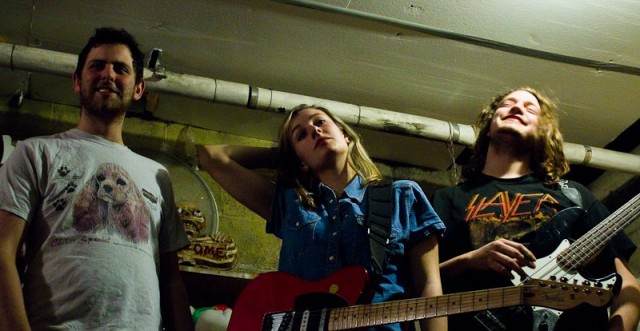 Sabrina Chap has the voice of a “whiskey angel”, an apt description of her soulful, playful powerhouse of a voice. She has volunteered at Willie Mae Rock Camp for Girls for three years and performed at the Girls Rock! Chicago. Her newest album, We Are the Parade, is described as a “queertastic horn explosion” and that sounds really exciting. Sabrina is also the editor of the Lambda-nominated compilation Live Through This: On Creativity and Self Destruction, which features many people loved by Autostraddle, including Sara Quin, Eileen Miles and (rock camp volunteer!) Cristy Road. The book is going into its second edition and adding pieces by Margaret Cho and Amanda Palmer and other people you might care about.

k. is the music project of Karla Schickele. Karla is the Executive Director of Willie Mae Rock Camp and a former volunteer of the Portland’s Rock ‘N’ Roll Camp for Girls. Her band mates, Ruth Lockwood and Matt Sutton are rock camp veterans, too. The music of k. shines with calm and confident melodies ridden by the purity of Karla’s haunting alto. The sparse but insistent percussion creates the perfect backdrop to their album History Grows, bringing the multi-instrumental talents of the trio to the forefront. They’re releasing a new album in May! For those in the NYC area, k, is having a record release show at Zebulon May 12 and you should go. 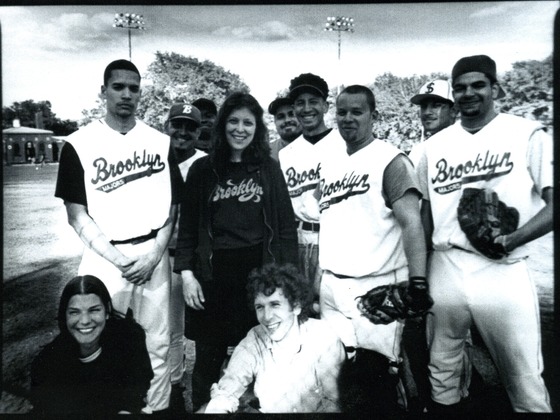 We’ve featured Clinical Trials in the past and band members Somer Bingham and Caryn Havlik are familiar faces at WMRC. Both also have the stage energy of legends and really endearing smiles. Crystal described their latest album Bleed Me as “a panther; it’s a little dark and dangerous, it stalks and menaces and makes my heart thump that tiny bit faster” and there aren’t words better than that. You can catch Somer on the upcoming season of The Real L Word!

Starina is a Chicago native who has volunteered as a band coach and guitar teacher at WMRC for two summers, currently works as part of the year-round Music Lab after-school program, and previously volunteered at Girls Rock! Chicago. Her album The Snow Years comes out on July 1, 2012 and she plays a free show at Pete’s Candy Store on May 19th. 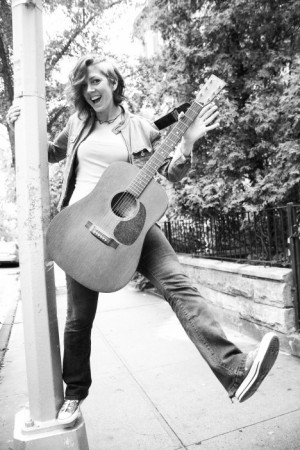 The Shondes have gotten a lot of attention— from VH1’s Best Week Ever Blog to Pitchfork and Entertainment Weekly, who called them “giddy garage melodics with Sleater-Kinney twist”. The Shondes played a lunchtime showcase at WMRC this summer and their guitarist Fureigh has volunteered as a guitar teacher since 2006. They played a bunch of shows at SXSW this year, and they’re heading off to their first European tour this year. They’re currently on tour in the US to promote their album Searchlights, check their Facebook to see if they’re coming to your area, they’re not to be missed.

Naomi Less is a Jewish rock musician and writes for pre-teens, teens and adults. In addition to volunteering at WMRC every year, she has a unique project called Jewish Chicks Rock, doing music workshops with girls at camps and in schools. She wants to inspire more girls to pick up instruments and express themselves.

Keyke is a singer-songwriter and a vocal standout. Her urgent twang and simple inspired lyrics developed through an uncommon writing style. She improvises all her music and transcribes herself later. She has a lot of stories and a cat named Juniper.

Jane Lee Hooker’s name is a twist on John Lee Hooker, the blues legend who is one of their influences. Another is Big Mama Thornton, who Willie Mae Rock Camp is named after. Their drummer and rock camp drum teacher, Melissa, was picked for the band before finishing her audition. All five members are mad talented ladies with stage names like “T Bone” and “Hail Mary”. Between the five of them they’ve had about 100 years of experience touring in the US and abroad. They play rad rock covers of blues songs. 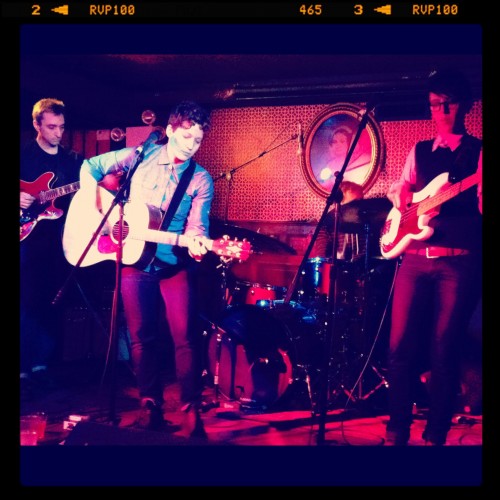 Glass Anchors is the band of WMRC volunteer Annie Sicherman (and currently features another rock camp volunteer on bass!). Her music is crafted to break your heart in a good way; Annie’s velvety voice coaxes the pieces back together. Glass Anchors is signed to Cakeshop’s in-house label Capeshok.

Volunteers Relevant To Your Intersts Playlist

Rock Camp from Autostraddle on 8tracks.

Volunteering is such a great way to experience camp as an adult. Find your local Rock Camp and see what you can do! Share your own Rock Camp volunteering stories in the comments, and if you’ve been as a camper, tell us about your awesome volunteers!

click for more of our extended coverage of rock n' roll camp for girls!