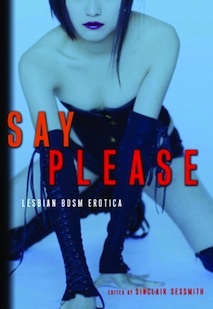 Contributors include Rachel Kramer Bussel, Sossity Chiricuzio, Kiki Delovely, Dusty Horn, Sassafras Lowrey, Miriam Zoila Pérez, and Xan West, along with other well-known and debut writers. In Rachel Kramer Bussel’s “A Slap in the Face,” a femme wants her girlfriend to slap her in a crowded bar. In Dilo Keith‘s “Coming of Age,” an almost-butch top delivers a birthday spanking. In D.L. King‘s “A Public Spectacle,” a couple plays, surrounded by unseen watchers.

Many of the stories feature psychological elements, or show what it’s like to enter a headspace, as in Gigi Frost‘s “Housewife”:

“‘Hi, honey.’ She takes the drink, cups my face with her other hand for a kiss. ‘How’s my beautiful wife?’

‘I, um. Why don’t I take your bag and you can have your drink in the living room while I finish dinner?’

‘It’s not ready?’ Her face is taking on a dark expression, clouding over the jovial-husband act. But underneath all that is a wisp of a smile. I have to be careful not to laugh. The whole thing is so scripted, so trite. But these tired lines are a key to our desire, another path to having each other in exactly the way we need.”

While others take a different approach, as in Dusty Horn‘s “Spanking Booth”:

“I will spank anyone who wants a spanking from me. But it takes the right kind of ass for me to enjoy myself, to awaken the sadist in me.

This is editor Sinclair Sexsmith’s first solo collection (Sinclair edited Best Lesbian Erotica 2012 with Kathleen Warnock). You might be familiar with Sinclair Sexsmith from Sugarbutch, where Sinclair has written about “the sex, gender, and relationship adventures of a kinky queer butch top” for the past six years, or from contributions to anthologies like Persistence: All Ways Butch and Femme, Visible: A Femmethology Volume II, Sometimes She Lets Me: Best Butch/Femme Erotica, Best Lesbian Erotica 2011, 2009, 2007, and 2006, and in SexIs Magazine.

I emailed with Sinclair while they were away at a conference in San Francisco last weekend and answering questions via iPad.

Say Please is the first erotica anthology you’ve been the sole editor on. What was that like? What was the selection process like? How did it compare to working on Best Lesbian Erotica 2012?

Being a guest editor for Best Lesbian Erotica meant that I selected the stories from the finalists that Kathleen Warnock, the series editor, sent me, and I wrote the introduction. I was thrilled to do that since I’ve been a BLE reader since 1997 and have been submitting stories since 2005, and regardless of my participation or not, I always look forward to the release of this year’s edition, I think the series often holds some of the newcomers to writing lesbian erotica and it’s a thrill to get to know what’s new in that world. Say Please was completely different — I worked the concept out with Cleis Press, came up with a description, read tons of erotica to try to figure out what types of stories I was looking for, and then read the 100+ submissions that came across my desk. It was quite thrilling to do the selection process, actually — I thought it would be tedious but I enjoyed it so much. Even if the story didn’t fit for this anthology, I liked reading each one and considering how to construct a narrative through an anthology with multiple voices about the same subject, in this case the incredibly broad topic of “lesbian BDSM erotica.” The questions quickly became, what is BDSM? And what is lesbian? I’m not sure I know the answer in general, but I figured out a context for this anthology to be born into, some parameters about kinks and fetishes and gender.

I noticed that a really high proportion of the stories involve a butch top and femme bottom dynamic, that all but three stories use the word “cock,” and that there’s some stories where the characters identify as daddies as part of a power dynamic, all of which you often write about on your website. To what extent does the selection reflect your own tastes?

That said, though, I didn’t want the book to be exclusively about my personal tastes, and I made sure to include a wide variety of gender partnerships in various configurations of power, and lots of examples of fetishes and kink outside of just strap-ons. The thing about erotica anthologies is that my favorite story and my publisher’s favorite story and your favorite story are probably at least three different stories, and depending on the day it might be five different stories. Tastes in jerk off material vary widely. I was basing my decisions on the success of my own work and on what I know in the larger communities, and I hope very much that there will be a little something kinky for everyone.

Who is your ideal reader for Say Please?

Say Please includes some of your own writing, which also appears on Sugarbutch as well as in several other anthologies. How and why did you become a writer?

I’ve been a writer for as long as I can remember, storytelling and journalling since I was very young. But I wasn’t really “out” as a writer until I started getting involved in the spoken word scene in Seattle, mostly by taking classes at the Bent writing institute for queers, which, at the time, was focused on classes for folks who didn’t quite have their writers “sea legs” yet, still feeling unsure of our place in the world as a writer. That grew my writing practice immensely, and enabled me to seek an undergraduate degree in creative writing, which I’m not certain I would’ve done without the support and guidance at Bent. It remains true that I believe I learned more at Bent in five years than I did getting a BA at the University of Washington.

You’ve also written explicitly about your current and past relationships, as well as other parts of your life, on Sugarbutch. What is the most challenging part of writing about your sex life for you? Are there ever any places that you’re not willing to go, or are you able to get a lot of it out?

Sugarbutch has evolved constantly since I started it in 2006 — it’ll turn 6 years old in April. It used to be a place that I used to work out my evolving identities, like being kinky and being a butch, dating femmes and seeking a fulfilling relationship. As those things are much more stable than they used to be, it’s become a place where I attempt to converse with the queer readers that read my archives and are in their own stages of identity development, too, as well as a place where I continue to evolve my theories on butch and femme, kink, domination, relationships, and all sorts of things. There is still a component of it being a place where I work out new things, but as my readership has grown I’ve spent more time on themes and less time revealing the new and hard subjects that I’m working through in my life. For example, I’m just starting to write about opening up my relationship with my girlfriend Kristen. even though we’ve been working on that process for almost six months, I put off writing about it because it was so new and fragile that I didn’t want to open myself up to the vulnerabilities of putting it onto the Internet for general public scrutiny.

The most challenging part about writing about my sex life is that I often don’t get to choose who I reveal things to — much like being a visible queer who doesn’t get to choose when to come out, the readers chose me. There are lots of things I don’t write about, yeah, but I try to model my honest evolutions trying to live a kinky queer life, and while it’s rarely (never) perfect, it’s always the best I can do to explain myself and my situation at the time. I feel very lucky that any of it is useful to other people in their own evolutions, and I frequently invite folks to just take what they can, to adapt what works for them, and leave the rest behind. I’m only talking about what’s been best for me at the time, and it’s all subject to change.

One challenge for a lot of writers is just sitting down to write. What is your current working situation like? How do you get stuff done?

I write every day. I frequently write on deadlines and frequently have monthly or quarterly or yearly goals for Sugarbutch, so that helps me accomplish things and keep pushing myself forward. I live with my girlfriend and she has a day job, so I usually get up with her in the morning and work all day. I often meet up with friends who also work from home to have writing dates, and I try to set aside a certain amount of time daily for exploratory journalling or more creative pursuits, since it’s ever easy to get wrapped up in event promotion, marketing, pitches, emails, social media, and the rest of the business that is involved with being a writer. Some days that works better than others.

Where do you want to be more than anywhere?

Well, I’ve been on the road for the last five days, and returning home tonight, and I really miss my girlfriend, so if I could be anywhere physically I’d be at home in bed with her for at least a few hours on this lovely afternoon. Professionally, I’d like to be in a place where I could pause the hustle of the business side of my job for a few months and really focus on some deeper writing, maybe some longer works or maybe just delving much more into ideas that I have been kicking around but haven’t been able to sit down and get out on paper. That’d be such a luxury.