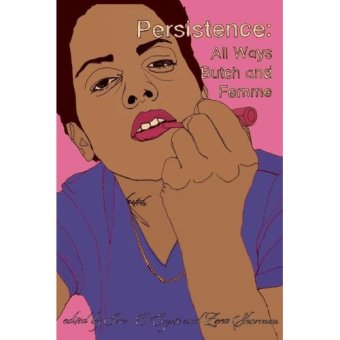 Are you in the right bathroom? Just kidding. GUESS WHAT weirdos, have I ever got some exciting news for you: Persistence: All Ways Butch and Femme is a new collection of essays exploring the funny, messy, confusing, contradictory, liberating, confining, wet wild ride of gender from a powerhouse cross-section of the queer world’s smartest and sexiest writers, poets, musicians, activists and scholars. Did you just get excited?

The book is edited by Ivan E. Coyote and Zena Sharman and is published by the very-dear-to-my-heart Arsenal Pulp Press in Vancouver. (Sidenote: to my delight, this book is SUPER Canadian. The majority of the contributers are Canadian, and all of the -ORs are -OURs. It may seem silly but since I’ve been living in the States, reading it like, relaxed my eyeballs or something. Love me some CANCON.)

In case you weren’t already familiar, Ivan E. Coyote is a Canadian writer, storyteller, musician and filmmaker hailing from the YUKON. (You may recall the Yukon from its mention in the Calvin and Hobbes classic Yukon Ho!. Generally speaking, the Yukon is a place that even hardcore winter-weathering Canadians consider to be actually too cold.) Ivan came and spoke in one of my university classes in Montreal once and was charming and witty and engaging and brilliant. Zena Sharman is a gender and health researcher and self-described “femme dynamo”; the pair’s introduction is a transcription of an extended chat session between them, which I thought was cute, and also set the tone for the book’s feeling of right-now-now relevance. Nicely played.

If you’re a gender wonk, then you may have noticed that the title is a nod to Joan Nestle‘s groundbreaking and now-classic 1992 collection, The Persistent Desire: A Butch-Femme Reader (check it out if you haven’t, Nestle notes that copies of the 1992 edition can still be found in used bookstores and any university library worth its salt should have it too). In fact, Nestle herself provides the foreword to Persistence, in which she insightfully discusses the historical and cultural context of Persistent Desire, the continuing evolution of the language of gender and identity, and the importance of continuing the discussion:

At seventy, I have looked into the future, I have heard the new-old cries of don’t box us in, don’t be sure of how all this is going to turn out, we will forge new liberations in a time of endless war, we will work toward social justice in this world, carrying these complex bodies of desire with us, as much acts of the imagination as flesh and bone. We have cast off the anchors.

The words butch and femme are pretty loaded for some people — which is good! The book is as much of a reclamation as it is an explosion of our understanding of and experiences with butch and femme identities. It includes essays that cherish and celebrate butch and femme as well as seek to critique, expand, and redefine these categories. Most importantly, it offers playful and unique insights into the complexities of our fierce (and fiercely-vulnerable) messy-perfect queer lives. This is The Way That We Live for real.

“The stories in these pages resist simple definitions. The people in these stories defy reductive stereotypes and inflexible categories. The pages in this book describe the lives of an incredible diversity of people whose hearts also pounded for some reason the first time they read or heard the word butch or femme. This books is a testament to the many beautiful ways butch and femme can be lived and embodied. It is our homage to the bodies that lived it before us, and it is our gift to those just discovering themselves.”

The list of contributers reads like the invite list to the greatest potluck ever: in addition to Coyote and Sharman, there’s friend-of-Autostraddle and beloved blogger Bevin Branlandingham of Queer Fat Femme, Canadian indie-folk countryboy Rae Spoon, author and activist Leah Lakshmi, poet and writer Zoe Whittall, trans activist and playhound S. Bear Bergman, one-woman-powerhouse Anna Camilleri (remember Taste This?), and on and on. It’s a bit daunting, actually. This collection is so packed full of writing (“a bit bloated” – Riese) that it’s almost overwhelming. Coyote and Sharman have done a good job, though, of putting cerebral academic entries beside the light and anecdotal, and it flows really nicely. It’s like a big gay all-you-can-eat buffet.

Most importantly, the writing is good! Most of it, anyway. And while I admittedly tend to get bored when I’m reading people talking about their own gender on and on, I found most of the essays really fascinating and engaging.

In “A Beautiful Creature,” Karleen Pendleton Jiménez recalls her experience of being butch and pregnant; Amber Dawn offers raw insight into the complicated experience of being a queer femme sex worker and its impact on her butch partners in “To All the Butches I Loved Between 1995 and 2005”; Rae Spoon laments his inability to chop wood effectively in “Femme Cowboy”; romham padraig gallacher reconciles trans and butch self-identities in “Home/Sickness: Self Diagnosis”; Bevin Branlandingham debunks the oft-ballyhooed “high maintenance” High Femme descriptor in “Rethinking High Maintenance: The Queer Fat Femme Guide to Not Blaming It on the Fact That You Don’t Like High Femmes,” and Leah Lakshmi rallies the troops in her brilliant “FEMME SHARK MANIFESTO”:

FEMME SHARKS AREN’T JUST DIMEPIECES AND TROPHY WIVES.
FUCK THAT!
WE MIGHT BE YOUR GIRL,
BUT WE’RE OUR OWN FEMMES.
WE RECOGNIZE THAT FEMMES ARE LEADERS OF OUR COMMUNITIES.
WE HOLD IT DOWN, CALM YOUR TEARS, ORGANIZE THE RALLY,
VISIT YOU IN JAIL, GET CHILDCARE HOOKED UP, LOAN YOU TWENTY DOLLARS.
FEMMES ARE WELDERS, AFTERSCHOOL TEACHERS, ABORTION
CLINIC WORKERS, STRIPPERS, WRITERS, FACTORY WORKERS,
MOMS, REVOLUTIONARIES DEDICATED TO TAKING THE SYSTEM
THE HELL DOWN SO WE CAN BE FREE!
…
WE’RE YOUR BEST GIRLFRIEND AND YOUR WORST
NIGHTMARE

It’s a must-have for the shelf of anyone who lives and loves and jams in this crazy world of mystical gendered bodies, and is a nice reminder that butch and femme are as past as they are present as they are future, and that there are as many ways to do masculinity and femininity and everything else as there are smart, freaky, quirky people walking around on this planet.