After I told Laneia I wanted to write about Sappho, she made sure to point out that I didn’t have to write about a lesbian. Which is really cute; I love how she was trying to let me fully showcase my heterosexuality or something.

Except I kinda only care about lesbian poets — Sappho, Eileen Myles, Adrienne Rich — I mean, what was I supposed to write about, “To His Coy Mistress,” or something? 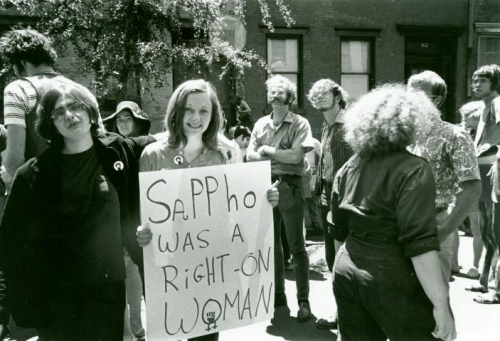 Anyway, my high school had this thing in the yearbook where seniors got a half-page for photos, quotes, whatever. So if you look at the Stevenson School’s 1995 senior pages, you’ll find a photo of me wearing a Heavens to Betsy shirt on the first day of senior year, a fragment from a Sonic Youth song (“angels are dreaming of you”–so Britney of me), and the lyrics to Beat Happening‘s “Indian Summer.” I was the kind of teenager who was really into the ephemerality of being a teenager. It’s not like I wasn’t miserable and bored, I was just a little in love with the idea of teenagehood being this short, idealized moment. Obviously I topped it all off with a poem by Sappho.

I had read The Secret History during a particularly impressionable time and had this general obsession with The Classic World. I also spent a lot of time hanging out at a local women’s bookstore called Herland (I know: AMAZING, I’m so sad I don’t have the purple Herland tee with their kind of tree of life/Gaia logo on it anymore) and might have gotten into Sappho that way. Regardless, it remains the only poem I know by heart:

I’m probably getting the line breaks wrong and maybe even misquoting it. I would google it but I like the version in my head, so just go with it. It’s perfect, you know? Nostalgic and a little romantic. It spoke both to my desire to leave a mark but also to be cool and self-conscious enough to be a little removed from showing that I cared. I also like that it doesn’t rhyme. It’s easy to memorize and it has a certain topical flexibility, so you can recite it to someone in bed but also during a crucial pep talk.

Marisa Meltzer is the author of How Sassy Changed my Life and Girl Power: The Nineties Revolution in Music. This is her tumblr.

Marisa has written 1 article for us.