Remember the time Lori Lindsey came out on Autostraddle, A Camp 2.0 was only a few days away and we reached our new fundraising goal of $100K? That time is now, chiclets! Not to mention that Pinoe is tweeting about us, Tinkerbell will soon be branded on Alex’s ass and a music video by the whole team is happening. Yeah, NBD.

Other highlights from this week include an Atlanta city guide, Katrina’s pop up barbershop, calendar girl Taylor and of course, Buffy. We also served up a boatload of advice for surviving and thriving at wedding events, added to your reading list and made some plum cake. And did you catch Rachel’s brilliant recap of the RNC? And Michelle Obama’s drop the mic speech at the DNC? We’re really doing our best to help you survive election season. Meanwhile, Riese barely survived another episode of TRLW and no one knows who will survive the rest of the season on Pretty Little Liars. Like always, TIRTIL, A.A.A., NSFW Sunday and Sunday Funday came along for the ride. But enough about us, let’s talk about you!

On Lori Lindsey: The Coming Out Interview:

The Mom of the Year Award to debbie shipley:

On Super Gay Things Coming Soon To A Silver Screen Near You:

The Biblically Inaccurate Award to Alice: “Not everyone thinks of Joan of Arc as gay… My friend Laura’s sister thought that she was “Noah’s wife”…”

On DIY Kitchen Composting Bin: For the Karma Of The Thing:

The This Charcoal Filter Saved My Relationship Award to sallysue: “This is so perfect. I was literally just googling “how to make your own compost bin” today. Because my girlfriend saw the naked pile of corn husks and eggshells in the yard and almost called our landlord to evict me.”

The Probably Not As Cute As Mini Horses Award to Sally and dc: 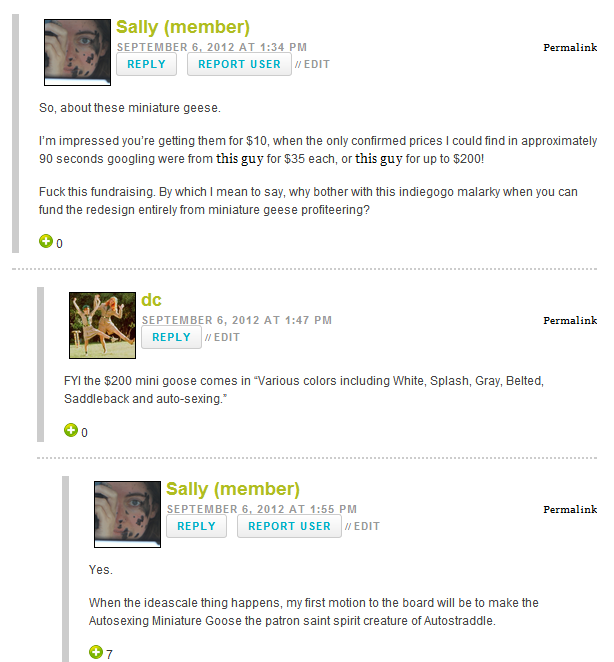 The We Owe You A Sweet Sixteen Party Award to Elinor: “goddammit, you might as well have another $100. what’s another third of my savings gone? i was only going to donate another fifty, but then the cookies were sold out, and it’s my sixteenth birthday in four days, and i realised i could potentially be getting a late birthday card from autostraddle, so i waved goodbye to another month’s pay. i think this is the most i’ve spent on anything ever, to be honest. I JUST LOVE AUTOSTRADDLE SO MUCH OKAY”

The We Owe You Rent Money Award to Kait: “It’s official. My entire first post-college paycheck has gone to getting to/paying for A-Camp and supporting the site. <3”

The Comic Award to Diana: