The LGBT Caucus has had two meetings at the Democratic National Convention in Charlotte this week. There are an amazing 550 LGBT delegates, alternates and convention committee members at this year’s DNC. For the first time, there is at least one LGBT delegate from every state. Obviously, the time of LGBT influence is now.

A press release from the DNC LGBT Specialty Media Liaisons outlines the list of speakers and presenters at Tuesday’s meeting, including Alejandra Salinas, the President of College Democrats who will be speaking during Prime Time tonight. Also on the list are Valerie Jarrett, the Senior Advisor to Obama and Assistant to Obama for Public Engagement and Intergovernmental Affairs, Rick Stafford, the Chair of DNC LGBT Caucus, Babs Saperstein, a representative for transgender equality, and of course, Tammy Baldwin, Congresswoman and Senate Candidate for Wisconsin. 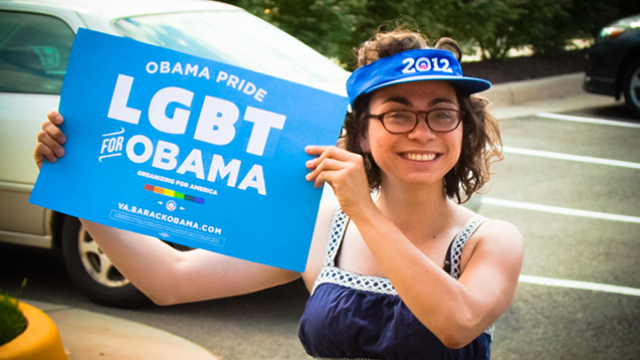 The Democratic Party Platform, which was approved on Tuesday by the DNC, has many progressive LGBT policies including:

“We support the right of all families to have equal respect, responsibilities, and protections under the law. We support marriage equality and support the movement to secure equal treatment under law for same-sex couples… We oppose discriminatory federal and state constitutional amendments and other attempts to deny equal protection of the laws to committed same-sex couples who seek the same respect and responsibilities as other married couples. We support the full repeal of the so-called Defense of Marriage Act and the passage of the Respect for Marriage Act… We know that putting America back to work is Job One, and we are committed to ensuring Americans do not face employment discrimination. We support the Employment Non-Discrimination Act because people should not be fired based on their sexual orientation or gender identity.”

Sounds a lot better to me than that other party’s pretty anti-gay platform, right? 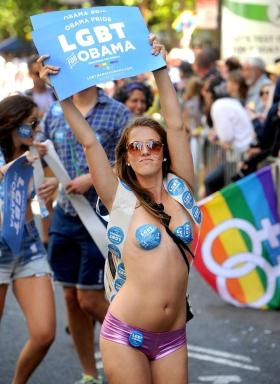 This is some intense candidate commitment.
via {SFGate}

Huffington Post is calling the LGBT Caucus meetings the “happiest caucus of all” because we’re gay, get it? Well, that and people are excited to be at the Caucus meetings. Sally Phillips, a lesbian delegate from Florida, said, “We’ve got a lot to celebrate. I mean, my gosh, I was a delegate in 2008 and we had a hard time filling the room up. And look at it now… I mean, I just got chills.”

At today’s meeting, openly gay Congressman Barney Frank stirred up a bit of an uproar when he accused the Log Cabin Republicans of “[modelling] themselves after ‘Uncle Tom’.” Uncle Tom, the title character of Harriet Beecher Stowe’s Uncle Tom’s Cabin has become a “pejorative term used to describe members of a minority group seen as helping in their group’s oppression.” Ouch. Chad Griffin of the Human Right’s Campaign even thought it was a bit harsh, claiming that the Log Cabin Republicans are “good people doing good work.” Almost every major LGBT organization is attempting to distance themselves from the comment, saying Barney Frank’s opinion is his own. 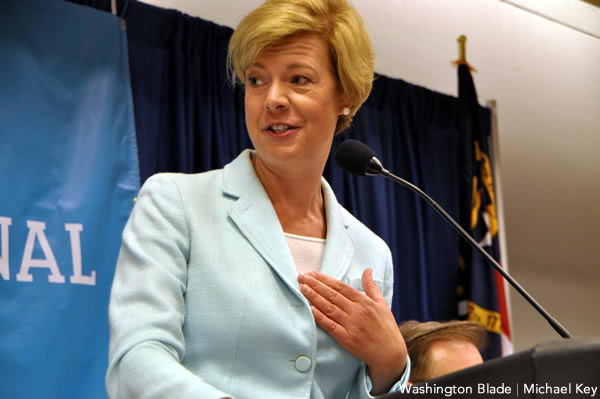 via {Washington Blade by Michael Key}

Positive changes could happen for the LGBT community across the country in this election. Tammy Baldwin is expected to campaign with Obama through the election season, and might I remind you that if she’s elected, she will be the first openly gay Senator elected to Congress? Of moving forward with equality, both marital and in the overall human rights areas, she said,

“I do know in terms of the issue and how we’re moving — just like we’ve seen the president evolve — we heard him talk about what it took to change his heart and move him… We are seeing that across this country. They estimate… that two percent of Americans changed their views on marriage equality. We know that had the amendment come up in Wisconsin this year, or next election cycle, it would have had a different outcome. And I think that’s also going to happen in North Carolina and elsewhere in the country. We’ve got to keep working. We’ve got to keep educating.”