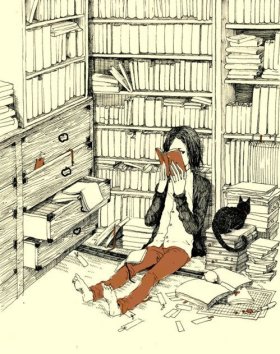 HELLO and welcome to the 41st installment of Things I Read That I Love, wherein I share with you some of the longer-form journalism/essays I’ve read recently so that you can read them too and we can all know more about this guy Lena Dunham dated! This “column” is less feminist/queer focused than the rest of the site because when something is feminist/queer focused, I put it on the rest of the site. Here is where the other things are.

First Love (August 2012), by Lena Dunham for The New Yorker – “My relationship with Noah had, I realized, ended two years before, to the day—on August 17, 2008—after a year and a half of dating that felt like fifty. The emotional acrobatics involved turned my heart into a hardened little gymnast with tiny tits and a leotard wedgie.”

Punk Rock Fight Club (August 2007), by Mark Binelli for Rolling Stone – About the hardcore punk music scene and the “Friends Stand United” aka “Fuck Shit Up” gang that has thrived within that subculture and was implicated in the murder of James Morrison in 2006 as well as many other violent crimes.

Didn’t Anyone Tell You (Fall 2012), by Eileen Pollack for Plougshares – “I made it to my parents’ house without further mishap and spent the next few weeks recuperating. I wanted to tell my mother about all the terrible things that had happened to me, but our unspoken agreement was that she and my father wouldn’t ask why I had quit my job, why I had traveled to Los Alamos, why I had returned by bus weeks earlier than I had said I would be arriving, and I, in turn, wouldn’t volunteer the information. Why bring any of it up? All they would say is: Didn’t we tell you this is what happens to young women who insist on living on their own?”

Please God Stop The Rain (August 2012), by Josh Dean for New York Magazine – A play-by-play from residents who survived the flood that drowned Pratsville, New York, last year. I think the scariest part of these kinds of stories are that they’ve all got that one part where the person thinks it’s NBD and just goes to the second floor of their house and then their house breaks off its foundation. You know, lines like, “Pam Young lost track of how many times she thought her life was over.”

The EST In Me, by Elizabeth Kadetsky for Guernica – “The superficial can also go deep, though. Fashion is a costume, but if you wear it long enough, you can really become that thing. Did we change deeply? I think we did. My mother never got back the New England accent she’d once worked so hard to get rid of, and she also deeply internalized Erhard’s message.”

In Which We Copy It Down In Their Handwriting, by Elena Schilder for This Recording – Part of a great series on This Recording looking back on favorite books from childhood. This one’s about The Baby-Sitters Club!

Manufacturing Taste, by Sasha Chapman for The Walrus – “Tell me what you think of Kraft Dinner, and I will tell you who you are… KD is the ultimate nursery food, at least if you were born and raised in Canada, where making and eating cheese has been a part of the culture since Champlain brought cows from Normandy in the early 1600s — a tradition nearly as venerable as the fur trade. It may be the first dish children and un-nested students learn to make (“make,” of course, being a loose term; “assemble” may be more accurate). This only strengthens its primal attractions.”

Eddie is Gone, by Nicole Pasuka for The Believer – The “whitewashed version” of Hawaii sold to tourists ignores the history of native peoples exploited and displaced by white colonialists. In this piece, Pasuka uses the story of Eddie Aikau to explore these differences, subtitled “THE LIFE AND DEATH OF SURF LEGEND EDDIE AIKAU TELLS A HAWAIIAN STORY NOT FOUND IN MOST GUIDEBOOKS”

Cape Fear (December 2011), by Ben Shattuck for The Morning News – “A small portion of the Massachusetts coastline is home to America’s biggest witch-hunt, a history of savage wife mobs, the occasional 400 percent increase of unlucky pregnancies, and the world’s largest deposits of black crystals.”