Hey friends. This week’s edition of the comment awards is brought to you by kibble and dog hair because I’m house- and dog-sitting for my friend while she’s on vacation. So far it’s going swimmingly. As in, swimming in the water from when the toilet overflowed yesterday and the dog tracked it all over the house. Luckily, I have also of you crazy people here to keep me sane. This week, it was everyone’s birthday, Taylor ask for and received an apology from Gary Shapiro, and Whitney wrote an open letter to Margaret Cho. Carolyn made zucchini, rasin, and pine nut salad, I made spinach ravioli, and Riese made another list of things she read and loved. Pariah is coming to a city near you and we got answers to 5 of your questions. Finally, we’ve got a Golden Globes liveblog, Lizz’s Pretty Little Liars fashioncap, and the newest episode of In Your Box Office: The Girl With the Dragon Tattoo.

On Young Homeless Lesbian Included On List of 100 Most Powerless New Yorkers:

The Horses are People Too Award to yodelmachine: “horses can be lesbians too”

The OhMiJBeibs Award to Dina: 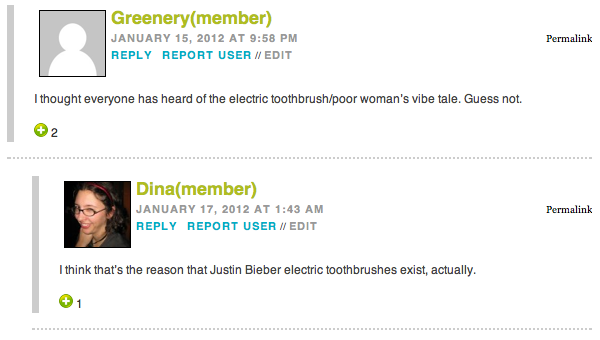 The Follow Through! Award to chrissie riot: “oh god the whole l word theme can be sung to my favorite things. riese what did you just do!?”

The Doesn’t Your Teacher Know That Lesbian Sex Isn’t “Real” Sex? Award to Kate B: “As someone who recently finished high school sex ed, I almost got failed for answering the question “What is the only 100% way to not get pregnant” by saying “Have sex with girls!”
This would have made that whole thing a lot awesomer, and I hope my kids get to have something like this.”

On Listling Of Commentary: Shit Taylor Swift Fans Say To Me:

The First Of All Award to alicee: 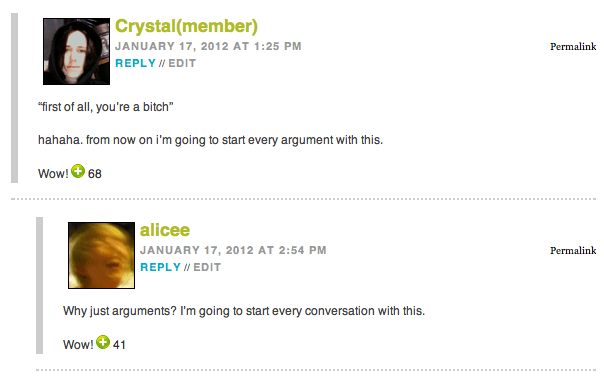 The Sexy! Award to Lex: 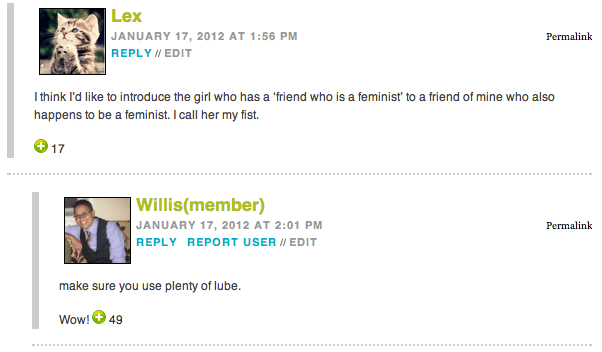 The If I Knew Any Taylor Swift Awards I’d Have A Better Name For This Award to Digger: “I’ve decided to compose my comment from Taylor Swift song titles: Riese, it’s clear by this follow-up that “Youre Not Sorry” about the first article..And unlike these commenters who will clearly “Never Grow Up”, I don’t think you’re “Mean”..I think you’re “Fearless”..This post is “Better Than Revenge”..It left me “Breathless”…I wish someone could “Tell Me Why” Taylor Swift has such a rabid following..Please if you can, “Speak Now”..Maybe I don’t get it because I’m not “Fifteen”..But I feel like I’m on “The Outside” on this one..But thanks to this post, “Today Was A Fairytale”..No..really..It was “The Best Day”..You helped remind me that those of us who don’t share their Taylor Swift “Love Story” still have “A Place In This World”..So Riese, don’t ever “Change”..Even as the Taylor fans get “Crazier”..You “Stay Beautiful” and know this comment was “Tied Together With A Smile”!”

On Ms. Brown Dubbed a Feminist Based on Laurel Thatcher Ulrich Quote:

The Taste The Rainbow Award to Mollie: “Whatever their personalities, I like all of them equally in my belly. Equality, there ya go.”

On “Real L Word” Gets a GLAAD Nod and Gaga Starts “Born This Way” Foundation:

The Command + R Award to novastar: “Let’s hold 72 minutes of silence for Megaupload.”