Thank you for writing your blog post, “Being Mad on Twitter.” When first I read it, I felt angry — angry for all of the times I had been made fun of because of my body and didn’t feel like I could say anything back. Angry that I felt like I didn’t matter enough to fight back. Angry because of all of the times I believed the nasty comments were right. And thank you again, because you’re fighting for my body, too. 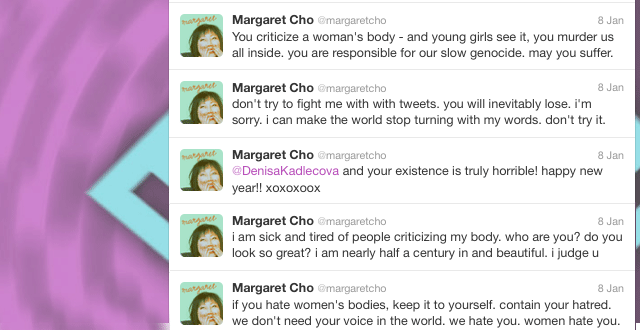 When you posted a picture of your newest ass tattoos on Twitter a few days ago, you got about 11 million awesome comments and two nasty comments from idiots who are obviously out there to troll the Twitter-verse. You rightfully “blew a fucking gasket” over the negative comments that criticized and devalued your body. Next? You “screamed out loud” and then sat down and wrote a blog post about the whole ordeal. I love you for writing the post, and it’s everything that I needed (and a lot of people needed) to hear.

Why? Because you responded to the trolls. Because you’re fighting for everyone who’s ever been told that they don’t matter based on some illogical ideal that is so often not-Asian and not-fat and not-every-adjective-you-can-think-of. And I’m glad you’re fighting back.

I’m glad you’re flying your “flag of self esteem for all those who have been told they were ugly and fat and hurt and shamed and violated and abused for the way they look and told time and time again that they were ‘different’ and therefore unlovable.”

I’m glad you’re telling your readers, “Come to me and I will tell you and show you how beautiful and loved you are and you will see it and feel it and know it and then look in the mirror and truly believe it.”

Being called ugly and fat and disgusting to look at from the time I could barely understand what the words meant has scarred me so deep inside that I have learned to hunt, stalk, claim, own and defend my own loveliness and my image of myself as stunningly gorgeous with a ruthlessness and a defensiveness that I fear for anyone who casually or jokingly questions it, as my anger and rage combined with my intense and fearsome command of words create insults meant to maim, kill and destroy.

Why am I glad? Because we don’t hear this enough. 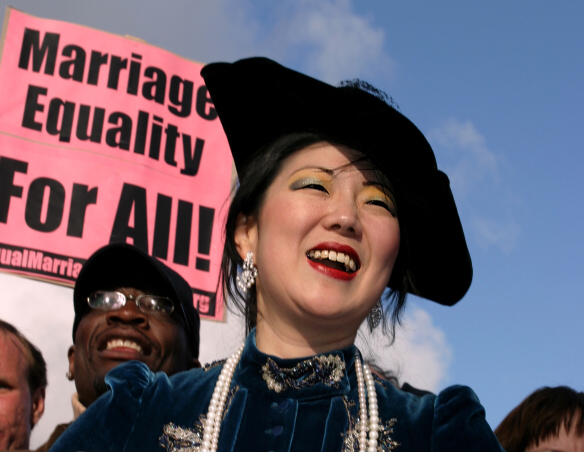 While one fan objected to your response to the trolls, saying that your strong “‘language’ was too much” and that you “had ‘lost a fan'” because of this language, this whole thing isn’t about language at all. It’s about bodies and self-esteem. It’s about not saying something those fifteen times we consider whether we should yell “fat-ass” back before we silently turn around and walk away. And you made the case for your rage so eloquently, because it is not about language but about being angry and letting yourself feel entitled enough to be angry back.

It’s that sense of entitlement to say something, to know that our bodies belong to us, that you are fighting for here. And for all of the bullying and hurt you’ve gone through and all of the times people and companies like ABC have told you your body isn’t “right” enough, there’s an angry and hurt and powerless child who’s been told she’s not “right” enough too.

And by speaking up you’re speaking to all of the kids who are and have been: You are right enough and important enough to fight back. Everyone should have the choice to fight back if they want to. Our hurt and anger don’t need to be justified — we deserve to be heard. As you wrote,

My mouth and mind and typing fingers are weapons of mass destruction and I pity those ignorant idiots who would leave insults about mine or any women’s bodies in comment boxes … I’d like to say things that would haunt them for the rest of their days, because their hideous words stay with me eternally. Their insipid spouts of “no fat chicks” are branded onto my soul, so they must reap what they sow. If I am in my worst way and I talk to you, you will know you have been talked to. 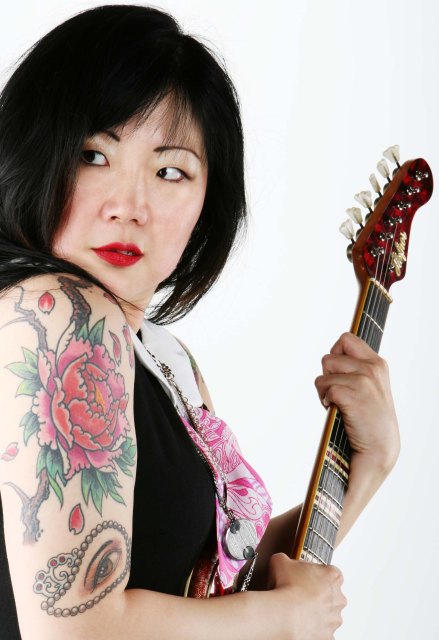 We have words and the impact of these words matter more than the negative repercussions of fighting back. Because in a world where we are made to feel like our curvy, round, shapely, fat, scarred, queer, skinny, race-laced bodies are tiny and insignificant, we feel like we barely take up any space. We feel like fighting words will only make our bodies’ space bigger and more unsightly. But tattooed asses and arms and purple and white stretch marks and bellies and bones and all are worth fighting for.

And for this reason it hits me hard when you write,

I want to defend the children that we still are inside, the fragile sensitive souls who no matter how much we tried were still told we were not good enough. I want to make the world safe and better and happy for us. We deserve beauty, love, respect, admiration, kindness and compassion. If we don’t get it, there will be hell to pay. I am no saint, but I am here for you and me. I am here for us, and I am doing the best I can.

We are all still those children who felt like we didn’t deserve the love that our bodies gave to us. We are all deserving of the respect and love we feel free to give to others but not keep for ourselves. We are all entitled to the voice that knows it’s good enough to fight back.

Thank you Margaret Cho, for doing the best you can.