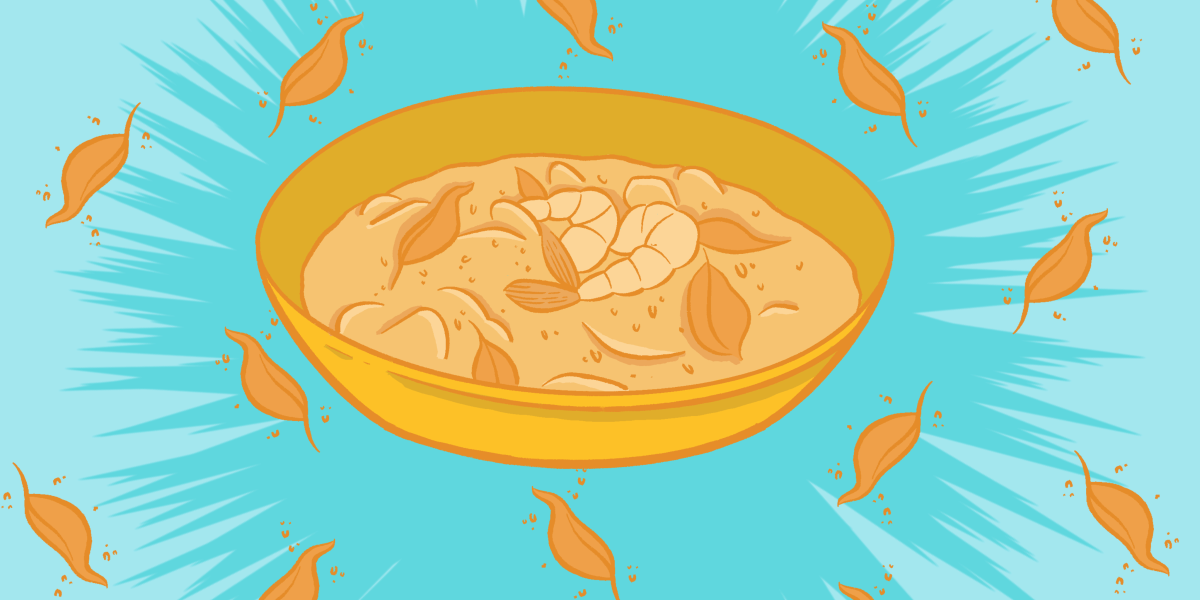 Two months before I leave for New York from Delhi, my grandmother starts writing down recipes of my favorite dishes, trying her hardest to translate them: from bangla to what little english vocabulary we share, from the measurements of her intuition to something a little bit more concrete (but not much: the instructions still range from “a little water” to “as much thickness as you want”) from desi ingredients to “American” parallels.

She includes malai curry in it too, albeit an extremely simplified version of the one she makes. She has faith in me, but not that much faith.

When it came to eating skills, I was a pretty disappointing Bengali kid. I was terrified of eating fish, traumatized after watching my mom suffer a bone stuck in her throat that refused to go down for three entire hours. I preferred Lucknow’s Awadhi biryani—its saffron rice, the big hunks of mutton bathed in yogurt stewed slow in its own juice, to its Calcutta equivalent with potatoes and eggs.

But prawns. Give baby Sreshtha a prawn, head on, and I would devour it. And my grandmother’s malai curry was always my favorite. I’d start with piling the prawns over a bed of rice onto my plate. After swimming in this pool of cayenne-ed cream, the prawns were soaked through with flavor. Then, I’d separate the head, squeeze it with two fingers—shell intact—till any loose meat and all the hidden gravy fell onto the rice before bringing it to my lips to suck in the liquid center. Once I was done sifting meat through shell as best as I could, I’d simply hug it whole with my mouth, smash it with my tongue against its roof splinter out all the meat hanging by its spine till all that was left was a chewed up, unrecognizable carcass of antennae and tiny shards. Only then would I begin on the rice sopping with meat, blood and rich juice.

In New York, I make malai curry with everything but prawns. Tilapia. Roasted cauliflower. One late night, drunk and ravenous with a craving my grandmother had predicted would come, I make do by sautéing some canned tuna and dumping it into a curry of cloves and ginger. Nothing comes close of course, but there’s no space in my paycheck for something as luxurious as shellfish.

No one tell my grandmother any of this please.

The one time I actually try and make the original malai curry, it’s three years after my grandmother gifted me the hand-written recipes. My then-partner had just moved in with me. I demanded we celebrate the only way I know how.

The entire time, I cook in fear: of the smoke alarm, of overcooking, of not cooking it through, and mostly of doing my grandmother so wrong, by the dish and by using the dish for such a decidedly gay celebration.

After, I take a picture for the family group chat—C and I holding hands under the table, our curry-stained smiles beaming at half-empty plates of prawn and rice.

The malai curry is the star of the conversation that follows after. No one brings up my new haircut. No one notices, or says they notice, how my new “roommate” looks exactly like my “friend” from New York. Only my grandmother (or rather her forehead taking up all the space in the video because she couldn’t figure out the camera exclaims into the phone “You look like an Italian boyfriend who just cooked for his girlfriend!” and cackles, oblivious to everyone’s uncomfortable silence.

DINNER PARTY is a four-part weekly series of bite-sized essays edited by Kayla Kumari Upadhyaya. Check out the first piece, Hot Cheetos: A Chorus by K-Ming Chang and the second course, Caesar Salad: Anamnesis by T Kira Māhealani Madden. Illustrations for the series made by A. Andrews.

Sreshtha Sen is a poet from Delhi and one of the founding editors of The Shoreline Review, an online journal for & by south Asian poets. They studied Literatures in English from Delhi University and completed their MFA at Sarah Lawrence College, New York. Their work can be found published or forthcoming in Apogee, bitch media, BOAAT, Hyperallergic, Hyphen Magazine, The Margins, Rumpus and elsewhere. She was the 2017-18 readings/workshops fellow at Poets & Writers and currently teaches in Las Vegas where she’s finishing her PhD in poetry.

Sreshtha has written 1 article for us.