From the very real lesbian back-to-the-land movement to the Birkenstocks / Lesbian Connection to our community gardens and Whole Foods habits to our ongoing association with granola, the stereotype of the “lesbian tree-hugger” (see also: the sustainability dyke) is both pervasive and, according to our Lesbian Stereotype Survey and our general sense of the universe, pretty accurate. Although not all of us are saving our shower water to nourish the eggplants growing next to our chicken coop, our study and several others show that we are indeed more environmentally aware than our heterosexual counterparts.

A 2016 Pew study investigating everyday environmentalism amongst Americans reached some pretty unique conclusions — namely, that unlike most things Pew polls the country about, “environmentally conscious Americans come from a wide mix of demographic, income and educational backgrounds.” When asked about the degree of their dedication to “trying to protect the environment in their daily lives,” there was no relation between urban/suburban/rural living and dedication to daily environmental protection, nor did one’s race, income, educational attainment or political party affiliation have significant bearing. Aside from age — environmental protectors skewed slightly older — there wasn’t much to be gleaned from what inspires somebody to want to protect the environment in their daily lives. That’s right — “environmentally conscious Americans are both Republican (41%) and Democratic (53%) in close proportion to that found in the population as a whole.”

This is probably surprising when you consider the positions held by GOP leadership on climate change — but although Dems definitely outnumber Republicans when it comes to being aware of how science works, more Republicans believe in global warming than you’d think, and the majority of Republican voters do believe that climate change is mostly or partly caused by humans.

On our Lesbian Stereotypes Survey, I asked our group the same question Pew asked theirs: “How often do you try and live in ways that protect the environment?” It seems like at least one demographic does have an impact on these numbers: queer women and trans folks are overwhelmingly more likely to act in ways that protect the environment in their daily lives than everybody else.

First, a caveat: Our answer choices weren’t identical for reasons that escape me now but are probably due to the fact that I wrote this survey in a hotel lobby while on a break between panels at a journalism conference. So, although 63% of Pew’s group picked “some of the time,” compared to 68% of ours, Pew also had “not too often” as an answer, and we didn’t. That option on our survey could’ve been a more accurate option for our “sometimes” group, so the “never” and “always” numbers are the only ones we can really work with here. Even just those, though, are pretty dramatic: 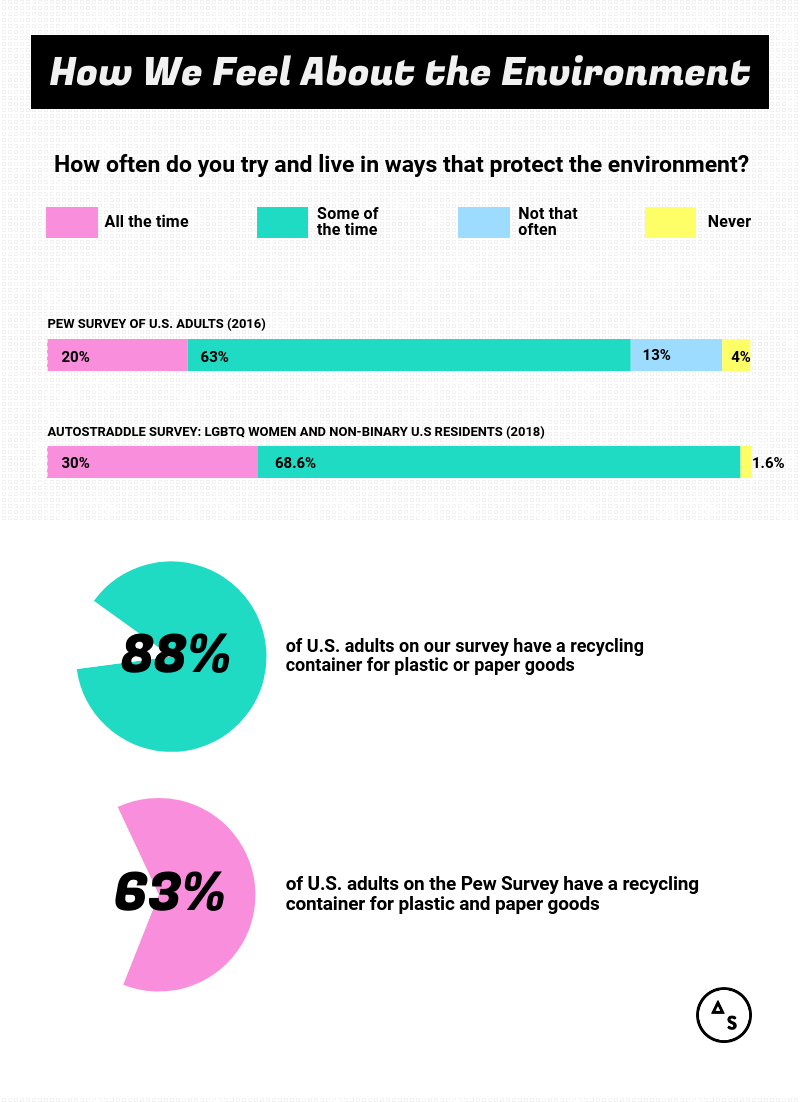 A helpful reader has pointed out, however, that the question itself is a little tricky:

….this is a tricky question to ask because many people have differing opinions on how their individual actions impact the environment. For instance, I’m a cynic who doesn’t believe my personal actions have much of an effect on the environment so I might be more likely to select “not that often” even though I recycle, compost, and have a garden. Someone who lives very similarly to me might have answered completely differently if they have a different view of their personal actions. Obviously its a hard question to answer for both you and Pew, I just think its interesting to consider how this question might be interpreted by different people, and I wonder if that’s why Pew didn’t find many patterns here.

Pew also asked about specific environmentally-conscious behaviors, as did we. We out-performed their group for some (recycling bins, composting) and were slightly lower on others (vegetable garden, rain catch), and I believe our relatively lower results for the latter two is due to lower rates of homeownership amongst our sample.

On our 2015 Grown-Ups survey, open only to readers over the age of 29, only 25% of U.S. residents owned their own home, and on our 2019 Money Survey, only 18.75% of respondents indicated that they were homeowners —  compared to around 65% of U.S. residents over the age of 21. Millennials, who were the bulk of our sample, are also far more likely to rent than own. Although Pew didn’t provide a breakdown of home ownership amongst their sample and we didn’t ask about it on our survey, they did note that homeowners were more likely to have recycling bins, compost, gardens and rain catches than renters.

So, when you consider how few of our readers own their own homes and how many live in cities, it’s pretty remarkable that 31% of them have a home vegetable garden (compared to 33% of Pew’s entire sample) and 6% have a rain barrel or catch (compared to 11% of Pew’s entire sample.) Many who didn’t commented things like, “we would compost if I weren’t in an apartment” or “plan to have all of these when I own a home” or “If I lived in a house I would have a garden, compost and a rain barrel — but I live in an apartment and can’t do those things.” In fact, the majority of the comments in the comment section were comments like this.

Also relevant is that queer people are more likely to live in cities than other Americans — on a different survey, Pew found 31% of Americans living in urban areas, compared to 64% of the Americans on our survey. 55% of Pew respondents live in the suburbs and 14% in rural areas, compared to 28.6% and 8% of our groups. Often due to the fact that most city-dwellers live in small apartments in multi-building complexes, city living isn’t conducive to gardening or composting. That being said, recycling seems to be easier for city mice — 90% of them recycle, compared to 86% of suburban and 79% of rural livers, who might not have the same municipal support.

When I limit our sample to the 644 respondents who live in rural areas, those numbers go way up: 45% have a home food garden, 34% compost and 11.5% have a rain barrel or catch. But suburban people were only slightly more likely to do two of those things (32% have a home food garden vs. 28.6% in cities, 6.5% have a rain barrel/catch vs. 5% in cities) and actually LESS likely to compost (19.95 vs. 24.7%). We can’t compare our rural/urban/suburban numbers to the Pew data because that data is not available.

Why are we so green?

A poll from 2011 cited in a Grist magazine article also found that gays and lesbians were overwhelmingly more likely to support the environment and care about sustainability. In 2009, Echelon Magazine found 33% of LGBT adults had seen or read An Inconvenient Truth, compared to 20 percent of heterosexuals. But why? “Our own hampered civil and personal lives mirrors a disregard for our home planet, which is in crisis from a century of abuse,” wrote Kathleen Connell in a 2010 San Diego Gay & Lesbian News article, in response to that result and others from the Echelon survey. “The mentality that allows desecration of the ecosystem is the same mindset that continues to allow the second-class citizenship of LGBT people everywhere.”

As former AfterElton Editor Michael Jensen pointed out in Grist, “Growing up gay causes folks to look at the world from the perspective of … being an outsider. I think that makes people much more aware of how actions … can affect both other people and, by extension, the environment.”

Our sample also does not contain a lot of cis men and, although Pew didn’t find a gender-based link in its study, a 2016 paper published in the Journal of Consumer Research determined that “the concepts of greenness and femininity are cognitively linked” and that “women display greater concern and willingness to take action to help the environment.”

This connection has been an intentional one for many women and lesbians, echoed by the “Ecofeminism” movement. According to Nancy C. Unger in her paper “From Jook Joints to Sisterspace: The Role of Nature in Lesbian Alternative Environments in the United States,” published in “Queer Ecologies,” the “ecofeminism” movement, which arose within the second wave, “unites environmentalism and feminism, and holds that there is a relationship between the oppression of women and the degradation of nature. Some argue that, because of that relationship, women are the best qualified to understand and therefore to right environmental wrongs.”

So, my green sustainable organic friends… what’s your theory?