Blessed be! Welcome to this Legends of Tomorrow Avalance wedding recap of episode 615, “The Fungus Amongus!”

We pick up where we left off, with Mick rushing in to save the last egg, and the bomb Bishop rigged to the incubator going off. But this time we see that Mick just got blasted out of the room; he’s okay and so is the egg. Kayla looks around and says she’s surprised that everyone just risked their lives to save her eggs, and Sara tells her that they’re Mick’s kids, so they’re family. And that’s just what they do for family. 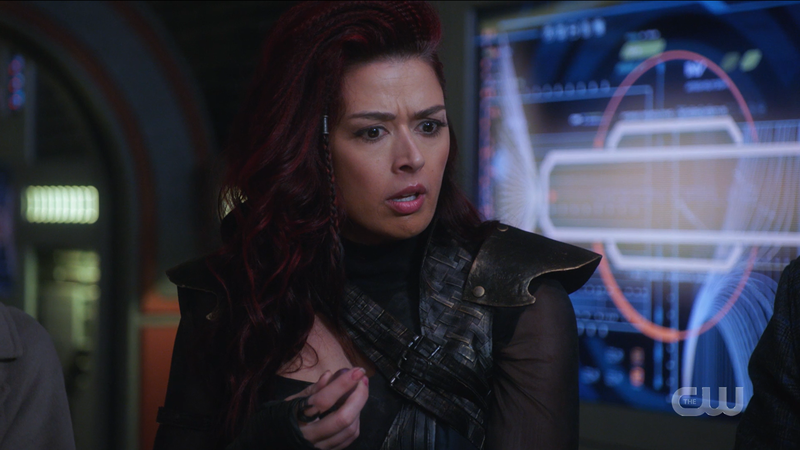 The Waverider is like Olive Garden. When you’re here, you’re family.

They can’t figure out what Bishop’s deal is. They know he’s stalling, but they don’t know why. He jacked up the Waverider, so they can’t go anywhere; Kayla starts to brag that actually SHE can go anywhere because her ship is just fine…but then they see it fly away, stolen.

They see a horror-movie-esque hand on the widow but it’s not an alien or an evil clone, just Behrad, back from visiting his parents and very confused as to what the heck happened. When they catch him up, he feels guilty; he knew Constantine was acting weird, he thinks he should have intervened sooner. He wants to talk to him, but just then Zari and Astra come in and tell everyone that it’s too late. Constantine is dead.

Astra tells them about the ancient fungal network protecting the earth, and Bishop linking Constantine to it before killing him, effectively killing the fountain. Astra says that he watched John die and that all that was left in the end was a little mushroom. 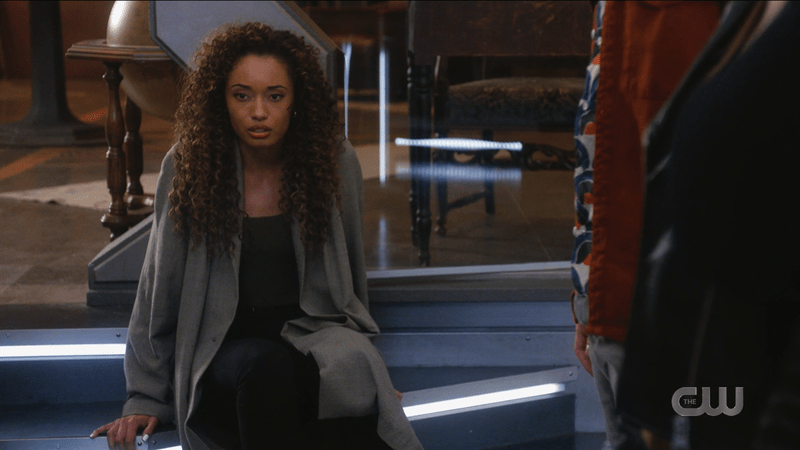 I do love how Astra is now generally unfazed by things like “He turned into this here mushroom.”

Sara is a little overwhelmed by this update and asks where Spooner is, so Astra takes her to where her little Spoon is. They find Mama Spoons taking care of her grown up baby girl, who is unconscious despite her best efforts. Astra realizes Spooner might be dying and is distraught. 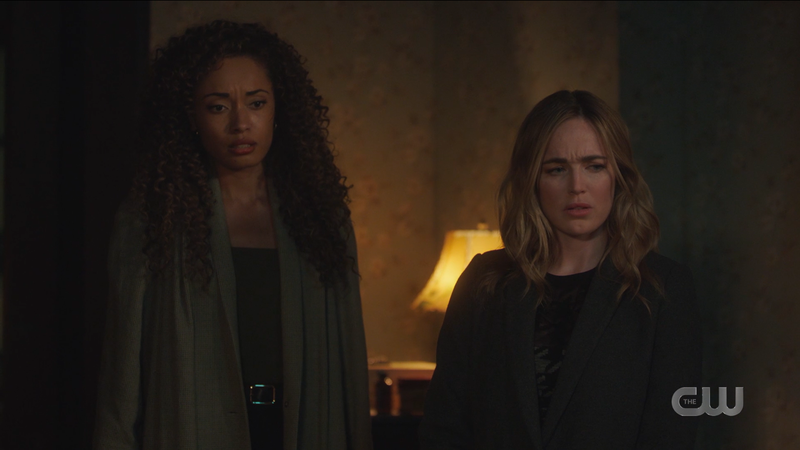 And to be honest, things aren’t looking great for our intrepid heroes! And they don’t even know the half of it! It’s the perfect amount of stakes for a season finale, in my humble opinion.

Meanwhile on the Waverider, Kayla is doing her best to fix their busted ship when Mick comes in to check on her. A timer goes off and she says it’s the egg rotation timer and he says he’ll take care of it, which surprises Kayla. She tells him about how she wants to take her eggs and gtfo, but Mick says he’s not leaving them. In her culture, the mother takes care of the eggs alone after the father gives birth, but Mick says he already did the absent father thing once, he’s not about to do it again.

Back at the house, Astra tells Sara that the fountain being linked to Spooner is what’s making her sick, meaning if it dies, so will Spooner. They’re interrupted by a terrible sound and when they go outside, they see something streaking to earth. Sara, Ava, and Nate go to check it out and find a single pod. Sara knows this tactic and knows it’s just a scout and that more will likely follow if they let it go.

When the alien leaves its pod, Spooner stirs for the first time and Astra rushes to her side. 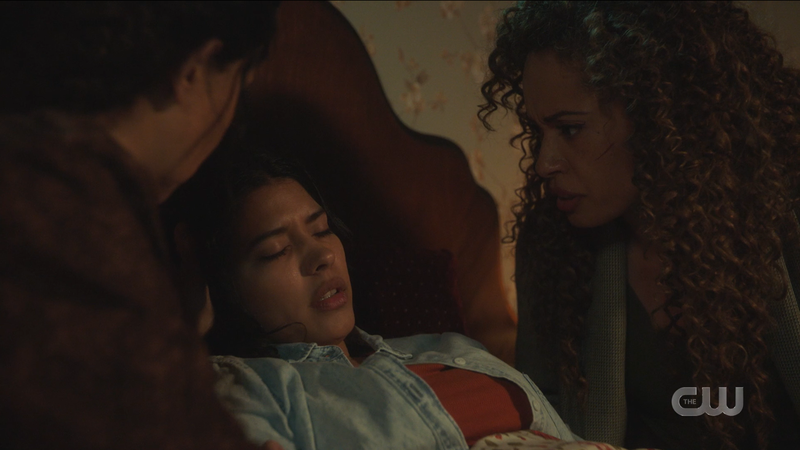 She relays the message she hears from the alien but still seems out of sorts.

Ava and Sara fight the alien but Ava doesn’t have a clear shot and even though she knows Sara can regenerate, she can’t bring herself to shoot Sara. But Nate does not have this same problem and shoots through Sara and gets the alien. But before it dies, he crawls over and sends the rally cry back to the rest of the aliens.

After Spooner falls back unconscious, The team realizes that they were looking at things the wrong way; yes, the fountain is dying so Spooner is, too, but that means that while Spooner is still alive, there’s still time to save the fountain.

Sara scrunches her brow up into her thinky face and Ava asks what’s going on. Sara thinks she knows what Bishop wants. He wants to destroy the Earth so only he and Sara are left. But Ava sure as shit won’t let that happen. 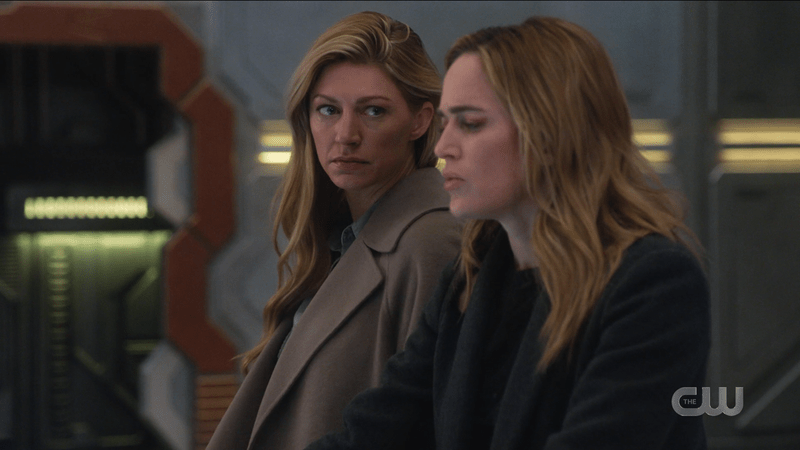 This is the most complicated in-law situation I’ve ever seen.

Back on the Waverider, Behrad rushes into the room and holds the Constantine mushroom up to Zari, saying that he talked to Constantine, heard his voice, that he thinks he’s inside the mushroom. The team looks at him like he’s Horton trying to tell them about Whoville and assume he’s high. Zari wouldn’t want to talk to her bellend of an ex-boyfriend anyway. His ego is what got them into this mess. 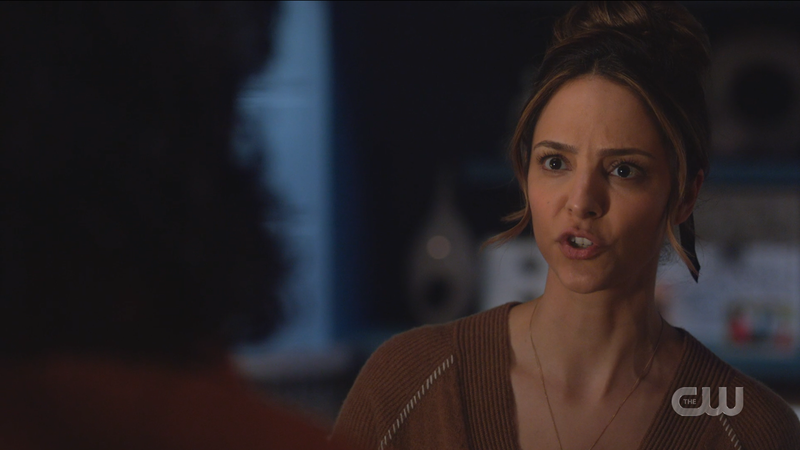 When I said I missed Flannel Zari I didn’t mean I wanted Fancy Zari to get sadder!

As Kayla gets closer to fixing the Waverider, she once again expresses the desire to get the hell out of dodge as soon as she’s able…but this time she asks if Mick will come with her. 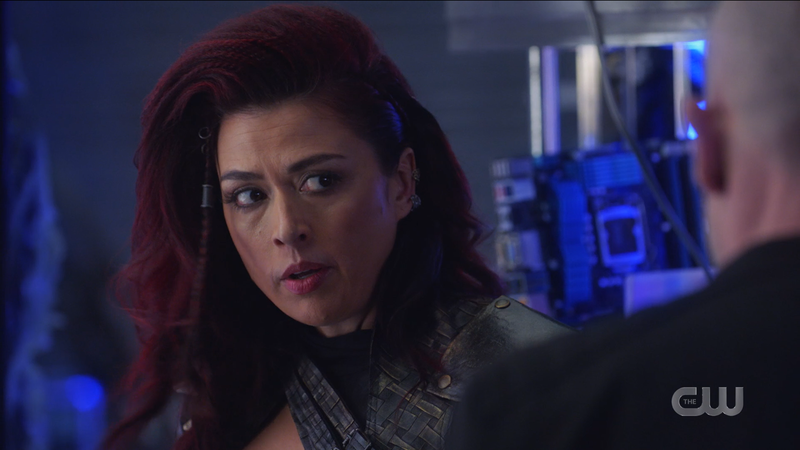 “I mean you’re no kiss in the coat closet, but I suppose you’ll do.”

Kayla gets Gideon back online but as soon as she starts to say how relieved she is, Bishop interrupts her yet again. He plays a pre-recorded video correctly predicting the state of things, and since he knows how Sara’s brain works, he knows she’s figured out his icky Adam and Eve plot. He knows he’s the only one who could save the fountain, and he simply shall not. He smiles haughtily as Ava and Sara watch angrily. 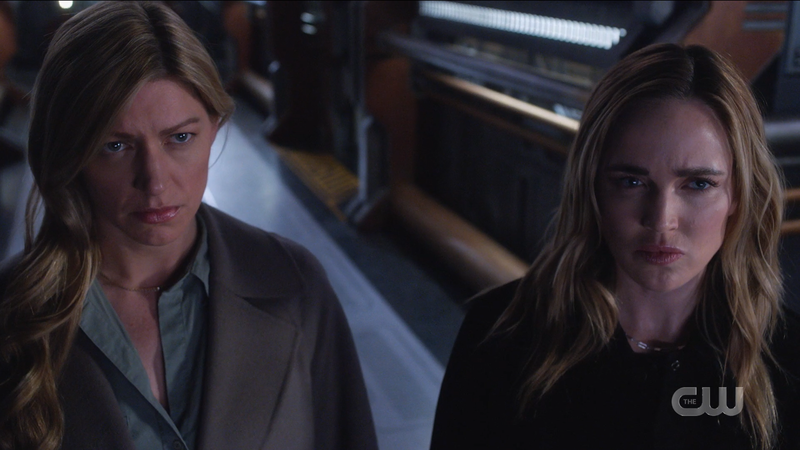 This is how I watched any episode of Supergirl with Lex in it.

The team knows he’s right, that he’s the only one who can save the fountain, so they decided to go back in time to get a pre-evil version of Bishop to help them. Sara thinks this is a bad idea, but they points out that since Bishop shares part of her brain, a What Would Sara Never Do Day is exactly what the Beebo ordered.

So they go back in time to when Bishop was still a wide-eyed scientist, trying to make Ava Prime come to life. Ava and Nate go back to get him, and he thinks that if time travelers came for him, he must be very important, so he happily joins them to help save the world.

After he investigates the poison his future self made, he is of course impressed, but knows how to make an antidote. 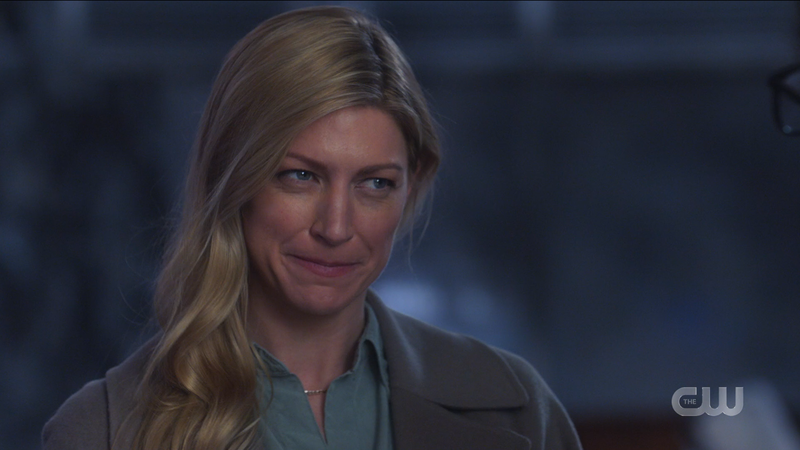 To Ava’s credit, I’d also do anything this face asked me to.

Just then, Behrad rushes in and says that he talked to John, SAW him, and he wants to talk to everyone! All they have to do is take a nibble of the Constantine mushroom.

Zari storms off, thinking this is insane. Sara thinks it’s a bad idea for everyone to get high before a big mission. Ava reminds her that it’s What Would Sara Never Do Day but Sara says she’s putting the kibosh on that holiday and has regained control as captain and says no, so everyone goes to find a way to make themselves useful for the fight ahead. 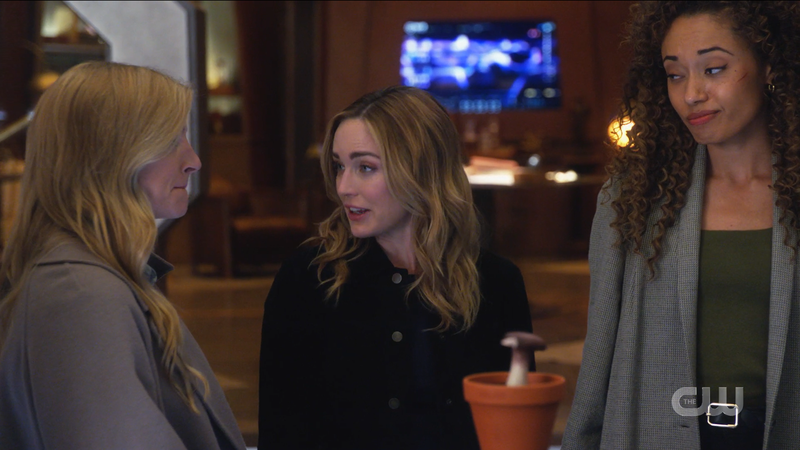 “Friends are friends, not food.”

But as soon as Sara is alone, she hears John’s voice in her head. The voice beckons her to “eat me” and she decides to go ask Alice and take a nibble. She’s transported to a vision of the site of the fountain and sees Constantine there, dressed all in white. He knows what he did was unforgivable, and what he did made the fountain deem humans unworthy of protection. He’s going to stay and feed the fountain with his slow death while she saves Spooner and the fountain; he wants to make it right.

Constantine tells Sara that he takes back what he once told her, that they were too broken to have anything stable when it comes to relationships. He says the only thing he’s ever said that I really liked: “Loving and being loved, that is the point.” He had that, and he got greedy, and that’s how he ended up in this predicament. He has one more thing to tell her, the secret of all life, and he whispers it in her ear, and she is Enlightened. 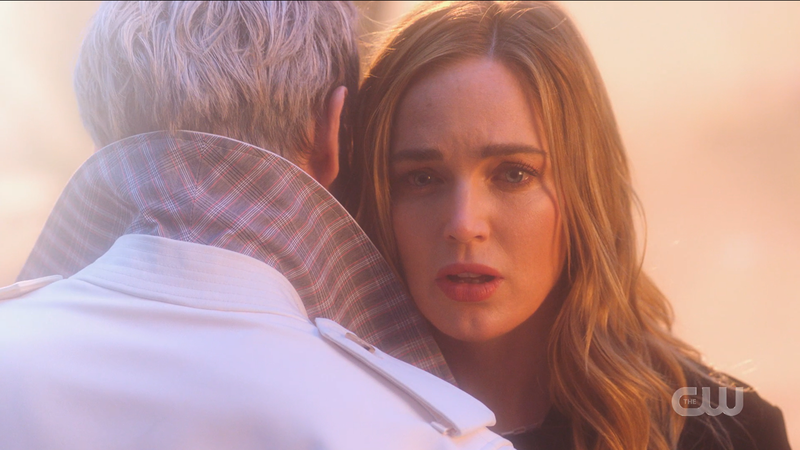 Up on the ship, Kayla runs a diagnostic and Gideon compliments her on her mechanic skills. She’s about to plot an escape but Mick stops her. He doesn’t want her to leave with the kids, but he also can’t leave the Legends. He needs both of his families to be together while he helps save the world. He knows she won’t leave without him; he knows deep down she still cares about him.