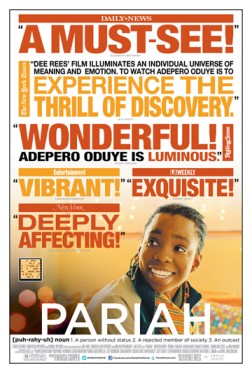 We’ve talked about Pariah semi-constantly for quite some time now and this discourse has been partially enabled by the fact that a lot of us are lucky enough to live in cities often utilized for “press screenings” and “limited release” affairs.

You’ve responded to our personal essays and interviews and previews by asking when the hell this fucking awesome movie is gonna hit your neck of the woods. Well good news ROYAL OAK, MICHIGAN (Yup, I’m talking to you Mom! Hay! Walking distance!), Pariah is getting all up in your grill now! And by “grill” I mean “neighborhood.” Unless you live in another country or whatever in which case you’re probably used to this feeling.

So your time is now, kids. Go see it and let us know what you think!

OPENING IN THEATERS ON JANUARY 20th

By the way, this film has been all over the press and garnered rave reviews from literally everyone in the entire universe. Its rating on Rotten Tomatos is 96%, which is better than every other American movie on their list right now. Hurrah!