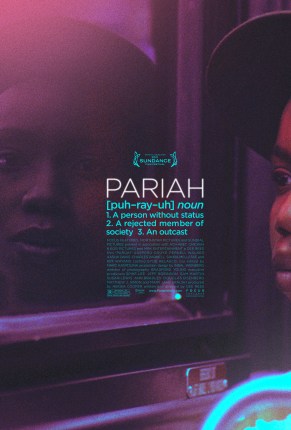 TV and movies lie and we know this and have known this. We know mass media is fueled by private commercial interests, that “reality” TV is anything but, and that movieland’s most popular movies will endlessly churn out a repetitive cycle of well-breasted women in short skirts getting rescued by muscled men with big cars and long guns. It’s rare these days that anything authentic makes it to the screen, let alone something queer and authentic. But it has and it is and it’s called Pariah. It’s exactly where we need to be sometimes: fully present and ready to be in communion with each other.

Pariah, written and directed by Dee Rees, is the story of a black lesbian teenager named Alike who is fumbling through puberty, queerness, and the rapidly-evolving complexity of her gender identity and all her relationships. Rees doesn’t spare one moment of awkward honesty: we’re with Alike through her first lady-kiss and her first attempt to strap on the strap-on feels remarkably like our own. Rees is telling us:  “This is my story, this is our story. I want people to say, I know [Alike.] ”

What’s particularly monumental about this film is that people like you and me do know Alike, but most of the country has no idea people like Alike exist. The title could easily be the best way mainstream media sees queer masculine-of-center women of color. Thus Pariah is part of the collective movement of everyday people demanding truth. It is the fictionalized narrative film equivalent to activist movements such as Forks Over Knives, the Earth Liberation Front and even Occupy Wall Street but the message it’s sending is how to liberate yourself through acceptance and love. Love is the point.

This isn’t an effort to over-simplify a beautiful and profound film; stories that honor truth and love deserve our attention in the same way that we deserve to be loved.

“The communion in love our souls seek is the most heroic and divine quest any human can take”
-Bell Hooks in Communion: The Female Search for Love 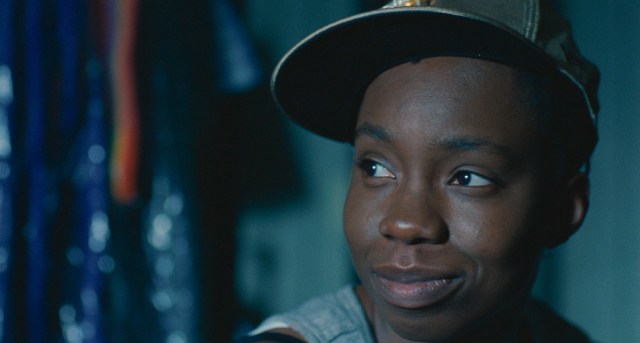 Autostraddle has had its eye on Pariah since it was a short film making the festival rounds and it shares our vision of creating safe spaces where we can explore love and add to the diversity and richness of our community — a place where even in disagreement, there is respect..

So when Focus Features came to NYC with Dee Rees, Nekisa Cooper (producer) and members of Pariah‘s ensemble cast, they landed some super sweet press passes and sent me off on a mission to interview and get down with everyone.

Rees is the quintessential writer/director in dark framed glasses, who seems shy but talks in quick rhythm , who isn’t at all pretentious and just needs to share universal stories. Pariah isn’t just some movie she wrote with her imagination, it’s also about her own “coming into” process. That’s not a typo, according to Rees, Pariah is “less about Alike coming out and more about her coming into her personal freedom and place in the world.”

Rees shared how difficult navigating the lesbian world was during her “coming into” period. She felt trapped between stereotypical binary gender norms and a limited view of acceptable ways to present oneself. Being neither butch nor overly feminine, Rees struggled to create and find a queer space. Alike experiences the same discomfort when confronted with AG culture and being dissected by femmes who don’t think she’s stud enough. Dee Rees breaks down some of her feeling on queerness and how that space is intricately connected to Alike’s journey.

First, holy awesome shit, I got to interview Kim Wayans. 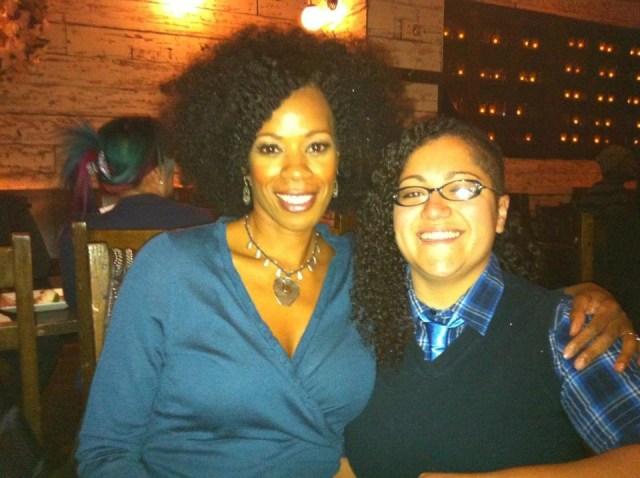 me and kim wayans!

Second, her performance in Pariah is so brilliant and nuanced that if she doesn’t get nominated for an Oscar, I’m pulling out the “yes, racism still runs rampant in the world card” and stuffing it up his golden ass. (See Hey Oscar, Why Wasn’t For Colored Girls Enuf?) Wayans plays Alike’s mother, Audrey, with such quiet intensity that I almost couldn’t believe it was her. Apparently, I’m not the only one, Wayans almost didn’t even get a chance to audition for Audrey because she’s mostly known for being a comedic actress on shows like In Living Color. Thank God, she did because we are graced with an honest Audrey, the religious, devoted mother living in the denial of her daughter’s budding homosexuality and her husband’s possible adultery. Straight up, I felt like I was watching my own mother on the screen. She made me feel like I was a scared sixteen year old again hoping my mom wouldn’t beat me with a Bible cuz I liked girls. According to Wayans, she approached the role of Audrey from “her heart, from the place of a mother who believes that she’s doing what’s right: a mother in a desperate struggle to save her child by any means necessary.”

Think that having Spike Lee as an executive producer and winning an award at Sundance is enough to make your feature film debut a reality? Think again. Check out how Pariah almost didn’t happen because being “too black and too gay” makes people with money nervous about making movies. Producer, Nekisa Cooper, stuck by Rees through loss of funds and lack of studio interest, to prove that relevant, important art can and will be made no matter what. Adeperu Oduye reflects on how universality was the film’s ultimate saving grace.

Pariah will be released in major cities beginning Dec. 28th. Check out their Focus Features page to find where it’ll be playing near you and go see it. Be apart of the truth revolution and if that sounds too crazy, see Pariah for Alike: a queer beautiful black teenage girl figuring out her life on screen. Dive into a movie that doesn’t tell you how to be or what to wear or who to fuck created by people who just want you to feel connected. 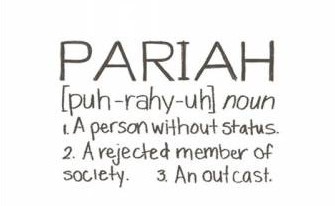 Tell us what lies you’re sick of , how hearing cute girls talk about strap-ons makes you feel all warn n fuzzy inside and how you’re queer community shows you love. Also, have you seen Pariah? What did you think??