Update: Shapiro responded in the comments section, you can read his apology and weigh in on it here. The IP address has been verified as belonging to the CEA in Arlington, VA. (The effect of the default kitten icon is admittedly amazing.)

Perhaps it’s having been struck dumb by sheer, unmitigated rage, but I’ve been sitting on my response to this whole “booth babe” thing for a few days now. Last week I attended the Consumer Electronics Show, a massive annual technology expo in the neon wilds of Las Vegas. CES is helmed by a man named Gary Shapiro, and it’s a flashy, chaotic convergence of media, business, and PR folks, all swarming around the Las Vegas Convention Center for the better part of a week each January.

Mid-week I was deliriously vying for an ethernet connection in the press room when a nice youngish fellow named Matt Danzico asked to interview me for a BBC segment about “booth babes.” The video went live the next day (that’s me — that Taylor Hatmaker gal) and I looked on in horror as Consumer Electronics Association president and all around extremely-influential-technology-guy Gary Shapiro utters some beyond ignorant things — things so carelessly dismissive that calling them toxic might be a gross understatement.

Here’s what Shapiro said re: the booth babe phenomenon: 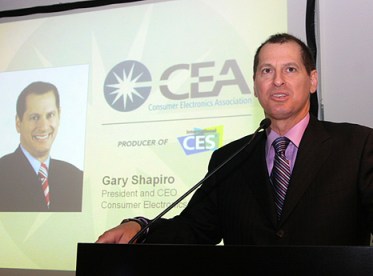 Well, sometimes it is a little old school, but it does work. People naturally want to go towards what they consider pretty. So your effort to try to get a story based on booth babes, which is decreasing rather rapidly in the industry, and say that it’s somehow sexism, imbalancing — it’s cute, but it’s frankly irrelevant in my view.

As a female-identified human person, navigating the vastly male waters of CES is a strange kind of mental contact sport. In the press room, women are so few and far between I almost feel like we should have some secret hand signal of mutual respect, or maybe the cool lady tech journos do and I don’t know about it yet. But beyond the  press room, you’ll see women all right: over-the-top, hyper-feminine ones wearing anything from form-fitting black and massive fake eyelashes to only the most cursory shreds of fabric. This is the booth babe, the ultimate anachronism at a convention ostensibly about the transcendent places technology can take us. (The booth babe issue itself is a complex one. I’m in the same camp with sex-positive tech columnist Violet Blue in feeling that “the way women feel about booth babes is way more grey than black and white.” I plan to unpack my own thoroughly gray feelings about that through the lens of sexuality, just not in this piece.)

In a pitch-perfect article on Gizmodo yesterday, Mat Honan gets to the core of the issue, which in this case is not really booth babes at all — it’s Shapiro’s ultra-condescending, laissez-faire nonchalance.

“The reason his answer is so bothersome is because as the head of the CEA he is, in a very real sense, speaking for all of us in the technology industry. And that Mad Men bullshit doesn’t represent who we are as an industry anymore, and it certainly doesn’t represent what we should aspire to become. Technology is about the future, and this attitude is from the past.”

In an analogy drawn by both Honan and Violet Blue, Shapiro’s words indeed conjure images of Mad Men, everyone’s favorite cultural TV time machine. Namely the utter disconnect between the ad world’s reckless gender elite and the hostile professional environment its attitudes give rise to. It doesn’t feel like a stretch to imagine Shapiro (and his unsettling smirk) slinking off stage right to enjoy a cocktail in the Old Boy’s Club after swatting the BBC reporter away. 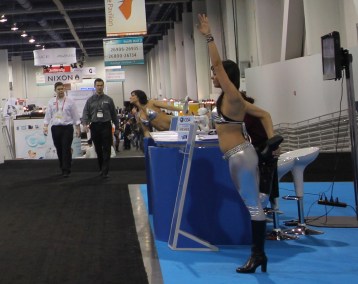 Antediluvian(ly stupid) comments like Shapiro’s make feel like I’m Peggy trying to break into an industry the hard way: by means of the merit of my work. As a woman in the industry, beholden to CES, working day and night at the event over which Shapiro himself presides, the tone of those words made me feel very, very small. And that sure as hell isn’t a place I’m willing to be put — for long, at least.

The thing is, I almost never feel like that. I love what I do, I work with awesome people, and while women are vastly underrepresented in tech, I feel comfortable, extremely competent, and right at home in my field — most days. But Shapiro’s caustically casual dismissal of the booth babe issue altogether makes me feel like I’m treading water in a pool of sharks. Why bother looking at gender politics in a historically (and currently) male-dominated field? How cute of you to bring it up at all!

It’s not Shapiro’s passive support of the time-honored tradition of hiring near-naked women to drape themselves over a company’s shitty gadget that’s rage-inducing, per se. In fact, if we assume that women have agency and can be empowered by the work they choose, booth babes might not be problematic at all — were it not for the bizarrely hyper-sexualized and gender-imbalanced ecosystem that their presence is designed to lend ambience to. Rather, It’s Shapiro’s entirely negligent disinterest in scrutinizing the issue altogether and his inadequate, defensive response, issued to Gizmodo yesterday (published in full at the bottom of the story). You can almost hear the deep, bristling sigh Shapiro must have heaved at those pesky journalists and their “gotcha” moment.

I wish I could dismiss Shapiro’s words as out of context, or spliced together, or anything really. But they just aren’t. The comments were careless, sure, but the follow-up statement doesn’t do much to mend them. Since when was being weary after a day of work an excuse to lapse into complete misogynistic apathy? I guess if Shapiro’s pseudo-apology is to be believed, his comments don’t count at all due to some convoluted mixture of his being married to a female surgeon (which smacks of the “some of my best friends are black” line of reasoning) and the BBC interview having been near the tail-end of ” three straight hours of media interviews.” After all, aren’t we all a little racist/sexist/homophobic or just plain vile when we’re tired? And if we in technology just pretend that gender and sexism aren’t issues worth talking about, the whole thing will probably just work itself out eventually . . .  just like civil rights, women’s suffrage, and marriage equality, one can only assume. Right?

You’re right, Mr. Shapiro: Let’s sit by and idly watch the phenomenon “decreasing rather rapidly” with the detachment of a scientist peering into a petri dish. It’s not like as the president of the whole shebang you’re uniquely positioned to have any pull in this matter, anyhow. And Joan, could you be a dear and fetch another ice cube for my Old Fashioned?