Ravioli is a glorious food that is even more glorious when it comes from somewhere other than your freezer. Making it yourself means that you can fill it with anything (pumpkin? egg yolk? saag paneer? yes, yes, and triple yes) and then eat until comatose since every recipe I’ve ever come across makes no less than 40 motherloving pillows of ravioli. This recipe originally used arugula, but as ½ a pound of arugula costs nearly its weight in gold, I opted for spinach. If you’d like to try arugula, be my guest, but then please make me yours.

1. To make the dough, you’ll need a large clean surface to mix everything. First mix the flours and salt together and then form it into a nest-like shape. Your nest is going to be where you put your eggs because (duh) that’s where eggs go. Before your put them in there, though, you need to separate them in a bowl so you only have the yolk (I forgot to do this the first time and had to spend 30 minutes picking bits of dough/batter off the counter because it was so sticky) and then mix in the olive oil and the water like you’re making scrambled eggs. Carefully pour the egg mixture into your nest and then start folding flour from the sides into the middle, being careful not to break the walls. This is one of the hardest parts of making pasta and I still haven’t figured out how to do it quite right. Keep mixing everything with your hands until you have a solid lump of dough and then kneed it for at least 10 minutes (I know it’s a long time, but think of it as a workout for your gay hands) until it’s elastic and free of air bubbles. Now wrap it tight in saran wrap and let it sit for an hour.

2. You’re ready to make the filling! Heat the butter in a big skillet on medium until it’s all melted and then add the salt, pepper, and garlic. When the garlic starts to turn darker, add the spinach and lemon zest and keep cooking until the spinach wilts. Pour everything into a strainer and let it sit for a minute or two so that all the extra liquid drains out. Once it cools, chop the spinach mixture up into tiny pieces and then stir in the goat cheese and ricotta.

3. Oh hey, it’s time to put it all together. Slice the dough into 8 pieces and cover 7 of those pieces with plastic wrap while you work with the other one. Rolling out pasta dough is a little tricky, especially if you’re used to working with cookie dough or pie crust. The trick here is folding it over to get the shape that you want and picking up the dough a lot so that it doesn’t get stuck to your surface. With that in mind, start by rolling the dough into a ball and then forming it into a little rectangle.

Roll it out into a nice flat, long shape and then fold it in thirds so that two of the rectangle’s edges are smooth. Now turn the rough edges so they’re on the side closet to you and furthest from you. Roll it out again into a long shape and then fold it into thirds again so that you have an entirely smooth rectangle. Roll out the dough one more time as flat and long as you can possible get it. If you have a pasta machine, ignore all these directions and do your thing, you lucky dog.

4. Drop 5 or so small dollops of filling along one side of the dough and then fold the other side over. Use your fingers to seal around the edges of each dollop and then slice your ravioli apart with a knife. Sometimes some spinach tries to escape, so go around the sides of each piece of ravioli and pinch the sides closed as tightly as possible. Put the ravioli in an airtirght container and repeat with the other 7 pieces of dough.

When you’re all finished, cook the ravioli for 2 or 3 minutes in boiling water. You’ll know they’re ready when they all start floating to the top.

5. For the sauce, heat the butter in a skillet turned to medium high until it starts to turn brown. Turn the heat to medium low, add the pine nuts, and cook until they’re slightly golden. Add the salt, pepper, and garlic and cook until the garlic turns darker. Add the lemon juice and oil, cook everything for one more minute and then remove the pan from the heat.

6. Pour the sauce over your cooked ravioli, top with spinach and parmesan, and you’re ready to go. 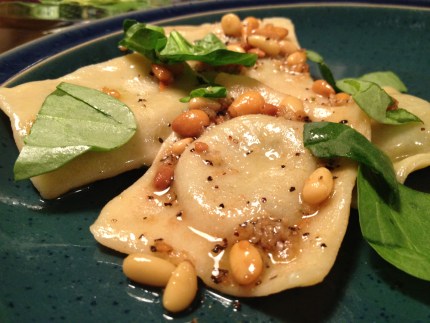