Vandy Beth Glenn showed up for work on October 31st, 2006 wearing a conservative black skirt and red turtleneck sweater. Although it was Halloween, her outfit was not a costume. Glenn, who was working as a legislative editor in the Georgia General Assembly, had recently come out to her immediate supervisor as transgender, and the two of them agreed that the holiday was the perfect time to begin her workplace transition. “I don’t think anything could have turned me back at that point,” said Glenn. “I reached a point in my life where I said it was time to stop fronting.”

Her department head, Georgia Legislative Counsel Sewell Brumby, reacted with horror at her outfit and promptly fired her, arguing that not doing so “would be extremely harmful to our work operations.” Despite the fact that Glenn worked in a windowless office and had minimal contact with legislators, Brumby feared that “some members of the legislature would view that taking place in our office as perhaps immoral, perhaps unnatural, and perhaps, if you will, liberal or ultra-liberal.” As for his own feelings on trans women, Brumby added: “it makes me think about things that I don’t like to think about, particularly at work… I think it’s unsettling to think of someone dressed in women’s clothing with male sexual organs inside that clothing.” Um, do you normally go around picturing your coworkers’ genitals all day? Because that is super creepy.

Glenn filed a lawsuit in U.S. District Court against her former employer, and last month an 11th Circuit panel ruled that her termination violated the Constitution’s Equal Protection Clause and amounted to sex discrimination. The ruling concluded that “a government agent violates the Equal Protection Clause’s prohibition of sex-based discrimination when he or she fires a transgender or transsexual employee because of his or her gender non-conformity.” 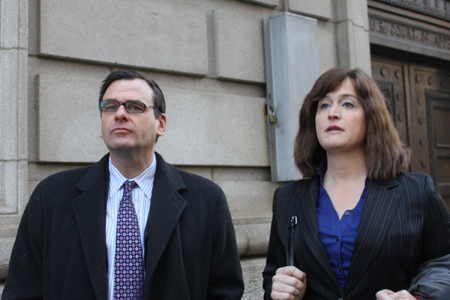 Vandy Beth Glenn and her lawyer

Kristina Wertz, Policy Director of the Transgender Law Center, explains why this ruling is so significant:

“Essentially, the Court said that when an employer makes a decision based on someone’s lack of adherence to narrow gender stereotypes, that decision is based on sex- and that’s against the law…The Court said that all people are entitled to protection from sex discrimination- including transgender people.”

Vikram Swaruup, former Legal Intern at TLC and the National Gay and Lesbian Task Force, adds that the ruling “is important because a number of federal laws protect individuals from discrimination on the basis of sex, while no federal laws protect on the basis of gender identity or expression. As a result, the Court’s recognizing this broader understanding of sex is critical for protecting the rights of trans* and gender non-conforming people.”

This ruling is one of several reasons why 2011 has been called a year of significant progress in the struggle for trans* equality. Two weeks into the new year, the Republicans are hard at work trying to fuck it all up. Mitt Romney firmly opposes last month’s 11th Circuit ruling, arguing recently that federal workplace protections for LGBTQ people would “open a litigation floodgate and unfairly penalize employers at the hands of activist judges.”

And then there’s Tennessee. The state legislature has repeatedly attacked queer people- anyone remember “Don’t Say Gay”? This time, one state Senator is focusing his attention on where trans* people pee. Richard Floyd (R – as if that’s a surprise) has introduced a bill ironically titled the “Bathroom Harassment Act”, which “restricts access to public restrooms and public dressing rooms designated by sex to members of that particular sex.” And since Tennessee does not allow the sex marker on one’s birth certificate to be changed, the bill would essentially make it illegal for any trans* person to use the restroom that corresponds with their true gender. This means that I would be arrested and fined $50 unless I used the men’s restroom. 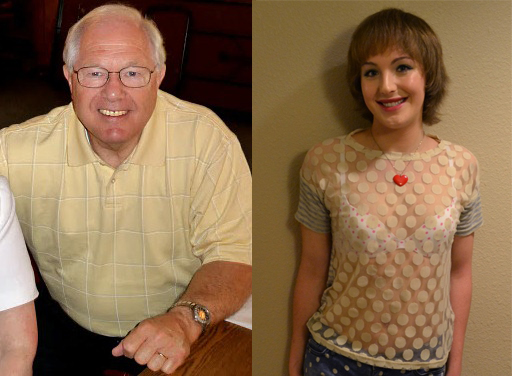 He Thinks We Belong in the Same Bathroom

And what if Richard Floyd came across a trans woman walking into the women’s dressing room? Here’s the violent, transphobic answer in his own words:

“I believe if I was standing at a dressing room and my wife or one of my daughters was in the dressing room and a man tried to go in there — I don’t care if he thinks he’s a woman and tries on clothes with them in there — I’d just try to stomp a mudhole in him and then stomp him dry. Don’t ask me to adjust to their perverted way of thinking and put my family at risk. We cannot continue to let these people dominate how society acts and reacts. Now if somebody thinks he’s a woman and he’s a man and wants to try on women’s clothes, let him take them into the men’s bathroom or dressing room.”

There you have it, fellow trans ladies! Richard Floyd has vowed to stomp mudholes (sounds painful!) in us unless we agree to tinkle alongside him in public restrooms or try on clothes where he can keep an eye on us. And he could “care less” what we or any other queer advocacy groups think. See for yourself in this extended interview he gave to a local TV station:

Why are transphobic politicians so concerned about where I pee? Even last year’s much-celebrated Massachusetts equal rights bill only passed after supporters agreed to drop provisions for “public accommodations”, allowing opponents of the bill to declare a “victory for the safety, privacy and modesty of women and children who expect to be safe and secure in public bathrooms.” It makes me sad that some people assume that I’m a threat to women and children simply because I am trans.  Would it really be less awkward if I were forced to use the men’s restroom instead? All of this “bathroom panic” reminds me of the homophobic public service videos from the 1960s that equated being gay with pedophilia. Then and now, the scaremongering has no substance behind it. The truth is that here has never been a documented case of a trans* person assaulting someone in a public restroom or dressing room (but there have been numerous cases of cis people attacking trans* people in these spaces). And as long as our politicians continue to ignore this fact, full trans* equality will never become a reality. Don’t stomp a mudhole in me, Richard Floyd —  just let me pee in peace.