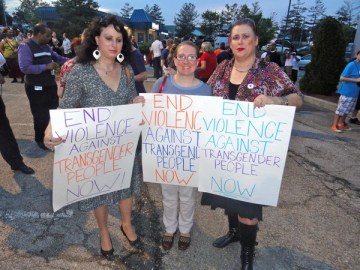 On April 18, Chrissy Lee Polis, who is 22 and a trans woman, tried to use the washroom in a McDonald’s in Maryland and was attacked by two patrons instead.

According to the police report, the incident began when the two attackers were upset when Polis tried to use the women’s bathroom in the McDonald’s. They then attacked her as she lay on the floor, while a McDonald’s employee filmed the incident and other employees and customers just stood around. In the video, which is available here (with a warning that it is indeed a hate crime, and very violent), there is audible laughing in the background. Another McDonald’s employee and a female customer attempted to separate the attackers.

On Sunday, in an interview in the Baltimore Sun, Polis said the attack was “definitely a hate crime” and talked a little about her experience:

“They started ripping my hair, throwing me on the floor, kicking me on my face. When I tried to use the phone, the girl ripped the phone out of my hand […] when I sat there to collect my stuff back, the one girl kicked me in my back, stepped on my arm. I had so many bruises. […] I don’t remember having a seizure. I do remember going into one, that’s why I tried to sit there and be calm. Every time I tried to walk away, they followed me. […] Anyone in my predicament should not be afraid to walk the streets. They should not have to go into a restaurant and get gawked at and made fun of. They shouldn’t be afraid to leave the house. It’s just wrong.”

The franchise owner of the McDonald’s in question fired the employee who made the video.

So far, responses to the incident have ranged from outraged and supportive (anyone with a moral compass) to neutral and blase (McDonald’s corporate statement, which I’ll share in a minute).

On Monday, Joseline Pena-Melnyk, a member of the Maryland House of Delegates, sent a letter to the others in her legislature. In it, she calls for an anti-discrimination bill that protects gender identity in terms of employment, housing, and public accommodation, as well as reminding her colleagues that protecting trans rights is an important part of protecting civil rights. We have talked about this before. Part of the letter reads:

“I respectfully ask that each of you take the time to view the video at this link, but please be advised that it is disturbing and portrays a horrific hate crime: http://tinyurl.com/3roab9m

Incidents such as this illustrate why the transgender community in Maryland and elsewhere needs to be protected through anti-discrimination legislation. Supporters of House Bill 235 in this past legislative session recognized this need and stood up for the rights of this community. While HB235 did not include protection from discrimination in public accommodations due to the intense pressure opponents placed on the bill’s supporters, the bill would have raised public awareness of the issue and paved the way for complete protection for Maryland’s transgender population. Contrary to statements made by those who should be leading the fight for civil rights in Maryland, this was not an anti-family bill, but a basic civil rights bill. […]

I challenge each of the Senators who voted to recommit HB235 on sine die (see the link at http://mlis.state.md.us/2011rs/votes/senate/1123.htm) to serve as primary sponsors of a stronger version of HB235 in the 2012 legislative session. It is time to rectify the wrong that has been done to transgender citizens of our State.”

The bill she talks about, HB235, was meant to protect trans people from housing discrimination as well as giving additional employment and credit protections, though the extent it would have managed to actually do that is very debatable. HB235 was discarded by the Maryland Senate just two weeks ago.

On Monday evening, there was a rally against transphobic violence outside the Baltimore McDonald’s in which the attack took place. About 300 people, including activists, politicians, and Polis’s mother and grandmother, attended. In an interview with the Washington Blade, Kathleen Hand, her grandmother, said, “I want to thank everyone personally who came tonight. Chrissy is doing great.” In related news, Ms. Hand is expected to win the Most Awesome Grandma Ever Award later this year.

This response is also much, much better than the official McDonald’s stance on the issue, which, in full, reads:

“There’s no room for violence under the Golden Arches. We strongly condemn the videotaped brutal assault in one of our Baltimore-area franchised restaurants.

First and foremost, our thoughts are with the victim, Chrissy Polis, as she recovers.

Our franchisee continues to investigate the behavior and response of his employees. Appropriate action is taking place as warranted.

We want to reassure our customers that your neighborhood McDonald’s is a safe welcoming place for everyone. We share our customers’ concern. We are doing everything possible to make sure the right thing is done.”

This isn’t the first time a trans person has been assaulted in a McDonald’s. In 2006, Christina Sforza used the women’s bathroom (a fact which should have been irrelevant for anyone of any gender since the men’s was out of order), and was attacked by someone wearing a blue McDonald’s uniform, who Sforza believed was the manager. He hit her head and body with a lead pipe while yelling, “I’m going to kill you” and the f-word, while other staff and customers watched and cheered.

In 2009, Zikerria Bellamy was refused a job interview in a Florida McDonald’s because she’s transgender. Bellamy was also verbally abused by the manager at that franchise, who said: “You will not get hired. We do not hire faggots. You lied to me. You told me you was a woman. And then you lied to me.”

Change.org has launched a petition to hold McDonald’s accountable. Yesterday hundreds of people turned out in a rally to support Polis.

As Jos on Feministing points out, trans people, and especially trans women, are targeted at disproportionately high numbers, and just locking everyone up on criminal charges doesn’t get rid of transphobia, it just moves it to a different place.

However, the idea that, once again, an incident of transphobic violence will disappear and leave McDonald’s without consequences, legal or otherwise, is upsetting. Their statement is far more concerned with everyone’s continued patronage of McDonald’s than it is about discriminatory attacks on transpeople. Apathy like this needs to be socially unacceptable. Policy needs to change — even if it’s only the in-house policy of an evil restaurant chain (to start). Pena-Melynk’s bill is a step in the right direction. Just “investigat[ing] the behaviour and response” of the assailants isn’t.