It’s a bit embarrassing, but I’ve always found the New Year romantic. Perhaps it’s a hold-over from too many romcoms internalized as a child, or the gravity of my Cancer Venus. But when the clock strikes midnight, the glimmering thoughts that slip across my mind are usually all variations on the same question: who have you been loved by this year?

And so this is my New Year’s ritual: succumbing to flashbacks, both pleasurable and painful. Through memory, I am reminded that my body is an archive, collecting a thousand stolen looks and crumpled feelings. Allowing myself to hold all of them, even when they burn, is a kind of masochistic baptism by fire in which the new year is burnished.
The New Year is a time to meditate on and process transformations big and small. It’s okay to start off fresh with the same thorny regrets, winding uncertainties, and unresolved rogue desires as before. Sometimes just acknowledging them all is the start of something novel. As the Year of the Ox draws to a close, I hope you know that you’ve loved and been loved this year. Here’s what love looked like for me. 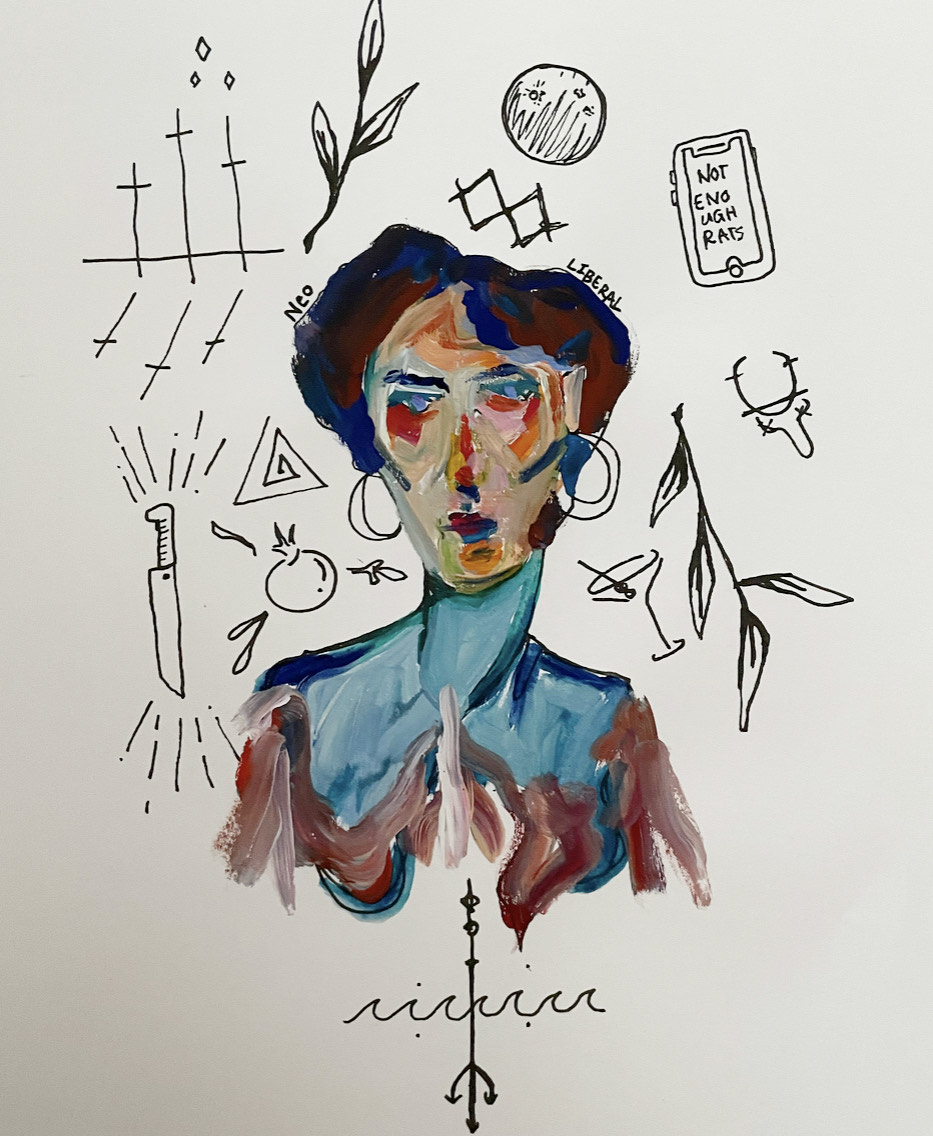 The last time I saw Autumn was nearly a year ago, a few days after Chinese New Year.

“The usual place?” she inquired through the phone, and I agreed. In the early days of our relationship, Autumn would drag me, grateful and delirious just to be in her presence, into the shadows of every cinema on Sunset Boulevard, the air between us perfumed with buttered popcorn.

Since the pandemic, we were more accustomed to watching the little white boats float cheerfully across the Echo Park Lake in the open air, our mouths full of shaved ice or elote.

“I missed you,” she greeted me, her dark eyes crackling with their usual energy.

“Same,” I hummed into the blackness of her hair, breathing in sweet notes of floral and oats.

“It’s the Year of the Ox — your year. It’s supposed to be lucky, I think,” she offered out of nowhere, mouth pressed to my shoulder. Around us were all the sounds of Los Angeles: the steady hum of traffic, the shriek of children venturing too close to the water’s edge, the inviting calls of the Elote Man with his cart, the vaguest insinuation of a breeze. After a moment she pulled away.

“I don’t think this is working,” she muttered, a jagged admission. My breath caught in my throat.

“I know,” and it was true. Around us, life continued as usual.

When you break up, who gets custody of a city? The answer was obvious enough. Los Angeles belonged to Autumn; from Chinatown to Silver Lake to the West Side, the skyline was hers, for she had loved it longer than I had.
And so in those first couple of months, I curled in on myself in the hazy light of my bedroom, scrolling on Instagram, drinking copious amounts of Earl Grey Tea, watching Scandinavian crime dramas in the hopes of being miraculously transported. 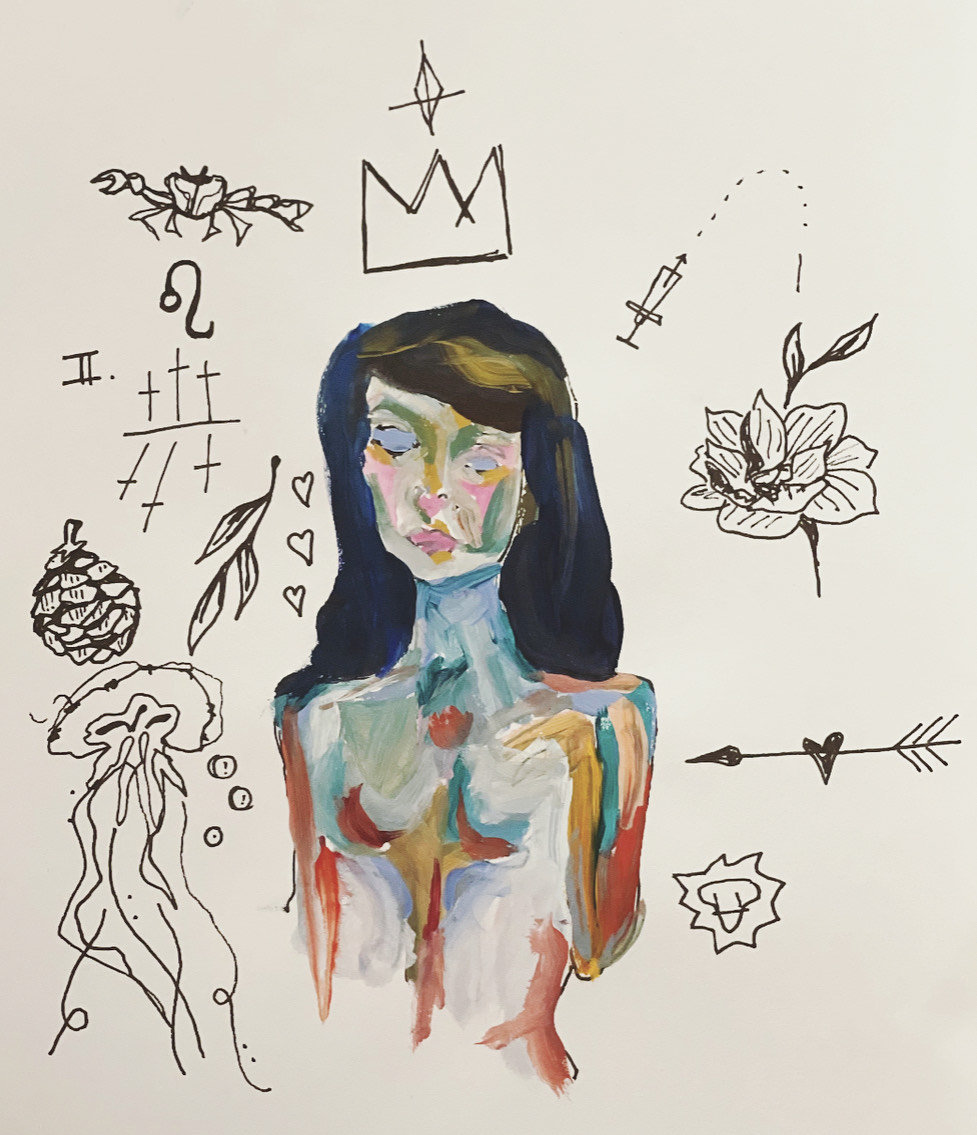 Claudia appeared out of the ether like a bolt of lightning. In the beginning, I only knew her from her photographs, the shadowy mystery of an artful Instagram grid.

From those photos, I could tell she was beautiful. Dark cascading hair and eyes green and smooth like sea glass. Her arms were adorned with several striking tattoos that I would sometimes imagine myself tracing when it got late and I was sleep-deprived. She was willowy and pale, vaguely otherworldly, and I was in awe of her from a distance.

And then, quite suddenly, the messages began. A thousand questions back and forth and all the time in the world to answer them. I told her about my childhood, and she regaled me with stories from hers. We discussed cryptids and immortal jellyfish, faeries and addiction, annoying bosses and previous love affairs.

After only a few days, it occurred to me dully that I was falling in love. I absorbed this realization with a queer kind of horror. Claudia lived in Vancouver, Canada and told me she was on a very strict “romance sabbatical.”

“I couldn’t do a long distance relationship, I don’t think,” she mused casually one evening when we were exchanging voice memos.

Internally, part of me revolted. What do you call this then? I wanted to ask her. We stay up on the phone together until three a.m. and tell each other everything. Surely you feel it? But I swallowed my disappointment quietly, and decided to download Tinder.

So much for the luck of the Year of the Ox. 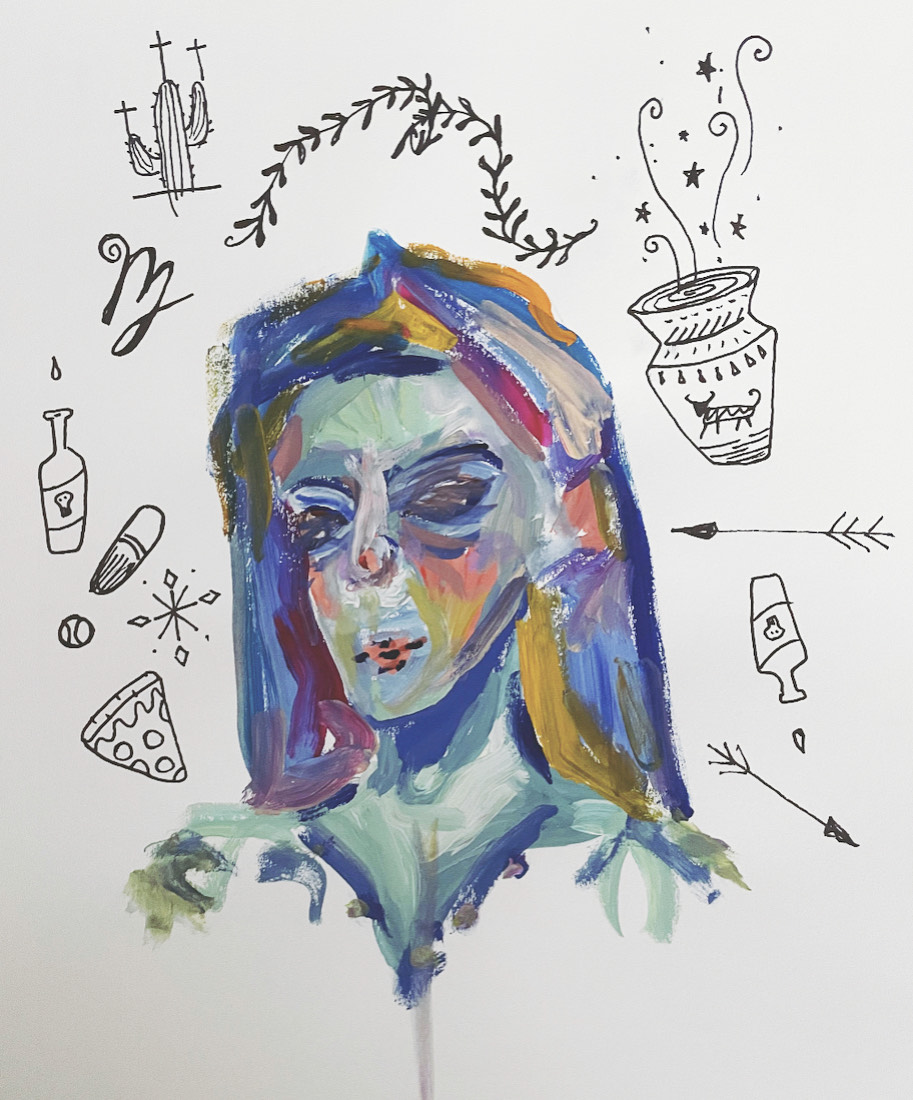 On our first date, Kierra slipped her fingers into mine so confidently that I nearly froze on the spot.

She told me how she had just moved to LA from the Midwest, how she loved dogs and used to play soccer at the national level. It was so easy with her, aside from the singular hiccup of her ex, for whom she was clearly still head over heels.

“Why don’t you call her? See if she’s rethought things?” I goaded, one evening when we were curled up in bed, even though part of me hurt to ask.

“I’m over it. I really just like you,” she repeated, for the thousandth time that evening with her typical Virgo stubbornness. Each time she said the words, they sounded less and less true. 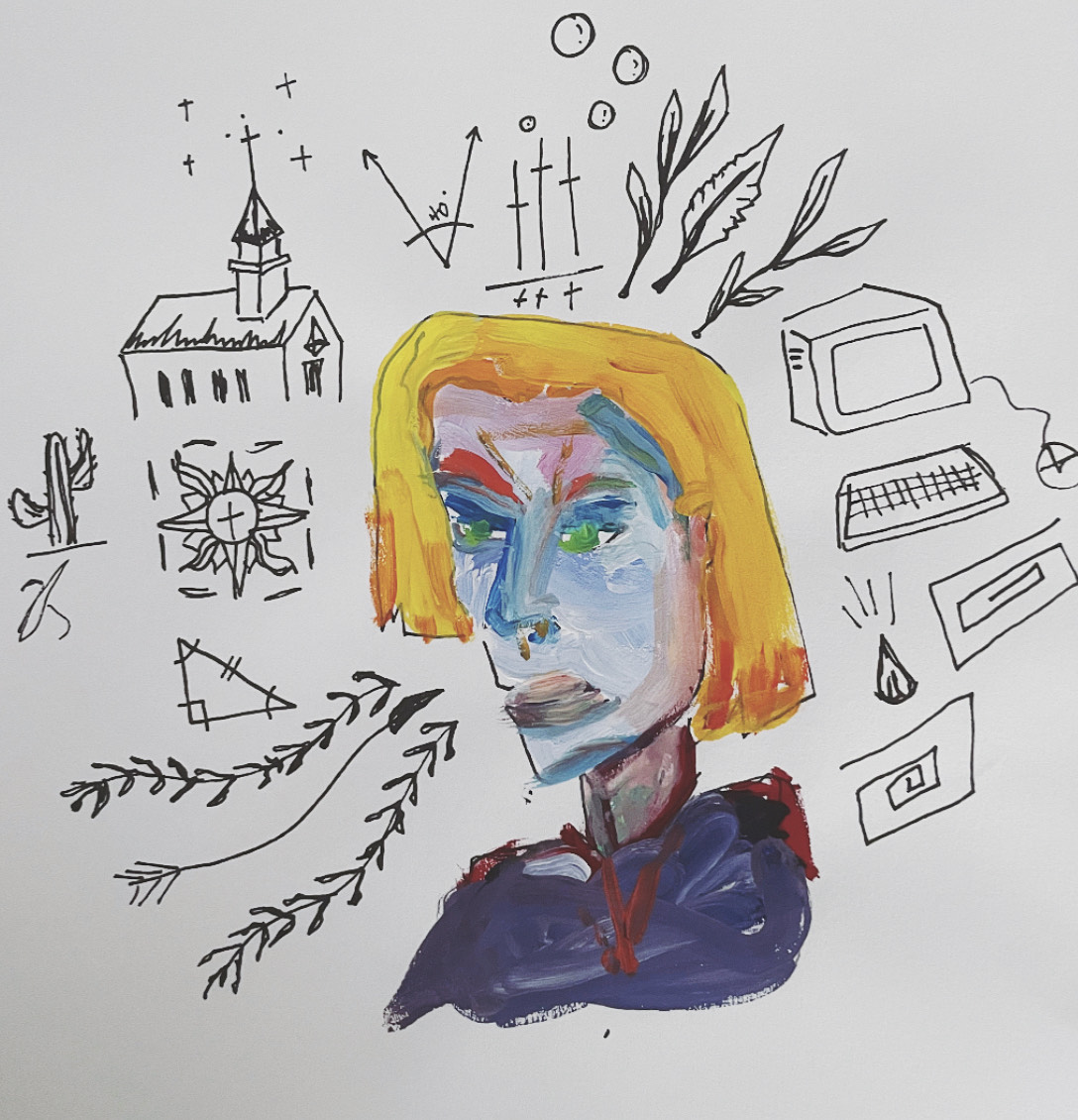 “You should know I already have a long-term partner, but they live in Belgium and are possessed by demons,” Calliope explained on our first phone call. I took this information in stride, not one to scoff at the supernatural.

“Tell me about them?” I prompted, holding my breath, as she revealed the intricacies of her life over the speaker. I’m not polyamorous, but the self-destruction of letting my own desires become sublimated by the potentiality of the other felt too good to pass up.

“I run a cult,” she offered, when I asked her what she did for work. I did not tell her that I already knew this, having Googled her the previous night. Her whole being pulsed with paradox; belief and skepticism quivering messily in one skin. And that might have been enough to pull me in, if not for one small, little detail.

“I don’t believe in the vaccine,” she expounded on one of our calls, voice light and lilting with good humour.

“Ah,” I responded, disappointed. But only vaguely. 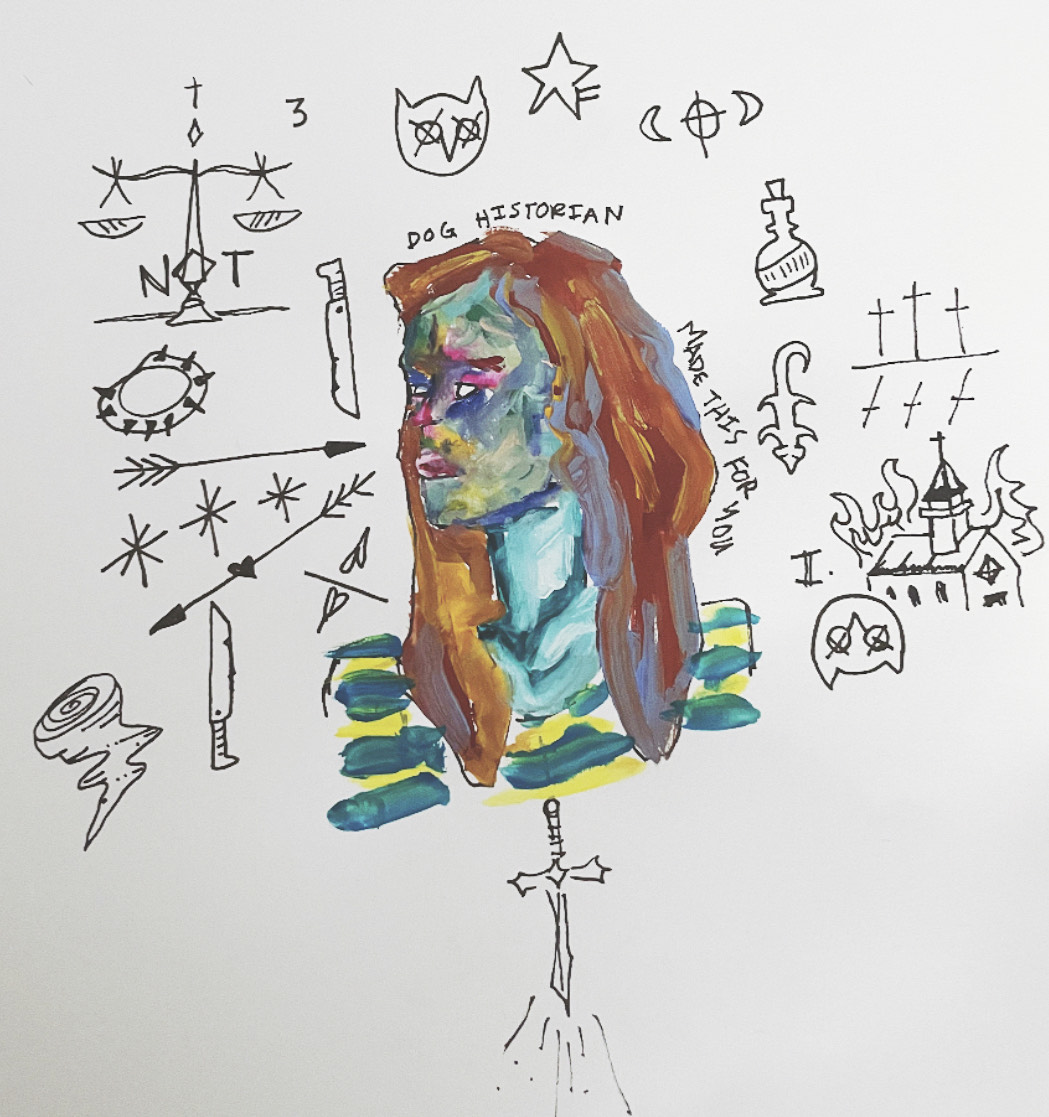 “Are you really thirty-six?” I questioned, biting my lip when we first met. Val nodded patiently, her eyebrow raised like a challenge.

“Don’t you worry about the age gap?” I tried again. I would be turning twenty-four soon enough, but there were still thirteen years between us.

“Yeah, of course it freaks me out. All my friends ask what we even talk about. My roommate’s always joking that while I was doing molly at Coachella you were learning pre-algebra. It’s kind of messed up.” Her friends were more posh than I could ever hope to be — actors and models, all unseasonably beautiful, who lived cloistered away in the hills.
Somehow, the fact that the years between us unnerved her made her even more attractive to me. It helped too that we had so much in common, from dysfunctional families to a mutual obsession with painting.

Our first kiss wasn’t even really a kiss. As I was leaving the park after a socially distanced visit, she suddenly pulled me in close to her, pressing her own masked lips to mine. My whole body was flushed with an impossible, glowing warmth. I could only stare in wonder, as she stepped back.

I think I’m in love with you. She wrote simply. And then, a second later:

I actually don’t know if I meant that. 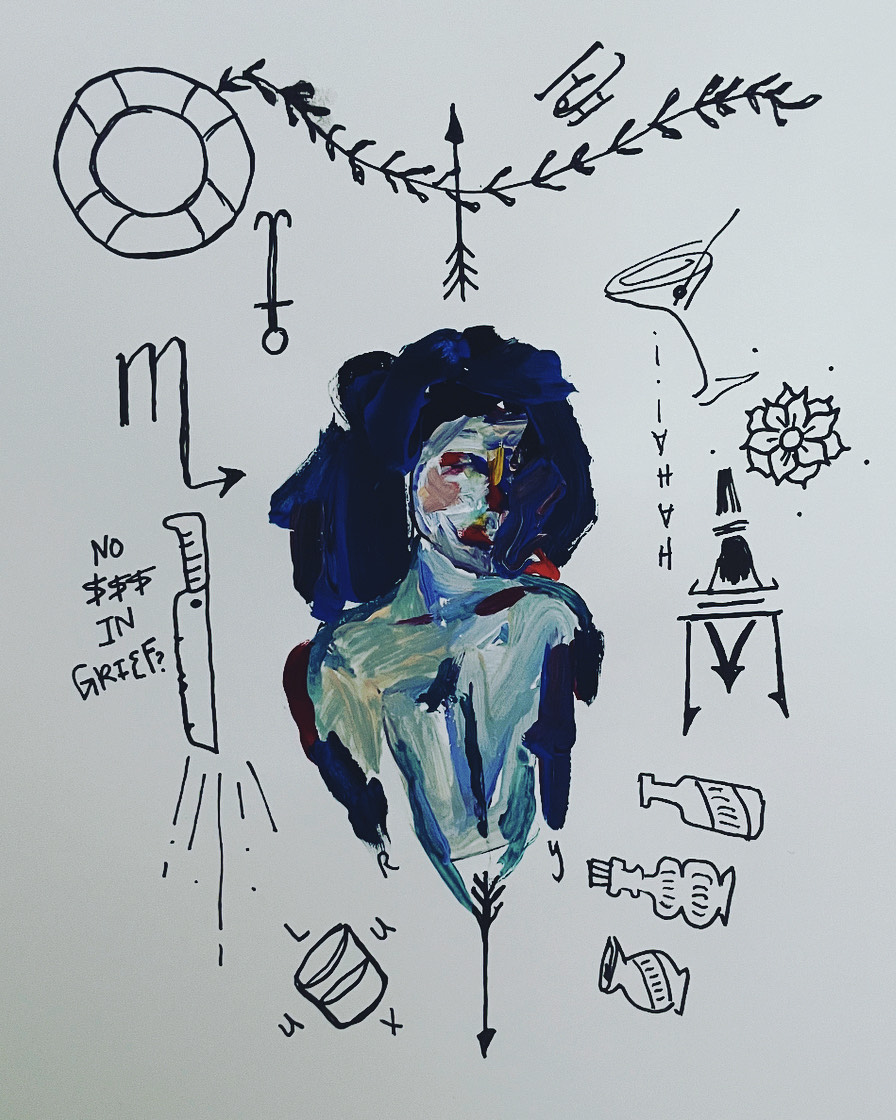 “People expect me to be all about fame, but actually I’m really down to earth,” Naveen shouted over the roar of pop music coming from the speakers in her Maserati. And I supposed that for someone with over two million followers on Instagram, she was fairly normal.

She handled it well, after all, when I asked her if we could just be friends, because my heart was being pulled in too many directions to count.

“As long as you don’t ever cancel on me, and you agree to set me up with any cute girls you don’t end up with,” she laughed, throwing her hair back and speeding up as the light turned green.

Claudia: The Year of the Ox

“I have to tell you something,” Claudia began one night over Instagram Video. I had resigned myself to a platonic relationship with her, despite the intimacy we seemed to share. I was on the border between sleep and wakefulness, a cacophony of different haphazard sentiments echoing around inside my skull. Valerie wanted to be exclusive, but I was still unsure.

“Yeah of course, what’s up?” I waited for her response.

“I think I kind of have a huge crush on you. And it’s okay if you don’t feel the same, but I needed to tell you. I had to be honest,” Claudia expelled in a rush, her voice raw and vulnerable through the speaker.

“I thought you said you could never do long distance?” I babbled, my eyes wide.

“I was just trying to convince myself, I think. But in the end I keep finding myself here, with you.”

I swallowed hard, feeling luckier than I had in months.

All original art by Katie Alafdal

RITUALS is a nine-part miniseries edited by Vanessa Friedman. The writers who contributed to this miniseries will share all sorts of rituals: rituals for love, rituals for grief, rituals for forgiveness, rituals for inner peace. We’ll publish a few pieces each week through December 31. Please share your rituals in the comments, and let our contributors know which rituals in particular speak to you.

Katie has written 3 articles for us.