A lot of queers who — very understandably — didn’t watch the original Sex and the City are watching And Just Like That, and even though I promised you’d be able to follow along anyway, I think I need to set the stage for this one. Big was, as both me and Susan Sharon pointed out last week, a real prick to Carrie for most of their on-screen relationship. During one of his and Carrie’s most wankery times, he went to Paris when he couldn’t commit to her, fell for this 20-something fashion phenom named Natasha, married her, and then cheated on her with Carrie in their apartment, repeatedly. And then! When Natasha caught them! She chased after Carrie and fell and busted up all her whole teeths and had to get an entire new mouth! Carrie is the one who had to take her to the teeth ER!

Oh ho, but Carrie wasn’t done. She later stalked Natasha to this restaurant where she was just trying to enjoy a nice meal with her new chompers, and made a scene about how guilty she felt. Natasha was like, “Well now you’ve ruined both my life and my lunch!” And that glorious one-liner was the last we saw of her. 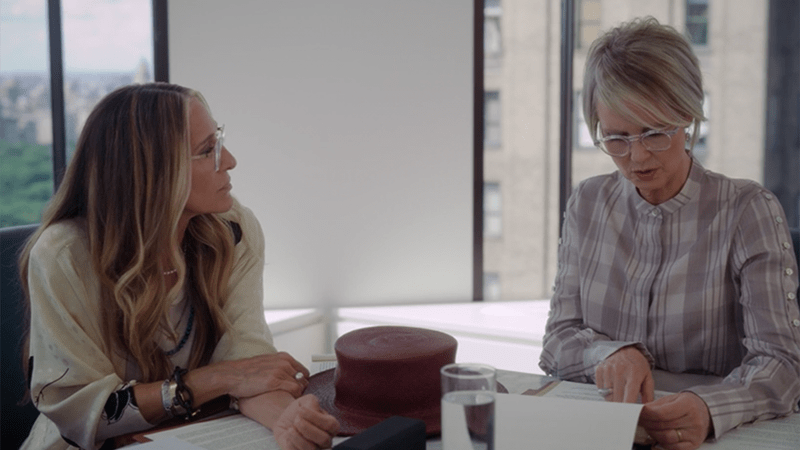 You know, I maybe should have spent less time asking my Black professor to tell me I’m not racist and more time pre-reading this will, now that I think about it.

It’s time for Big’s will reading. You know how these multi-millionaires are. Money to this museum, money to that major NYC hospital, this to Harvard Business School, that to whatever symphony, and one million dollars to his ex-wife. Carrie cannot believe her ears or her eyeballs when Miranda shows her the thing about the ex-wife. One million dollars. Natasha Mills. Right there in big bold print like getting punched in the head, or like someone ending a one-word text with a period. Horrifying. Conclusive. “OK.” “Fine.”

Carrie takes the information home and flips out, trying to log into Big’s computer, trying to open his phone, digging through his wallet and suit pockets. When she finds a photo of a dog named Gogi that she’s never even heard of, she decides it’s time to start acting like the living embodiment of some kind of Adele song. She emails Natasha, she DMs Natasha on Instagram, she goes to Natasha’s office. Nastaha wants no part of this grief tour: she doesn’t respond to Carrie’s emails, she blocks her on Insta, and she has her assistant tell Carrie she’s in Rome, even though Carrie saw her walk into the building from the back of the Uber where she was — once again! — stalking her. 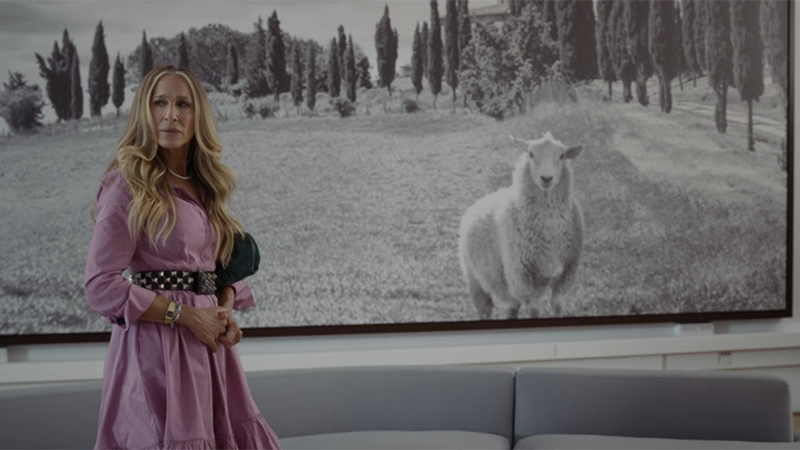 That was a really sheep shot!

Miranda and Charlotte are with Carrie for her big adventure. Miranda tries to calm her down early on, suggesting that she is, perhaps, “a little wired.” To which Carrie responds, “Oh, I am! I’ve been spiraling all day!” She is also not sleeping or eating and is spending full days clomping around the entire island of Manhattan in six-inch heels. Miranda tries to talk some sense into Carrie, who will not hear it. She says she’s furious at Big for dying but also for ruining their happy-sad ending! They were happier than they ever had been when he had that heart attack! They were happy, goddammit! Happy! Now she’s feeling as insecure and impotent as she was when they were dating. Charlotte does not try to talk sense into Carrie; instead she takes one look at Natasha and says, “Ugh she’s wearing flats!”

Carrie finally gets a face-to-face with Big’s ex-wife — by walking in on her in a public restroom at a coffee shop on the Upper West Side. Natasha screams. Carrie screams. They both throw their drinks in their air. Natasha’s is, fortunately, iced. Carrie’s is boiling hot and she burns the heck out of her hand. It’s that, more than anything else, that piques Natasha’s sympathy. She makes Carrie a little ice pack out of her son’s snack bag and tells her she hasn’t talked to John since their divorce, that he was always a puzzle to her, that she’ll never understand why he married her when he was clearly in love with Carrie, that she will not be taking the money, and please stop trying to follow her on social media. 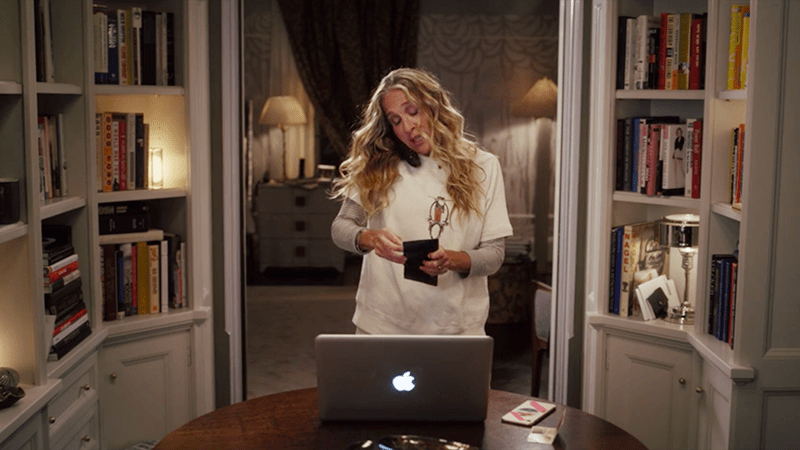 Do you think we’re the only people in this city who still have landlines in our homes? 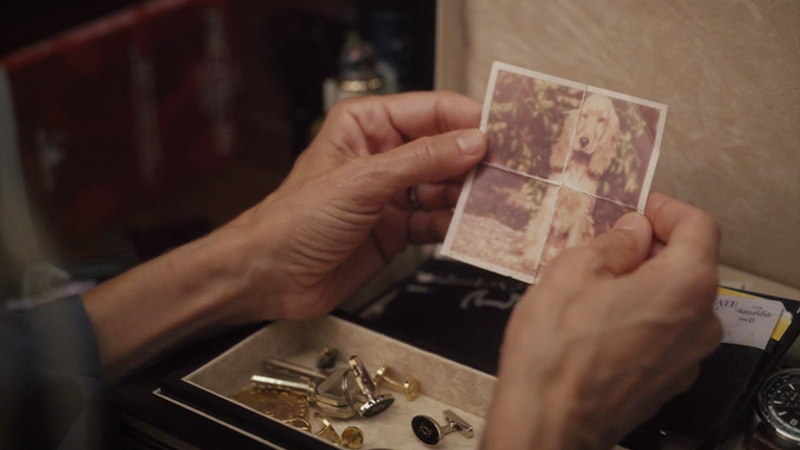 Okay well I can admit when a bitch is cuter than me.

Carrie understands this enormous generosity for what it is. She thanks Natasha sincerely, and finally calms down.

Elsewhere, EVERYTHING IS SO GAY. 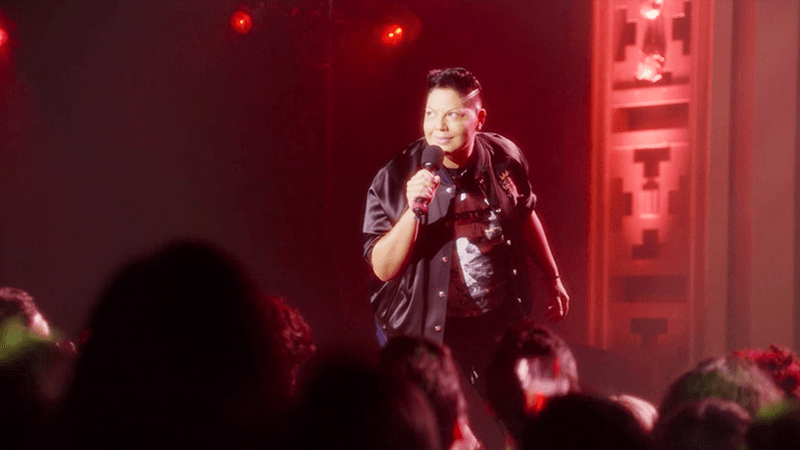 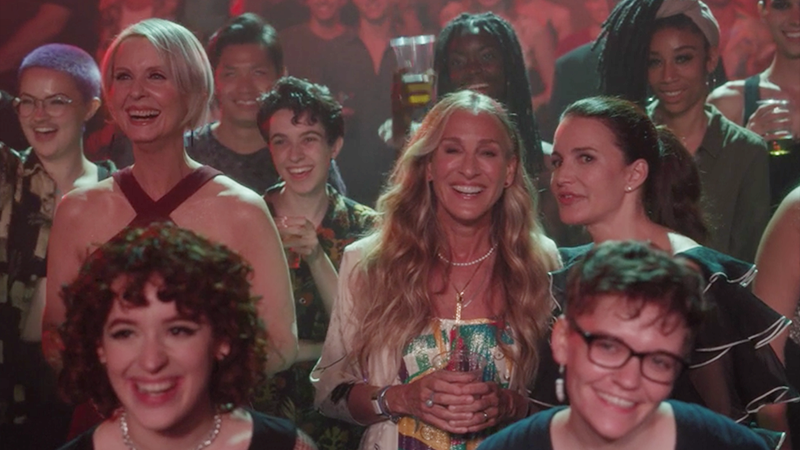 Miranda has a similar experience of falling, only less onto the floor and more completely and totally in love with Che Diaz. At Starbucks, while they’re waiting for Carrie to finish up her daily creeping, she tells Charlotte she doesn’t know if she and Steve are really in a relationship, or if they’re just roommates who both love their nightly ice cream routine.

And then off they all go to Che Diaz’s stand-up show, which is being recorded as a Netflix special. Che is somehow just as magnetic on stage as they are on their podcast, and in their one-on-one interactions. The audience is full of queer and trans Brooklynites, and Che’s talking about coming out as non-binary, about non-binary rep on TV and film, and about how everyone depicts trans people as walking around all lonely and sad with a single thunder-cloud over their heads while the Charlie Brown music plays. But that’s not their experience at all! Their family loves them, even though they’re confused by them; they have loads of friends; their career is on an astronomical trajectory; they’re sexy as anything no matter what they’re wearing; they’ve fucked or been fucked by two-thirds of the people in this room; and they have the face and charisma of Sara Ramirez. What else could a person want?

Che says most people want the boxes, because they’re comfortable, and it feels good to check stuff off. And then, a sermon: “You’re not happy with who you are? Step out of that box and change it! Change your address, change your job, change your mind, change your gender, change your shirt. I just wanna say, to all those people out there who are so sure — who write for TV and newspapers and magazines, to everyone who wants us to be alone and sad — I just wanna say, ‘Suck my dick.’ Actually, I don’t have a dick; if I did, I would have had this special five years ago.”

And then they drop the literal mic.

Charlotte goes outside and calls Rose and tells them that she loves them. She got some real bad advice from her cis gay BFF, Anthony Marentino, earlier. He said to just ignore Rose cause Rose is a kid and doesn’t know who they are and five years ago they thought they were a dog. It doesn’t sit right with Charlotte, but what Che says, that rings true. Charlotte is confused, but she loves her kid, and she’s gonna try so hard to get this right. (She’s also gonna get to the bottom of Miranda’s drinking and potentially the surprise rivalry she found out she has with Stanford, but maybe those two things can wait until tomorrow.) 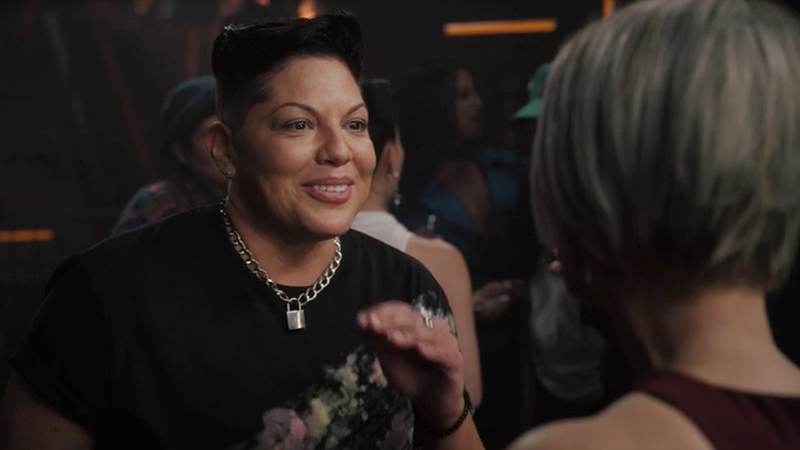 Did you not watch Grey’s Anatomy? I made most people gay back then. 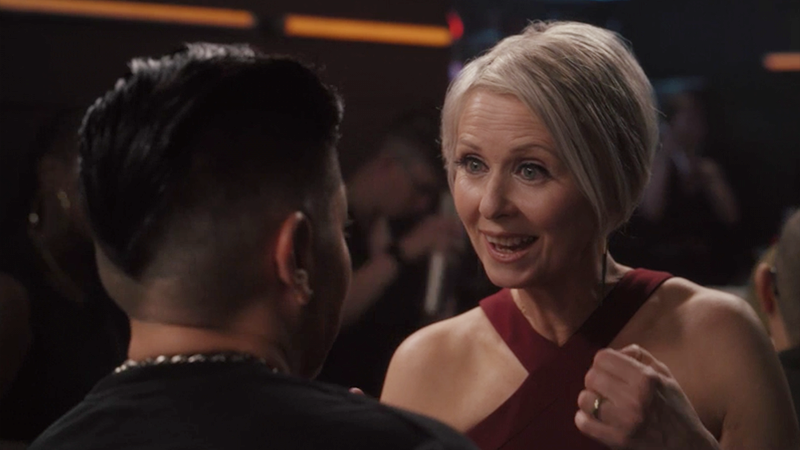 No I totally did but I spent the whole time worried about HIPAA violations!

Miranda just stands there in the stage lights stunned. Stunned. After shushing her friends, telling them they’re missing it, making literal cartoon heart eyes up at that stage, screaming and cheering with every queer in the crowd, she is amped. Miranda thought Carrie was wired earlier, but she herself is actual lightning right now. She’s been fine with her and Steve not having sex, she hasn’t even really thought about it. But now she’s watching Che on that stage and getting born again right there in that club in Brooklyn like it’s some kind of Baptist tent revival. And she is not going home! All that’s there is chia seeds and fro-yo and she’s got a VIP bracelet to get into Che’s afterparty (not a euphemism).

She whirls into the bar like a middle age tornado, talking like she’s on speed, even by her own very sparky speech standards, telling Che they’re a genius, a composer, a comedy prophet. Che’s face. They know. First of all they tell Miranda to take a breath for just a second before they pass out from revelatory lust. And then they offer Miranda a joint to calm down. Miranda says she can’t smoke. Che says it’s cool, they’ll just shotgun her. Miranda knows what’s coming but she is not ready. 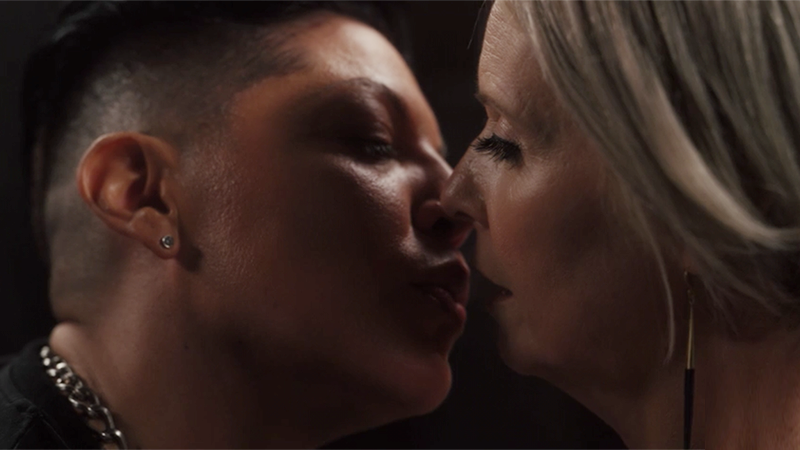 *whispers* I learned this from Naomily.

You know what you’ve never seen on TV in your entire life? A Mexican-Irish non-binary goddexx doing blowbacks with an uptight middle-age married woman who never even considered she’s anything but straight before now. This, my pals, is a first. A hot as literal hell-fire first and I know that I am not the only person who ended up on the floor watching it. (I actually for real know that because Autostraddle EIC Carmen Phillips told me she did too.)